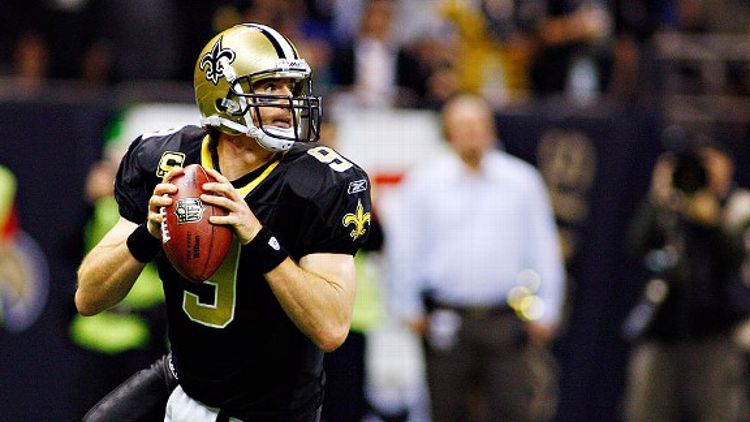 The NFL divisional round is my favorite week of the playoffs to gamble on. Disregard the fact that I haven’t make a dime off of it since long before Tom Brady bagged his first supermodel.

But let’s take a moment and look at last week. Despite my big prop bet going down (after the Lord and Dick LeBeau’s invisible defense allowed Tim Tebow to pass for twice as many yards as I predicted), I still managed to gain 1,000 jermajesties* for the weekend. That brings the year-to-date deficit down to a mere 374,750 jermajesties. Chump change. We’re cutting into the debt further with these stone-cold locks. And if this doesn’t work, there’s always the fallback plan of selling the first pictures of Beyoncé and Jay-Z’s baby Tebowing to the tabloids.

Drew Brees will throw an interception vs. the San Francisco 49ers (-160)
Yes – it will happen this week. It actually would’ve happened last week, too, if any number of Lions D-backs didn’t treat the football like it had the West Nile Virus. Faster San Francisco linebackers and slower turf could end up causing a huge timing issue for Brees and the Saints’ passing offense. 40,000 jermajesties

Tim Tebow over 11.5 completions vs. the Patriots (-110)
I know what you’re thinking. How can someone who hates the Tim Tebow phenomenon as much as I do bet on him to succeed? I look at it like this: when these two teams met up last month and the Broncos got crushed, Tebow completed 11 passes. (That was the Sunday God took off from football to lend a hand to tsunami victims and determine the rightful owner of Tupac’s sex tape.) And that’s after Denver jumped out to a sizeable lead. Transcendent Tim will have to do a lot better to compete with the Pats, who are expected to spot the Broncos two TDs at home. And now that I’m backing him with cash — sit back and enjoy as he completes only five passes and runs for 316 yards. 20,000 jermajesties

Total sacks in Texans/Ravens game over 4.5 (-155)
I actually think the Ravens can get this on their own. Both teams’ boast tremendous pass rushes and one of them has a shaky rookie quarterback with an even shakier backup (Jake Delhomme) waiting in the wings. Toss in another 1,000 jermajesties on over 3.5 first quarter intentional grounding calls if you can find it. 50,000 jermajesties

First TD scored in the Packers/Giants game: Driver (12/1), Jennings (5/1), Nelson (5/1)
I have a really good feeling that on Sunday at around 4:45 p.m EST, one of these three stud wide receivers will be Lambeau Leaping into the arms of an obese assistant manager from a Walgreens in Koshkonong, Wisconsin. 10,000 jermajesties each

Andre Johnson most receiving yards this weekend (8/1)
I know, I know. Two paragraphs ago, I killed T.J. Yates. But a pass-happy Texans team should be playing most of this game from behind. Plus this is as good a time as any for Andre Johnson to make up for screwing me and The Sports Guy out of our futures bet by not out-scoring celebrity dancer/part-time football player Chad Ochocinco by 1.5 TDs. Yes — believe it — that happened. 5,000 jermajesties

Over/under a blood-alcohol content of .25 for New York Giants defensive end Jason Pierre-Paul when he guaranteed victory over the Packers earlier this week
Good job, Jason! Way to wake the frozen giant. Or Packer, as it may be. This reminds me of the time another great man of Haitian descent, Wyclef Jean, predicted he’d become president of Haiti. And that didn’t come close to happening, either.

3/1 odds Mark Sanchez was the unidentified Jets player who said Mark Sanchez was a “lazy player” and “content because he knows he’s not going to be benched.”
He’s actually so lazy, he forgot to leave his name with the reporter.

Over/under 1.5 football fans who were not a fan of either Alabama and LSU but actually enjoyed the BCS Championship game
Judging by the postgame response, I may have been the only disinterested fan in the country who appreciated this game. I apologize to the rest of you who were forced to watch a hard-hitting, fundamentally sound defensive game that involved the only two teams in the country who know how to tackle.

Over/under 3.5 on a scale of 1-10 how much confidence is instilled in the Jacksonville Jaguars players upon hearing the news that their new head coach’s name is “Mularkey”
I realize Mike Mularkey has coached in the NFL for years and that his name is a letter or two off from a derogatory word. But knowing the name of the guy you’re trusting to turn the organization around is “malarkey” cannot be inspiring to the organization. On the other hand, if Mularkey doesn’t work out, the Jags can always replace him with Western Kentucky offensive coordinator Frankie Fullofshit.

Over/under $3.99 I would pay to see Floyd Mayweather Jr. go 12 rounds of Twitter trash-talking with Manny Pacquiao
It’s good to see that when he’s not beating up girls, Floyd is busy calling out his opponent in 140 characters or less. Unfortunately, it looks like the only KO we’ll see involving these two is going to have a hashtag in front of it.

I’m going under. Right now, a young Demi Moore and I are huddled up in an empty room shivering, waiting for the laziest remake in pop music history to end.

Karl Malone will deliver over/under 3.5 elbows to Jimmy Kimmel’s chin after he finds out my cousin impersonated The Mailman doing this ad for Salt Lake City

That’s that! Enjoy the divisional round of the playoffs.

The D'Antoni Defense: How the Knicks Stifled the Sixers