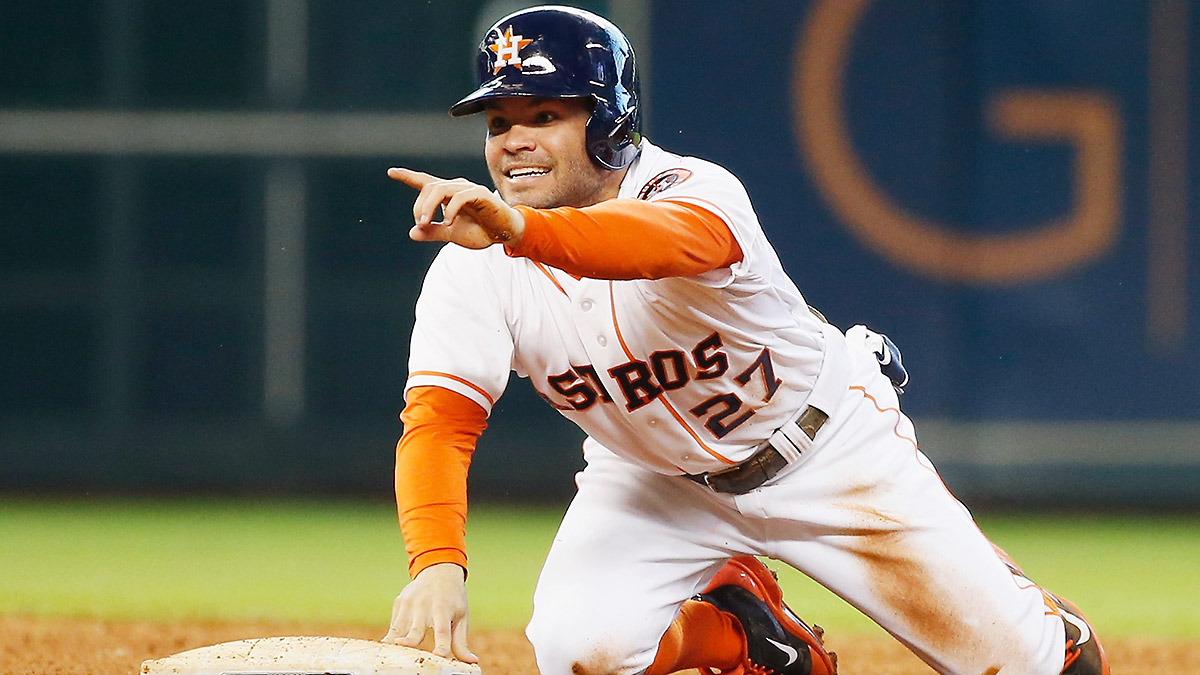 Jose Altuve is no longer just a short joke. I mean, he’s still short, and it’s still awesome — you’d think we’d be used to short guys playing baseball by now, but for some reason watching the 5-foot-6 Altuve is different from watching Jimmy Rollins, Dustin Pedroia, and Josh Harrison, all of whom are listed at 5-foot-8. Altuve’s got a little bit of that short-limbed, Kirby Puckett body to him, which makes it a sight to behold when he pokes a ball into the gap and hauls ass to third, arms churning and legs chopping at the dirt like he’s in a Road Runner cartoon. A couple of months ago, I saw Altuve in person for the first time, and trust me, it’s impossible to watch him run the bases and not feel happy.

There are lots of great athletes in baseball, and some of them are long and lanky and graceful, showcasing tremendous balance, explosiveness, and flexibility. Not Altuve. He belongs to the class that seems to skip everywhere, like he’s got Super Balls in his blood and isn’t entirely comfortable unless he’s running or jumping. That kind of athleticism is impressive enough when it’s in a normal-size person, but in a player Altuve’s size — and particularly one who, at 24, hasn’t lost the cherubic quality to his face — it’s adorable. Most people probably want to toss him some down-ballot MVP votes, bake him into a pie, and eat him.

This year, however, Altuve has stopped being an adorable curiosity and has become one of the best players in baseball.

While Altuve has been the face of the Astros for three years, it’s mostly been by default, because neither he nor his team was actually all that good until this year. In 2012 and 2013, Altuve hit .286/.328/.380 while averaging 32 doubles, six home runs, and 34 stolen bases in 46 attempts. That’s slightly below-average offensive production, and combined with OK defense at second base, it made Altuve the second-division regular that he was.

This year, however, Altuve has gone from being a second-division regular to a six-win player. He’s taken that step forward primarily by cutting out about a third of his strikeouts while simultaneously hitting for more power. Of Altuve’s 221 hits — a franchise record and the top total in baseball this year — 56 have gone for extra bases.

Somewhere along the way, when we were all reading Moneyball and internalizing that OBP and walks were good, we started to conflate on-base ability with drawing bases on balls. And while players who walk a lot tend to have good OBPs, it’s possible for a player who almost never walks to still be a good on-base guy and a good leadoff hitter if he hits for a high average and rarely strikes out. When the player in question hits .345 and strikes out just 7.7 percent of the time, the second-lowest mark among qualified hitters, you can hit him pretty much wherever and he’ll do fine.

That’s one way to identify a player with remarkable contact skills. Another is to pick out the player who can make contact with a pitch while doing a leaping pirouette. Altuve checks all the boxes.

Altuve has also become a better baserunner, stealing 54 bases in 63 attempts, an improvement in both volume and efficiency. Put together, the whole package gives Altuve a six-win season similar in form and value to the production generated by a pre-injury Brian Roberts.

Altuve has been a standard-bearer and a rallying cry for a franchise that’s taken some beatings on the field (this will be the first season in which Altuve’s Astros will finish fewer than 40 games behind first place) and off it. It’s possible he’s the first piece of the next good Astros team, particularly considering that he’s under team control through 2019.1

That doesn’t mean Altuve will continue to produce like this, of course. The first place to look to see if a player is having a fluke season is his BABIP. Hitters have more control over their BABIP than pitchers do, so you’d expect a guy with wheels and good contact skills to have a true talent BABIP above .300, but Altuve’s BABIP this year (.365) is significantly higher than his career mark entering this season (.317), and his batted-ball profile is right in line with his career norms, so it’s not like he’s hitting more line drives.

The other bad news is that speed, which is a big part of Altuve’s game, tends to decline from the moment a player gets to the majors, and how Altuve ages will depend in large part on how quickly his run tool degrades.

The good news is that Altuve is still very young for a player with his amount of major league experience, and that he’s at the age when power and plate discipline improve. The jump in BABIP is also not nearly great enough to explain the entire jump in his overall stats, which I’d mostly chalk up to Altuve cutting down so dramatically on his strikeouts.

In short, I doubt he hits .345 again next year, in part because of the reasons I just mentioned, and in part because a .345 batting average would be a high-water mark for 99 percent of the men who have ever played in the major leagues. But a lot of this growth seems legitimate, and if Altuve’s strikeout rate stays the same, it’s not unreasonable to expect him to produce closer to his 2014 numbers in the future than to what came before.