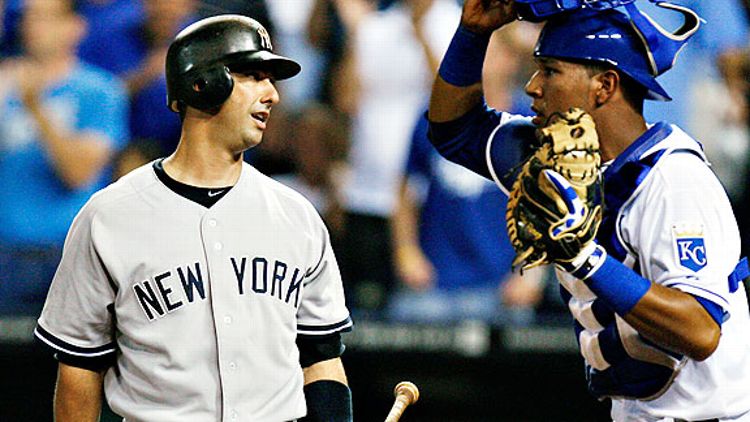 It had been an ugly season for Jorge Posada. Once a key cog in the Yankees dynasty, a winner of five rings and one of the greatest offensive catchers of all time, he’d lost his job behind the plate, been relegated to platoon duty, and was putting up the worst numbers of his career.

Last week, though, he had a shot at redemption. Posada was up to bat in the ninth inning, bases loaded, two outs, 1-2 count, down a run and facing Royals closer Joakim Soria. Sure, one at-bat wasn’t going to make up for a season in which he’d performed below replacement level, the modern version of undercutting the Mendoza Line. But a base hit here might, if nothing else, change the perception that Posada was hurting the Yankees every day he remained in the lineup.

By any objective standard, the pitch should have been called a ball. But that wasn’t the story of the game. Instead, Yankees fans lamented Posada blowing another one. This time, on his 40th birthday.

The Road Map for a Cubs Resurgence

Posada’s fall from grace has been magnified by two factors. He’s a member of the so-called Core Four, the homegrown group of Yankees which also includes Derek Jeter, Mariano Rivera and Andy Pettitte. For non-sentimentalists, Posada’s continued presence in the lineup blocks Jesus Montero, the latest gem from the Yankees farm system and the best hitting prospect in the organization. Why play the struggling old man (.241/.321/.386), when the kid seems ready to rake?

The Montero Legend took a huge leap forward Monday night. Playing the remainder of a suspended game plus a full game in what amounted to a virtual doubleheader, the 21-year-old slugger exploded, going 5-for-8, blasting two homers, and knocking in seven runs. After a slow start, Montero’s up to .290/.349/.456 for the year. Although skeptics wonder whether he can handle the defensive rigors of catching in the big leagues, most believe he’ll be a great hitter.

So why keep trotting out Posada when Montero would seem to be a better option? It might well be a matter of politics.

Veteran players are often hard to sweep aside — even when they’re well past their expiration date — and for the tradition-rich Yankees, it can be especially tough. When Jeter became a free agent last offseason, some started hammering the Yankees for letting their captain twist in the wind. Not that Jeter was done. At age 36, he seemed likely to have a year or two left as a viable starter. But with no other teams likely to pay a declining Jeter big bucks through his 40th birthday, the Yankees had leverage. Instead, team president Randy Levine threw in a few million more dollars and gave Jeter a player option that could make it a four-year deal worth $56 million when all is said and done. Face-saving, it seems, is another byproduct of not running a typical business.

Posada doesn’t have half of Jeter’s adulation. But he still has plenty of local support. When the Yanks announced earlier this month they were benching him until further notice, a mini-media firestorm ensued. When Posada finally returned to the lineup a week later, fans gave him a rousing ovation. If the Yankees called up Montero now, they’d have to make a decision on a 25-man roster player. Posada would be the most logical candidate to drop.

There’s also a potential alternate theory. The Yankees might opt to keep Montero in the minors until 25-man rosters expand next week, then they could give Montero a shot at the DH job. Thanks to an arcane rule that lets teams swap out a player on the 60-day disabled list with a call-up, Montero could become eligible to be the Yankees’ DH come playoff time.

Other factors could still come into play. Offseason signee Andruw Jones has been a monster against left-handed pitching; even if Montero got called up to DH against right-handers, Jones would likely remain the best bet against southpaws. Even more perplexing, Posada has actually put together a half-decent season as a platoon guy (.249/.354/.453), after a disastrous start to the year. Despite Montero’s recent surge, Posada’s line against righties compares favorably with the kid’s overall numbers. The old man may not be quite dead yet.

So what to do? Montero’s tantalizing talent still has Yankees fans drooling to get a look at him — a chance they might get in September. If Montero succeeds, Posada might get left off the postseason roster, his days as a Yankee over for good. Whatever decision gets made, Yankees fans should hope it’s based on performance, not politics. You can get away with a sub-optimal roster when the Baltimore Orioles, Kansas City Royals and Seattle Mariners are on the schedule. But in the postseason, you’d better bring your best 25 with you. Or else.

The Huddle: It's Time to Catch Something, Roy Williams