Johnny and Jameis and Why College Football Works 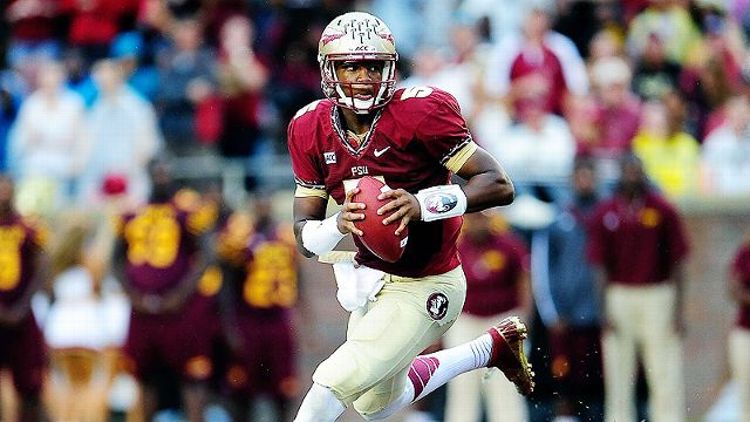 Last weekend I was talking to a friend who doesn’t like college football. This is a perfectly reasonable opinion when you remember what we’re talking about. College football is screwed up in so many different ways that it’s impossible to keep track of just who’s getting screwed at any given moment. Except you never forget about the players — the players are always getting screwed. So yeah, there are good reasons to spend your Saturdays doing something else.

But my friend said he didn’t like college football because it’s too hard to keep track of all the changes every year. It’s all too much to process for someone who actually has a life — new stars, new good teams, new coaches.

We’re halfway through another season, so this is as good a time as any to explain why college football is worth the effort if you’re not already obsessed with this stuff — even with the BCS, the greed, the shady rules, the insufferable reign of Alabama, and the constant turnover everywhere else. It’s all worth it. We could list any number of reasons to explain this, but for me it really starts and ends with the players.

Take Jameis Winston. He’s playing Clemson in the biggest game of the college football weekend, which means millions of fans across America are about to meet him and get addicted like the rest of us. In case you’re not familiar with his work at Florida State this year, it all started with an outstanding performance at media day, where his achievements included (a) refusing to choose between cheese balls and championships, (b) promising an old white reporter he could make him comfortable in a black church, (c) doing the MC Hammer dance, and (d) everything here, basically.

If you were designing a football cult hero from scratch, he would come out looking pretty much exactly like Famous Jameis. He’s from a tiny town in the South (Hueytown, Alabama), he’s smart, he’s funny, he’s got great nicknames (Jaboo is another one), he’s described as a natural leader by pretty much everyone around him, and he’s got the kind of limitless myth surrounding him that would’ve applied to Bo Jackson and Herschel Walker 30 years ago. This piece from David Hale captured all that before he ever played a down. Then the season started, and it turned out Jameis Winston was twice as awesome as advertised.

• 393 yards and five touchdowns against Maryland

• In that same Maryland game, a work of art and/or Manzielery in which he bent his way out of a sack, peeled out of the pocket, and threw an impossible strike to the corner of the end zone

• The Hail Mary against Boston College, where he weaved through a pass rush for five seconds and then threw a 60-yard touchdown as the first half expired

With Clemson, he’s getting a tougher test than he’s seen all season — a top-three team with a star QB of its own, a good defense, and a batshit insane crowd. This means it’s the perfect stage for an outrageous season to hit a whole other stratosphere.

But regardless of how he responds this weekend, I’m pretty sure the Jameis Winston Takeover is happening regardless. Right? He’s too good and too much fun. It’s only a matter of time before the whole world gets hooked.

If the takeover feels familiar, that’s because we did all this last year with Johnny Manziel. Now we’re in Year 2 of Johnny Football, and it just keeps going. I’ve already said that he is Lord of the Douche Bags and impossible not to love, and that was before he went and lit the Alabama defense on fire for 562 yards and five touchdowns.

It doesn’t matter that he threw two interceptions and lost the game. That day of Johnny Football will probably end up being the most memorable, mind-blowing football I watched all year. Meanwhile, the Aggies are 5-1 after surviving Ole Miss last week and still very much a factor in the title race. And after a summer when just about everyone on earth questioned his commitment, Manziel came back twice as good this year.

And still every bit as ridiculous.

These guys are mirror images in some ways — players who started as 19-year-old redshirt freshmen and replaced first-round draft picks at quarterback, all while making it look way too easy. Jameis and Johnny are full of improvised brilliance, still refining their games, and shredding defenses in the meantime.

They’re different, too. Winston doesn’t make as many plays running, and Manziel’s deep ball isn’t nearly as flawless as Jameis’s bombs. For someone who talks endless shit on the field, Manziel is pretty reserved when it comes to off-the-field interviews. Winston is the inverse: not all that flashy on the field, but he’ll talk to any reporter about cheese puffs and make you feel comfortable in a black church. Plus, as Winston told reporters at media day, “If I ever get Manziel disease, I want all of you to smack me in the head with your microphones.”

Venn diagrams aside, what really brings them together is they both make college football irresistible to anyone paying attention. Jameis Winston may not win this weekend, Johnny Manziel may not win a national title, but whatever happens, they are why this all works.

Don’t get me wrong: College football is a fucking mess for all kinds of reasons. The NCAA somehow manages to be the most nakedly corrupt organization in sports AND the most incompetent. Players at the best programs are generally giving up any chance at a real college education because the practice schedules are so insane that studying is pretty much impossible. Psychopath coaches like Urban Meyer and Nick Saban are the closest things we have to living gods in 2013 and they wield that power daily. A large percentage of the discourse around this sport starts with hot-take champions like Paul Finebaum. TV money has overhauled the conferences beyond recognition. The bowl system is somehow more of a scam than the NCAA itself. And on and on it goes.

You could write a new article every week about why this sport is a complete disaster. And people do! We talk constantly about everything that’s wrong with college football.

But today, halfway through another season and before FSU-Clemson on Saturday night, it’s more fun to explain why college football will work forever:

1. No American sport has more insane, passionate fans sprinkled across the entire country, and they all seem to be drunk and in a good mood. That’s a whole separate conversation, but the fans keep this sport relevant no matter what happens.

2. Even if you’re like me and don’t really have a favorite team, every year gives you new players and teams that will blow your mind all year long.

There may not be a sport on earth with more problems than college football, but it works because it gets the big stuff right. Even with a playoff and when they finally decide to pay players, it will never be perfect or fair or anything but a sport built on greed and hypocrisy, and it’ll never matter.

Because sports are 10 times cooler when you’re watching superstars look supernatural, and we get that from college football every year. There’s always someone new to come out of nowhere and make the most ridiculous myths feel real. Like Johnny Football in that Alabama game. Or 19-year-old Jameis these first two months. Or whatever crazy shit happens over the next few weeks.

Where the NFL takes guys like Herschel Walker and Bo Jackson or Vince Young and Cam Newton and sends them crashing back to reality, reminding us that nobody’s bigger than the game, in college, the most exciting players on earth really do seem bigger than the game for a few years at a time. We all get swept up in it, and the memories stick with us forever. Kinda like the way you’d remember an amazing party.

Then the next season starts, and there’s someone new to win us over with legends and highlights all his own. After Johnny there’s Jameis, and then who knows?

The 10 Greatest Anti-Riveras of the NHL (Ranked!) (Again!)