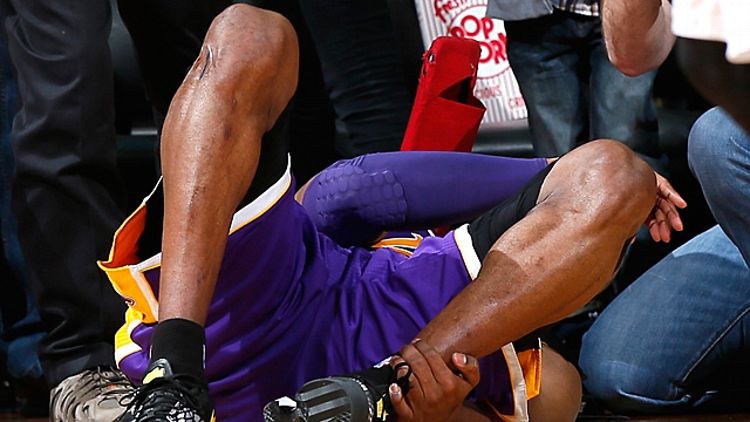 At the end of last night’s Lakers-Hawks game, with L.A. down two and three seconds to go, Kobe Bryant (guarded by Dahntay Jones) attempted a baseline jumper to tie things up. His shot rattled out and Kobe collapsed to the floor, clutching his leg in pain. In replays of the incident, it appears as if Jones intentionally left his leg underneath Bryant as he landed. Kobe certainly seemed to think that’s what happened, tweeting this out after the game:

#dangerousplay that should have been called. Period.

In his own Twitter reply, Jones professed his innocence:

Tape doesn't lie. Ankle was turned on the floor after the leg kick out that knocked him off balance. I would never try to hurt the man

But you can see why Kobe might be suspicious of Jones; he had a similar incident with Jones, then on the Nuggets, back in 2009:

Jones apologized for the 2009 incident on Twitter last night. But maybe Kobe’s just ultra sensitive about the whole leaving-a-leg-out thing in general. After all, there’s an unwritten rule in basketball that you just don’t do that. (I know this from Jalen Rose.) And Jalen Rose should know, because he did it to Kobe in the 2000 NBA Finals. It’s something Kobe certainly remembers. Here’s how he described last night’s incident with Jones: “he Jalen Rosed me.”

So did Jalen Rose purposefully stick his leg under Kobe in the Finals? In an interview with David Jacoby on the Grantland Channel, Jalen admits he “can’t say that it was an accident” and explains why Dahntay Jones might want to watch his back in the future: