It Wasn’t All Your Fault, Bobby V 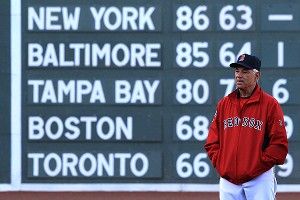 Here’s the thing about Bobby Valentine’s miserable season running the Red Sox: It probably wouldn’t have gone much better for anyone else.

You can talk about team chemistry, disputes with players, strained relationships with media, or anything else that makes for fun venting on WEEI. The bottom line is the Red Sox pitched terribly, and their best players either regressed sharply from last season, got hurt, or both.

Boston was the fifth-worst pitching team in baseball with a 4.41 mark in Fielding Independent Pitching. Jon Lester gave up a run and a half more per game, partly due to bad luck and poor bullpen and defensive support, and partly because he threw a bunch of meatballs. Josh Beckett was awful. The bullpen was Chernobyl-esque, which might’ve partly been due to Valentine’s usage patterns but mostly happened because the guys he put out there simply couldn’t get anyone out.

The lineup got unexpectedly strong contributions from a few Cody Ross types. But Dustin Pedroia had his season wrecked by a thumb injury, Kevin Youkilis looked old and hurt in his own right before being shipped off and replaced with Will Middlebrooks (who then went down with a wrist injury), David Ortiz was great but then missed a big chunk of games at year’s end, Adrian Gonzalez failed to live up to expectations, and Jacoby Ellsbury went from MVP candidate to scrub.

Maybe another manager coaxes a few more wins out of this bunch. Certainly another, more reserved manager could have caused less hand-wringing for his bosses by being less public about beefs with players and other issues. But teams have disappointing seasons all the time. And for the 2012 Red Sox, everything that could have imploded did. Even an army of Connie Macks, Casey Stengels, and Dr. Phils wasn’t going to change that.