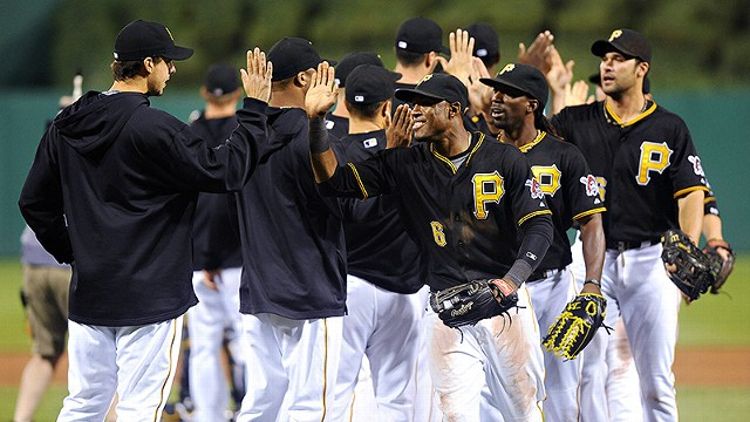 It’s become something of an annual tradition — the Pittsburgh Pirates enter July in or near first place, buoyed by the inspiring play of Andrew McCutchen, some surprising pitching performances, and the likes of Pedro Alvarez not being quite as bad as we expected. We spend late June and early July being buried under an avalanche of well-meaning but patronizing articles and blog posts about how the Pirates haven’t even had a winning season since Barry Bonds left for San Francisco, before his head and home run totals came to be larger and more explosive than a zeppelin.

Then the inevitable happens — the Bucs fall quickly and disastrously back to earth, failing for one more agonizing year to even win more games than they lost, and everyone looks around for an explanation, whether it’s Jerry Meals blowing a call at home plate in a 19-inning loss to Atlanta or Clint Hurdle over-managing or the National League collectively realizing that just because Charlie Morton said he’d turned himself into Roy Halladay doesn’t mean they have to hit him like he’s Roy Halladay.

Well, it’s July 1, and the Pirates are in first place, once again playing a little over their heads, and I’m going to toss my well-meaning but patronizing blog post onto the pile.

Except this year, they’re not going to collapse.

But this is the year they finish better than .500 for the first time since Czechoslovakia was one country. It might even be enough to land the Pirates in the postseason. And here’s why:

These Pirates are better than the Pirates of 2011 and 2012. McCutchen and Neil Walker are producing in the way we’re accustomed to seeing, but the rest of the offense is demonstrably better in 2013. Alvarez’s 20 home runs are much more impressive in this new, depressed scoring environment, and for all the concern over his platoon issues and plate discipline, his .304 OBP is actually not too far below the National League average. Starling Marte, another young, homegrown talent, finally looks like he’s putting it all together, with a .288/.343/.466 slash line. Russell Martin, who is (hilariously) the Pirates’ richest-ever free-agent acquisition, is proving to be a bargain himself, handling the pitching staff and hitting well enough that he’d be worth putting in the lineup solely for his offense.

All told, the Pirates have seven regulars or near-regulars with a league-average OPS+ or higher. If there is a problem going forward, it isn’t going to be the offense. It remains to be seen how long Jeff Locke can continue to post an ERA around 2.00 with a K/BB ratio less than 2, and even Pittsburgh’s more established pitchers — A.J. Burnett, Francisco Liriano, and Mark Melancon — all have some pretty high-profile self-immolations on their résumés. The pitching staff in Pittsburgh, more than the offense, has beaten expectations so far. It might not fall apart all at once (or, if the 2012 Orioles are some harbinger of the future, it might not fall apart at all), but even if it does, the Pirates are in a much better position to withstand a losing streak now than in the past.

The Pirates, exactly halfway through their schedule, have banked 51 wins, all of which count, even if Liriano’s arm falls off again or if Locke goes in the tank. In order to finish with a losing record for a 21st consecutive season, the Pirates would have to go 29-52 the rest of the way, a .358 winning percentage. Nobody, not even the experimental Astros or the burn-down-the-failing-bar-to-collect-the-insurance-money Marlins, has been that bad this season. If Pittsburgh is even a 40-41 team the rest of the way, it finishes with 91 wins, which would have been good enough for the second wild-card spot last year, and (if it had existed) every year dating back to 2002 (if you count a potential tie in 2004). What’s more, there’s not a whole lot of competition for that spot — the NL Central’s top three teams are about to lap everyone else in the league except for Atlanta. Pittsburgh currently has a 5½-game lead on the Reds, who are in line for that final playoff spot, plus a further 4½ games on the Nationals, who are the closest team to catching Cincinnati.

Even a winning season of any kind, much less a playoff berth, would be huge for the Pirates from a marketing standpoint. When Pittsburgh fans come out, they come out in great numbers and with great passion — these are, after all, the same people who’ve talked themselves into Hines Ward, James Harrison, and Brooks Orpik being the “good guys.” But even the most passionate fan bases need to be mobilized. We all know how well-supported the Penguins are now, but 10 years ago, they were playing to a mostly empty Igloo and were on the verge of moving, before the NHL rigged the draft lottery Sidney Crosby arrived.

This has to be encouraging for the Pirates, because they’re going to have a lot to market in coming years. Former no. 1 overall pick Gerrit Cole is already in the majors, with Jameson Taillon and Gregory Polanco likely to join him by this time next year. The tradition of the Pirates being in first place in late June looks like it’s going to continue for years going forward. The traditional second-half collapse? Not so much.