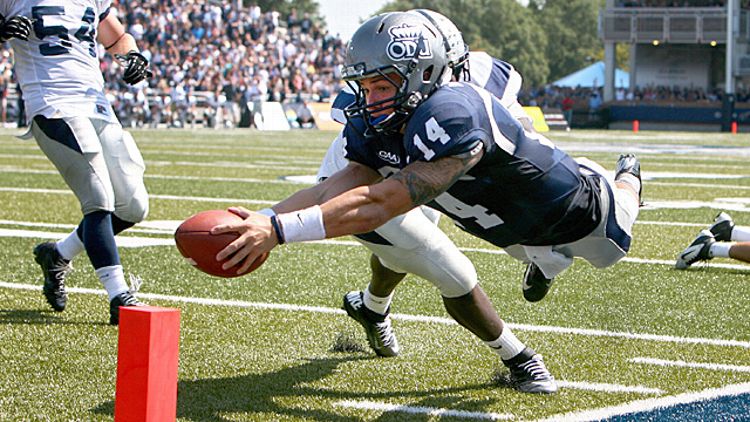 By most standards — or at least the standards in place to evaluate a season opener against East Carolina — Old Dominion quarterback Taylor Heinicke’s performance last Saturday was heroic. The junior ran up a 38-of-51, 338-yard, 3-touchdown, 0-interception passing stat line while running for 52 yards and a touchdown on 11 carries. Old Dominion fell short in a 52-38 shootout, but the importance here wasn’t that Heinicke was fighting for the Monarchs’ first win as an FBS school; it was that he was fighting for the football relevancy of his entire state.

Heinicke’s Saturday looked more pedestrian in the face of Jameis Winston’s Scanners special against Pitt as well as Heinicke’s own 730-yard day against New Hampshire last season, but let’s look at it this way: He nearly doubled Virginia and Virginia Tech’s combined passing totals from this past weekend. Neither team runs the option, and both were putting guys out there with starting experience. A 3.6 yards per attempt is pretty dismal for a plodding running back. That was the yards per passing attempt for Virginia’s David Watford, who rang up a 18-of-32, 114-yard box score. Meanwhile, I understand that Logan Thomas was always going to struggle against Alabama, but not even Reggie Ball ever threatened to put up 59 yards on 5-for-26 passing. When was the last time an ostensible NFL prospect put up the kind of completion numbers that instantly reminded you of a particularly carefree night from J.R. Smith?

The state of Virginia is certainly a big enough state to accommodate three FBS programs, and it’s always been an incredibly fertile recruiting territory. The 757 area code could definitely be called a hotbed, and Old Dominion is actually in Norfolk. And though Heinicke is from Atlanta, he plays like he’s local; nearly all of the Tidewater region’s best quarterbacks have been dual threats like himself — Aaron Brooks, Michael Vick, Tajh Boyd, Ronald Curry, EJ Manuel, Allen Iverson.

In that sense, Old Dominion appears to be the only Virginia team playing the kind of fast-break offense you’d expect given the talent in the region. As a true freshman, Heinicke took control of the Monarchs at midseason and put up stats that transcend “video game numbers” because everyone knows that NCAA Football 14 on any level will force you into at least two bullshit interceptions per game.

Last season, Heinicke completed nearly 69 percent of his passes while racking up 25 touchdowns and one interception over the span of nine games. And that interception came on a Hail Mary. He won the Sweetness Award (unofficial, but better name for the FCS best offensive player in the FCS) in 2012 with the same completion percentage, 5,076 passing yards, 44 passing TDs, 11 rushing TDs, and 14 picks (which is excusable when you throw the ball 579 times).

This is the sort of thing that Old Dominion can use to its advantage going forward, particularly when trying to recruit offensive skill players.

Think about it — when was the last time watching Virginia or Virginia Tech was fun? Last season, the Commonwealth Cup saw Phillip Sims and Logan Thomas line up for the Cavaliers and Hokies, respectively. Based on what we saw in that game, if the two of them ended up battling it out in the second quarter of an NFL preseason game, it wouldn’t be too big of a surprise.

Yet, after failing to fully depose the considerably less decorated Mike Rocco last year, and showing almost no positive intangibles whatsoever going into 2013, Sims transferred to Winston-Salem State. Meanwhile, Thomas reminded you that a former high school tight end playing quarterback is something desperate intramural teams do, as he regressed badly during Virginia Tech’s worst season in ages. The Hokies ended up with a 7-6 record, the sort of thing they hadn’t experienced since their time in the Big East, and 2012 ended fittingly with a cornea-searing 13-10 win against Rutgers in a bowl game I won’t dignify by naming.

In other words, perhaps Old Dominion has a window of opportunity to go beyond replicating its basketball team’s success and achieve something similar to Shaka Smart’s Virginia Commonwealth squad. If it can’t exactly manage the postseason success, Old Dominion has the ability to recast “Havoc” as an offensive force, making its name with a breakneck, TV-friendly style of play that differentiates it immediately from its stodgy counterparts in the state. It’s a shame that Old Dominion won’t be playing a full FBS schedule until next year and will be facing off against the uninspiring likes of Pittsburgh, Idaho, Maryland, and North Carolina this season. And maybe that window is closing: Watford’s keeping the seat warm until Greyson Lambert proves he might be the one blue chip UVA quarterback recruit who doesn’t flame out, and this being Virginia Tech, it’ll probably be 10-1 before we even blink and will beat Clemson in the ACC Championship. Or it’ll lose to Boston College and still beat Clemson in the ACC Championship, because these things happen in the ACC.

But in the meantime, Heinicke is almost certain to come back for his senior year and we’ll have Old Dominion setting itself to be the East Coast’s preeminent (if not only) pure-offense football team and maybe the greatest instant FCS-to-FBS success in history. If it doesn’t honor the state’s long-honored football tradition of blowing things just when it’s starting to look good.

The Grantland NFL Podcast with Bill Barnwell and Robert Mays