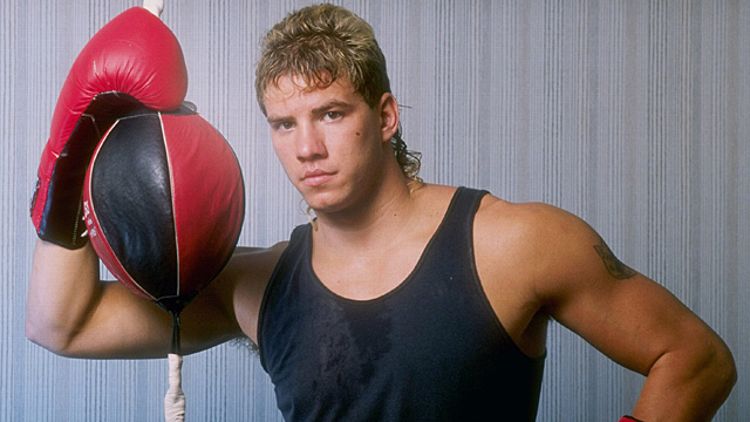 Tommy Morrison died late Sunday night at the age of 44, ending one of the most tragic and bizarre lives in a sport defined by tragedy and the surreal. All professional sports rely on the exploitation of the body, but I wonder if there has been an American athlete in the past 25 years who faced such a disparate, weird range of degradations. After turning pro at the age of 19, Morrison came up the way of every Great White Hope before him, garnering too much media attention for the anomaly of his skin color and his knockout power. It was a label he resisted. “It’s racist,” Morrison would later tell Sports Illustrated’s Richard O’Brien. “Second, most White Hopes never make it.” But like it or not, Tommy Morrison, who claimed to be the grandnephew of John Wayne, didn’t have much choice in how he would be processed by the boxing public.

Before Morrison reached legal drinking age, Sylvester Stallone spotted him training in a gym and recruited him to play the role of Tommy Gunn, a brash, young up-and-comer, in Rocky V. When the film was released in November 1990, Morrison had amassed a 24-0 record, beating up journeymen and club fighters. Rocky V shot Morrison into a new strata of stardom. His next fight came against James “Quick” Tillis, a fighter best known for being an opponent to two generations of heavyweight stars. Before fighting Morrison, Tillis had fought an 18-0 Evander Holyfield, a 19-0 Mike Tyson, and a young Tim Witherspoon. Morrison knocked out Tillis in the eighth. The hype picked up and crested when Morrison entered the ring against Ray Mercer, an undefeated Olympic gold medalist, in October 1991. A win against Mercer would have mostly likely put Morrison in a super-fight against Evander Holyfield or Mike Tyson. A loss would relegate him back to Great White Hype status. Morrison was knocked out in the fifth round.

Morrison’s life began to take its public, tragic turn after the loss to Mercer. In 1993, he was arrested for punching out a University of Iowa student. He picked up a reputation for excessive partying and sometimes violent confrontations in bars and nightclubs. But he kept knocking out whatever journeyman got placed in front of him and in 1993, he earned a title shot against George Foreman. In a terrible, awkward, and ultimately damaging bout, Morrison won a 12-round decision, despite getting booed by the crowd for the majority of the fight. He was champion of the world. Four months later, Morrison would lose the title when Michael Bentt, a journeyman with a grand total of 11 professional fights, knocked him out a minute and a half into the first round.

Morrison’s career had to be rebuilt once again after the loss the Bentt. In 1995, after regaining some of his former shine by knocking out Razor Ruddock, Morrison fought Lennox Lewis in a farce of a fight that Lewis won by knockout in the sixth round. Still, there was some hope that Tommy Morrison could become something in the sport — if not a champion, then at least a weird sideshow that could put butts in seats.

Then, in February 1996, Morrison tested positive for HIV. Not believing the prognosis, he had another test administered by a doctor of his own choosing and once again the test came up positive. He quit boxing, leaving behind a three-fight, $38 million contract. Eight months later, he resurfaced with talks about one last bout for charity. Soon afterward, according to an excellent profile by Elizabeth Merrill, Morrison began to deny the existence of HIV, citing his own Internet research. As the public turned away, Morrison imploded. He was arrested several times on public intoxication, DUI, and weapons charges. He began loudly advocating the “conspiracy of AIDS.” In 2007, he released a series of HIV tests to the New York Times, two of which showed no existence of the virus in Morrison’s blood. The Times administered its own test and released the results to HIV experts, all of whom concluded that Morrison had been the victim of two false positive tests back in 1996. And even though there were grave questions about whether or not Morrison had submitted his own blood, the evidence was convincing enough for Morrison to fight twice more, once in West Virginia, and again in Mexico.

Morrison mostly disappeared after that. In September 2011, he was arrested on a drug possession charge. In a mugshot that made the usual Internet rounds, Morrison, then 42, looks like an aging, deranged vagrant. From then, again according to Merrill’s report, Morrison retreated into his illness. For the past year, he slowly wasted away in bed before finally succumbing to organ failure.

There’s almost nothing good to say about the life and career of Tommy Morrison. He, like so many other fighters before him, regressed into a life of substance abuse, psychosis, and delusion by the age when most people are seeing their children through adolescence. Even his fictional character in Rocky V has been derided and cast aside in the dump heap of bad-idea sequels. His HIV diagnosis was only made more tragic by his repeated attempts to disprove it, and I suppose in the history of sad, shot fighters hanging on, there hasn’t been a spectacle as weird as a man claiming to have been the victim of a false positive test, who climbed back into the ring for any boxing commission who would license him. It’s only sadder that the same man would die six years later from organ failure, at the age of 44, broke and mostly forgotten.

Boxing is stingy with its graces, but if you have won a world title at any point in your career, you earn the right to be called a champion for the rest of your life. In many of the remembrances that surfaced yesterday, several referred to Morrison as “champ,” and I suppose in this brutal and oftentimes maddeningly awful sport, that sort of token gesture is the best we can do.