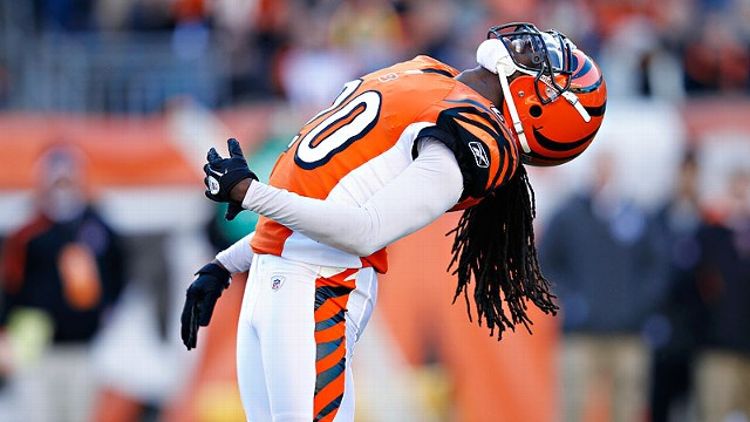 The glamorous life of a jet-setting sports columnist, just like you pictured it: I spent the night before the Bengals’ big wild-card-slot-clinching victory over the Steelers on and off the cold tile of my wife’s parents’ downstairs bathroom, food-poisoned like whoa.

I won’t go into detail. It was violent. The puking was the good part. But it felt right. It felt purgative. Sweat-lodge stuff. I was voiding an entire season’s worth of karma and bad decisions. Everything must go.

Between episodes, instead of sleeping, I read (1) a really comprehensive article in a November-vintage People magazine about Halle Berry’s new man beating up her old man at Thanksgiving, and (2) the last hundred pages of Don DeLillo’s End Zone, narrated by Gary Harkness, the nuclear-war-obsessed running back of a West Texas college football team whose players all talk like Don DeLillo. It’s DeLillo’s second book, from 1972, and you can probably find it used under a variety of groovy key-party-era-redolent covers, and you should, because it’s great, and funny in a way that made me hate Don DeLillo a little bit. As someone who has spent a bunch of time this year trying to write deadpan jokes about football, finding out that DeLillo wrote a whole novel in this mode 40 years ago was demoralizing. Were you not better than me at enough things already, Don DeLillo, you dick?

From Chapter 19, which documents — over the course of 27 virtuosically jargon-clotted pages — every play of a game between Harkness’s Logos College and their rivals at West Centrex Biotechnical Institute:

The exemplary spectator is the person who understands that sport is a benign illusion, the illusion that order is possible … The exemplary spectator has his occasional lusts, but not for warfare, hardly at all for that. No, it’s details he needs — impressions, colors, statistics, patterns, mysteries, numbers, idioms, symbols. Football, more than other sports, fulfills this need. It is the one sport guided by language, by the word signal, the snap number, the color code, the play name. The spectator’s pleasure, when not derived from the action itself, evolves from a notion of the game’s unique organic nature. Here is not just order but civilization.

Which is what I’ve been trying to say all along, kind of.

At some point I lost consciousness; I woke up feeling semi-stable, reassured my wife and my in-laws that I’d survived the night, and walked out into the cold to look for a bar that had the Bengals game on, figuring — this being Pennsylvania — that I’d root on the DL in a bar full of hollering Steeler fans and write snide little notes about that experience like I do about every experience of my snide little life. This was not to be. Every bar in my wife’s parents’ town either had the Eagles game on, or no football at all — The Bar With A Western-Movie-Sounding Name Where They Make The Beer Right-Churr In That Big Brass Thing Over Yonder, The Saddish Old-Man Bar, That One Place Upstairs Where We Played A Shit-Ton of Golden Tee While Listening to Deeper Than Rap Back When Everybody Still Smoked And They’d Let You Do It In There. No dice, no dice, no dice.

Finally, at a sports bar called Quotations, the bartender told me, quote, “Nobody on State Street [my wife’s parents’ town’s main and only drag] has Sunday Ticket,” unquote. I walked back down the hill to my wife’s parents’ house — dehydrated, probably, maybe delirious, trying to convince myself that missing what might be the end of the Bengals’ run would be the I Suck At Football equivalent of a burnt-out Steven Spielberg not being on the set of Jaws the day they blew up the shark — and decided to find out how hard it was to glom a pirated feed of a live sporting event on the Internet. Ninety seconds later I had an only-slightly-pixelated stream of the game up and running, just in time to see Andy Dalton get sacked twice in a row.

So I broke the law, and thereby watched the Bengals clinch a postseason slot, on the futon in my in-laws’ guest bedroom, under two framed pictures of my wife kicking it with Oscar and Ernie at Sesame Village in the ’80s — one in which she’s young and super-amped to be there, and one in which she’s clearly two or three years too old and too tall for Sesame Village and appears appropriately mortified.

I wish I could tell you more about what it felt like to win this game. I’m not sure I can, except to say that strangers tweeted at me after it happened, excitedly, like we’d all won something together, and I felt like an accidental crowd-surfer. I don’t feel entitled to this win, or to the feelings of redemption that are supposed to go with it. I’m Marty McFlying this bandwagon.

A few weeks ago at a Christmas party, my colleague Lord Kelvin and I got to talking about this column, and my whole football odyssey, and what it feels like when your team wins or loses. I told him I hadn’t realized how caught up I was in all this until the Bengals lost to the Cowboys in early December after winning four in a row. “It’s easier to tap into the feeling of losing than it is to tap into the feeling of winning,” Lord Kelvin said — meaning, I think, that the emotions around a win are always bound up with history and rivalry and other intangibles you can’t fully appreciate without having kinda put the time in, whereas the sense of losing, the suckiness of losing, is pretty much an entry-level experience, emotionally. Lord Kelvin is a Jets fan; I trust him on this.

For what it’s worth, that game against the Steelers didn’t even really look like a win as it was happening. Honestly, up until the last four seconds of the fourth quarter — when Josh Brown kicked a 43-yard field goal that put the Bengals up 13-10 — it looked an awful lot like the Bengals trying time and again to get something going running-game-wise and having those attempts repeatedly and systematically rammed down their throats by the Steelers’ comparatively Gamorrean defense. And even that Brown field goal came just a little over three minutes after Brown attempted to kick a field goal longer than any field goal in the history of Heinz Field and, go figure, failed. This is how it ends, I thought, and in that moment I realized I’d come to a kind of peace with it, with losing, and then three minutes later I was forced to recalibrate. But I still have that pathway in my brain, the one where I’m OK with losing. From here it’s on to Houston, and I am ready to be heartbroken. Or not.

This one goes out to anybody who has voluntarily rooted for the Bengals for more than 17 weeks:

We Went There: Adrian Peterson's Near Record