We Went There: Adrian Peterson’s Near Record 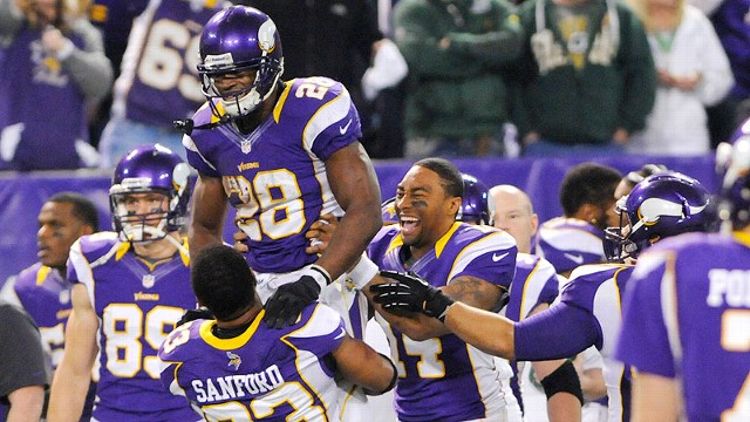 Have you ever seen a more desperate run than Adrian Peterson’s last run of the 2012 football season? Not just in the NFL, but anywhere — like to the bus stop or across the lawn or down the stretch at the track? With 24 seconds left on the clock, on Green Bay’s 37-yard line in a tie game, AD needed 35 yards to break Eric Dickerson’s record. He grabs the handoff and follows his fullback. He diverges from his lead as soon as said fullback pops a linebacker and instantly drives 12 yards downfield. At the 26-yard line he weaves 30 degrees inside for five yards, and then it all gets a little Butch Cassidy and the Stanford Marching Band. He looks like he’s being chased by the entire Green Bay 53-man roster. He bends his shoulders back toward the sideline right before two Packers jump on his back at the 17 and he carries the two of them in a sort of crescent-shaped path to the 11 before he falls over and the Vikings call timeout.

There is chaos. Everybody in the Metrodome — whether wearing purple or green and gold — seems bewildered. Did he get it? Wait, he didn’t get it? He has to wait along with everybody else for a 5-foot-2 person to kick a chip-shot field goal. Afterwards, he is hoisted on somebody’s shoulders.

He finishes the game with 199 yards. The Vikings win, but AD’s season total of 2,097 yards is short of Eric Dickerson’s record 2,105. After the game, Chuck Klosterman tweets “that non-record is better than the record.” Maybe Chuck is implying that it’s because Peterson’s a living folk story, the complete halfback heroically leading an old-fashioned team that needs every single rushing yard in order to beat a pass-centric machine of an opponent. Or maybe his tweet is meant to credit Peterson for becoming just the seventh human to rush for more than 2,000 yards in NFL history, doing it exactly one year to the day after having his ACL rebuilt in Dr. James Andrews’s operating room. Or maybe it’s because Chuck’s a Packer fan and there’s some perverse Upper Midwestern thing going on there.

Whatever it is, it does seem fitting that Peterson came up only eight yards short. Part of it is that charm of seeing the achievement of a team goal over the achievement of an individual one, but it’s also because Peterson is one of the most intense athletes in sports, a perfectionist who sits in the cold tub next to his backup Toby Gerhart after each game and ruminates over yards left on the field. In the press conference after Sunday’s game, he thought about where he could have picked up those eight measly yards, and he ended up lamenting a couple of fullback leads where he cut back inside after getting “spooked” by a defensive end or a free safety — he couldn’t remember the defender’s exact form, only the sensory instinct he inspired — rather than trusting the play design. Any fantasy football duffer understands the cruelty of falling short by such a thin, single digit. But for a person so used to controlling what happens on a football field, in a way that he could control nothing else in his life, falling eight yards short of an all-time record — the only record that still feels connected to a less Playstation-seeming age — has to be Zapruder-level excruciating. 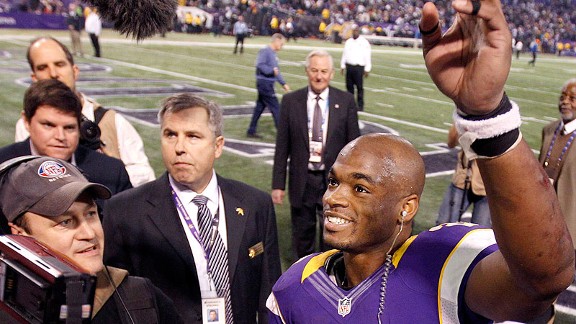 After his historic season — 409 yards in just two games against the Packers, 1,019 yards after contact, 6.0 per carry for the fourth-best per-carry average ever — there is inevitable MVP talk. And this has the potential to bring up bad memories.

When Peterson was 9, his father Nelson coached his Pop Warner team. When little AD dominated a tournament in Texarkana, his team finishing undefeated, all eyes were on him at the award ceremony, and all eyes were shocked to see the tournament MVP awarded to the quarterback of his own team. “I had to explain to him that it’s not always the best player that gets the award,” Nelson remembers. “That awards don’t define who we are.” (The lesson was later relearned when Peterson finished second to Matt Leinart in the 2004 Heisman voting. “And then Cedric Benson won the Doak Walker Award,” Nelson says. “He didn’t even get the award for best running back in the country!”) After the Packers game, AP said “I’m MVP in my heart” while sounding like it was inevitable that his Jimmy Carter heart would be broken by yet another quarterback, this time Peyton Manning.

Still, let it be said that nobody has ever controlled the game by physically dominating his opponents quite like Adrian Peterson. He seems both futuristic and anachronistic simultaneously. He seems wiser now, more careful with the ball, and more trusting, whether it’s of his fullback or his blocking schemes. But he is still just as likely to break it outside, or cut it back in, asserting his own ego on a game that, on every other channel, seems to have evolved beyond the era of the big back and the power sweep.