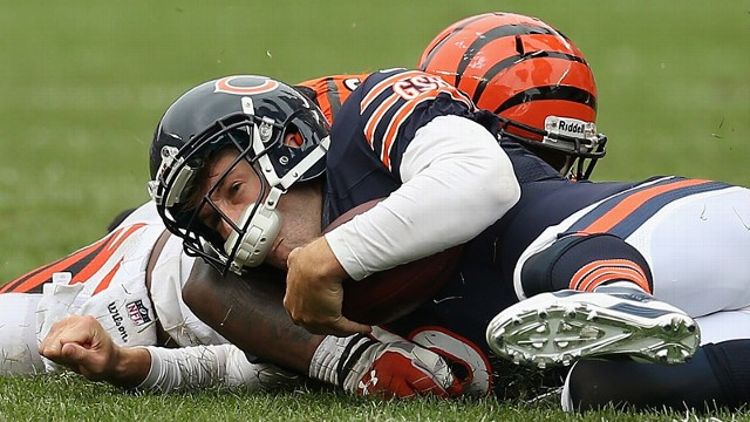 So I get to Ye Rustic just before ten in the morning, and down at the end of the bar there’s this gray-haired guy drinking a whiskey and eating a piece of chocolate cake. You think you were ready for some football on Sunday? You were not as “ready for some football” as this cat. He’s in his fifties, maybe older. Doesn’t seem to have his eyes on any particular game. He’s just going in on this whiskey and cake right quick, hunched over it like he’s taking the SATs. I immediately want him to be my spiritual adviser. He could teach me to be unpredictable, to throw off the competition by ordering dessert in outside-the-box time slots. That gnomic, Walk without rhythm and you won’t attract the worm kind of wisdom. How to be old. Which bars serve cake. That kind of thing. But not long after the games start I look over and he’s disappeared.

About this time last year, after not caring about football for more than three decades, I decided to start following the NFL, and specifically the mighty Bengals of Cincinnati. I chose to root for the Bengals for a few reasons. But mostly I chose them because I’d been assured by people who seemed to know things that they’d lose, often, perhaps even hilariously. That they’d be pretty much stepping on rakes and falling through open manholes out there. I was deeply self-conscious about writing about football, and I figured my decision to hitch a ride on a doomed squad’s coattails would make me a more sympathetic character. We would suck at football together, the Bengals and I. The jokes wrote themselves. I laughed just typing “the mighty Bengals of Cincinnati.”

Instead, after dropping four straight from October through the first week of November, the Bengals started winning. And I started to want them to keep winning. By early December, as I was walking in cold mist in Los Feliz searching in vain for a place to watch what turned out to be a blacked-out game against the Chargers, I had to admit to myself that my bad-faith rooting interest had turned at least halfway sincere. Of course, once that happened, the joke was on me. My ignorance made me a mark. I’d gotten personally invested in the fortunes of a team that hadn’t won a playoff game since the year Kristen Stewart was born. In early January, when the mighty Bengals of Cincinnati fell to Houston in the first round of the playoffs after finishing 10-6 for the year, I was almost relieved.

The Bengals seemed to win as stupidly as they lost, and following them made me irritable, less present in my day-to-day life, more prone than usual to bouts of bleakness and unreasonability. I didn’t like what football brought out in me, even if most of it was only circumstantially football-related. Once the season was over I started making some changes. Tried to start a human life. I got a driver’s license. Leased a car. Stopped drinking so much. Played a bunch of bad par-3 golf. Started meditating and learned some things about myself. Turns out I have a consciousness that screams for distraction at all times and if I sit still on the floor for more than four minutes my spine starts screaming at me to check my Twitter mentions.

Was I working on myself to fill the space in my life left by the absence of football? Did I choose to suffer alongside the mighty Bengals of Cincinnati in order to learn what that suffering has to teach me? I don’t know. But I would be lying if I told you there was never a moment, as I’d sit there, breathing in and out — trying not to tune in to the sound of the leaf blowers outside, saying “Thinking” to myself every time I catch my internal narrative spinning up — that I thought “I guess this’ll be good for the football column.”

I wanted football to start again, though. I needed it to start again. As the season opener drew closer I watched Hard Knocks: Training Camp With the Cincinnati Bengals, put some faces and personalities to the striped helmets I’d spent the coming season tracking. Here was James Harrison, fuckyouitively turning his back to the cameras like Miles Davis about to blow. Here was Taylor Mays showing off his backpack collection and cosplaying Donatello. I listened to a bunch of Bengals fan podcasts, and caught a buzz off their excitement, their guarded optimism, their managed expectations. Sunday morning was like the first day of school. I drove to Ye Rustic with my windows down.

“All you’re going to want to do is drive around,” my friend Guglielmo Marconi told me the day I got my license. “It’ll be great for your life and terrible for your writing.” He wasn’t wrong. I’m 36 and I’ve never driven before. Being mobile is like having a superpower. Now every day I have to make a conscious decision to sit here at the laptop — or stand a few feet from the laptop hitting practice putts into an empty trash can — instead of driving to a national forest or something.

When I think about the summer of 2013 I’ll think about getting in the car with my wife and my daughter in that late-afternoon weekend dead zone, cranking the AC and driving out to Glendale, to the Americana at Brand, a largish open-air mall that’s kind of the Eagleton to the Glendale Galleria’s Pawnee. We listen to “Started From the Bottom” and pretend there’s a force field between the front and back seat that somehow blocks the F-word and the N-word from reaching our 3-year-old’s ears, because something about Drake saying the F-word and the N-word over and over makes us feel invincible as we cruise down the Boulevard of Cars in the sun, to go and spend money joyously, defiantly. The thing about “Started From the Bottom” is that it’s always true. Wherever you started from is the bottom, and you are always here. Drake is so wise for a pharmacist.

I don’t have my daughter with me today, though, so I turn up “Mainstream Ratchet,” a thunderous piece of Wagnerian strip-club music from the new 2 Chainz album. Good lord, this song. It’s a song about asses the way 2001 is a movie about rectangles. It sounds like 2 Chainz is rapping from the cockpit of a Jaeger. It sounds like victory. The Bengals are playing the Bears. There’s usually a deep Bears contingent watching the games at Ye Rustic. They sing “Bear Down, Chicago Bears” every time the Bears score. They sing it loud enough to almost drown out the Raiders fans over by the jukebox at the other end of the bar, who yell Raiiiiiiii-derrrrrrrrs every time the Raiders score or almost score or tackle somebody or two minutes go by.

The Raiders section at Ye Rustic is a mini–Black Hole. The Raiders fans have brought their own Raiders glow-mugs. They have their own special lucky Raiders doormat to step on. I’m told by a source that one of them walked in after stepping in dog crap outside and was chastised by management for wiping it off on the frame of the jukebox, so as to spare the mat. At one point this guy who’s built like the German mechanic from the Nazi airstrip in the first Indiana Jones movie walks in, naked from the waist up except for a few tattoos and a pair of Oakley Blades. We know right away who he’s rooting for. I seriously considered turning heel this season and making this column all about rooting for the Raiders but I worried I’d be killed and eaten before Week 3, because Raiders fans are the Necromongers of football. The Raiders ended up losing that day but I’m not sure they noticed.

As for my game: Ex-Giant and occasional cloud-rapper Martellus Bennett makes his first catch as a Bear and runs in an eight-yard touchdown in the first quarter. The Bears fans wait to sing the song until the touchdown holds up under review. The Bengals tie it up before the end of the first quarter. Andy Dalton can still throw to any receiver on the field, provided that receiver is A.J. Green. Good to know! Commercial break: I will totally watch Showtime’s upcoming documentary Lawrence Taylor Smokes a Great Big Cigar in a Completely Empty Loft Like He’s Waiting for Somebody to Deliver a Couch. I drink Ye Rustic’s terrible coffee and contemplate going the whole season without drinking during a football game. Then I wonder if that’s the kind of thought only an alcoholic has. Somebody in the Raiders corner cries, “Fuck you, Donkey Boy.”

In between bouts of dehydration-induced vomiting so severe he has to be given intravenous fluids at the half, Charles “Peanut” Tillman catches a pass as it bounces out of Green’s hands and runs it back to the Bengals’ 42. CBS’s Phil Simms does a “Simms’ Spotlight” segment on Dalton. The bar has the sound off but based on the graphics package, the intended takeaway seems to be that Dalton has legs, shoulders, and arms, in that order, and that one of his arms will act as the “release point” for the football — probably the right arm. The bar is hot and packed. About the time Matt Forte scores the Bears’ second touchdown of the day I see a waitress open the front door and stick her head out, just to gulp some air.

On the August 28 edition of the Who Dey Podcast, guest cohost “CC” predicted Cincinnati would break in Soldier Field for the Bears by humiliating them 34-10. (“Fuck the Bears,” he explained.) The Bengals are up 21-10 in the third quarter and I’m starting to think he was right. Thinking. Inevitably it all goes wrong. Marvin Lewis gets that FIRE IN OXYGEN GARDEN look in his eye and starts burning timeouts. I learned about the concept of “clock management” over the summer. It’s a thing Lewis is terrible at.

Vontaze Burfict intercepts a Jay Cutler pass and Kyle Adams intercepts Burfict with a low tackle. “How’s that knee?” gloats a Bears fan on the stool next to me. Burfict is still on the deck at the commercial break. I’m fearing the worst. I’m fearing what this year’s story will be if it starts with this column’s favorite Bengal/shirt-ghost brought low. I’m trying to breathe through the moment. Bad stuff in, compassion out. Stay with the hurt. Burfict leaves the field, comes back, makes the tackle on the next play, goes down on that knee again a little later tackling Cutler and has to be helped off the field again, and if it didn’t feel like the end before it feels like that now. And then he’s back. The Bears win 24-21, but Burfict plays the rest of the game. I seriously consider ordering cake.