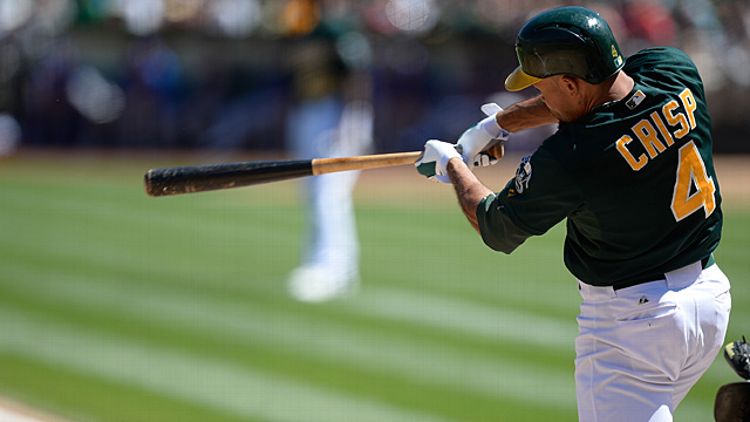 In 2011 and 2012, Coco Crisp did something very odd: Despite turning 32 and 33 in those years (his birthday is in November), he stole more bases in those two seasons than during any other two-year stretch of his career. Crisp would be the first to tell you that he’s much slower in his 30s than he was in his 20s. But years of honing his base-stealing technique made him into a master of the craft, someone who ranked among the league leaders in steals, while rarely getting caught.

Crisp turns 34 this year, and he is stealing bases at a slower rate. Yet in his 12th big league season, he’s again doing something he’s never done before. He’s bashing more home runs, and the first-place A’s are flourishing as a result.

In 114 games this season, Crisp has already swatted 18 home runs, a career high. Eight of those shots have come in his past 17 games. Many of those have been well-timed too. On September 2, Crisp smacked a two-run shot that broke a 2-2 tie and paced a 4-2 win over Texas. On August 31, he went yard off Alex Cobb, giving the A’s their second run in a 2-1 win against the Rays. On August 24, he cranked a game-winning, ninth-inning homer against the Orioles, fueling a 2-1 victory. An individual player’s home runs certainly don’t have perfect predictive power. For one thing, any time any player goes deep, that improves a team’s chances of winning. For another, all kinds of other events determine the outcome of a game. But for this season at least, Oakland’s benefited from happy coincidences. In the 18 games in which Crisp has hit a home run in 2013, the A’s are 14-4.

There’s no surefire way to predict how the A’s will fare in future games in which Crisp homers, beyond accounting for however many runs those home runs produce. What we can do is scrutinize the times Crisp has cleared the wall, to see if something abnormal or fluky might be causing the power surge.

According to ESPN Home Tracker — a tool used by ESPN Stats & Info and created by Hit Tracker founder Greg Rybarczyk — Crisp isn’t exactly hitting moon shots. He averaged 385.6 feet on his 51 home runs hit between 2006 (the first year Hit Tracker began tracking home run distance) through 2012. This season, despite his career-high 18 homers, he’s been hitting balls out with less distance, averaging a more modest 367.5 feet. Dating back to 2006, the average distance for home runs among all players has been 30 feet farther, at 397.6. Of the 63 players with 18 or more home runs this season, Crisp’s average distance ranks 63rd.

For instance, here’s Crisp hitting a homer comfortably over the right-field wall in Detroit, but also close enough to the foul pole that the ball isn’t exactly hit a mile.

The data set for Crisp’s 2013 ranking is a bit skewed here, since players with 18 homers are being grouped with others who’ve hit 30-plus; it’s a safe bet that sluggers like Chris Davis and Miguel Cabrera will hit the ball a lot farther than someone like Crisp. Start back to 2006, though, and the numbers become more jarring. Looking at the players with the shortest average distances during the eight subsequent seasons, we find a 30-homer hitter near the bottom (Jimmy Rollins in 2007) and a 43-homer hitter too (Curtis Granderson in 2012 — thanks Yankee Stadium!). Plus, if we’re comparing Crisp to full-season results, we can prorate his home run total for this year to 20. Even acknowledging those Rollins and Granderson-style outliers, the A’s outfielder still stands out. Of the 747 players with 18-plus shots since ’06, Crisp’s average distance of 367.5 feet ranks dead last, 747th out of 747. (Matt Holliday leads the list, averaging 426.1 feet on his 25 home runs in 2008, which … wow.)

Here’s another shallow Crisp blast, this one landing just a couple of rows up, inside the right-field foul pole.

That one wouldn’t quite qualify as a wall-scraper so much as one that was very well aimed. Indeed, Crisp doesn’t quite rank last in lowest fence-clearing distance despite his last-in-the-league overall home run distance, suggesting that he’s flirted with foul poles multiple times this year. Crisp’s homers have cleared the fence by an average of 17 feet in 2013, ranking 55th out of 63 players with 18 or more homers. The real champ for “cheap shots” is actually Reds outfielder Shin-Soo Choo, who’s averaged just 11.4 feet of clearance on his 20 homers. Choo’s teammate Brandon Phillips comes in second-lowest at 11.6 feet of clearance. The Astros’ Chris Carter has cleared the fence most easily, with an average clearance rate of 33.5 feet for his 27 home runs. It certainly helps to have Houston’s short-porch Crawford Boxes right in Carter’s pull zone.

Still, Crisp has hit his share of balls just barely over fences, in addition to placing them well. Five of his round-trippers cleared the wall by five feet or fewer. His first four wall-scrapers came on April 5, April 7, April 19, and June 21. His fifth, on September 2, was as short a home run as you can possibly manage at O.co Coliseum. In this clip, we see him lift a high fly ball that glances off the bottom of the foul pole, just above the 330 sign on the left-field wall. Call it 330.00001 feet, give or take a few inches.

Unless Crisp has better aim and bat control than any other home run hitter of his generation, we probably shouldn’t expect many more balls to sneak over walls by such narrow margins. Still, just because a player’s doing something anomalous doesn’t mean we can predict when those anomalies will end. Logic suggests that Crisp’s shallow home run streak will end soon, but that’s no sure thing.

We know that Crisp has been successful at pulling pitches, and that the combination of skill and luck may well linger a while longer. It’s certainly not something the A’s can rely on during their push for a second consecutive AL West title, much less in October. But if the streak does continue, it’d be a hell of a nice bonus to have.

#HotSportsTakes: It's Time for RG3 to Step Up and Sit Himself Down