Hug Mansion: The First Round of the 2013 NFL Draft in Commissioner Hugs 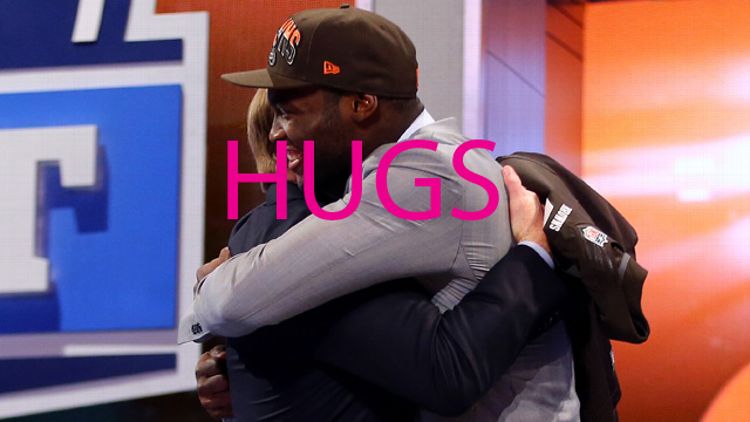 This is the most important evaluation of the draft you will read.

Chris: This doesn’t feel like a no. 1 draft-pick hug to me. I may be a little distracted with the Transformers: Revenge of the Fallen camerawork, but this seems a little low-key. Maybe Goodell was just getting warmed up? Maybe they hugged for like 20 minutes backstage and Goodell told him where Jimmy Hoffa was buried?

Rembert: This is a no. 1 draft-pick hug, when the no. 1 draft pick is an offensive tackle. This hug screams “no one is excited about us hugging.” Or “Hi Mister Goodell, I’m Eric Fisher, thank you so much for downloading the PDFs of my résumé and cover letter that I sent to you via Dropbox.”

Rembert: I think Goodell might be his dad, which explains the handshake skip for the affectionate “Hey, Pops, I did it” embrace.

Chris: Did these guys serve in ’Nam together?

Rembert: It’s even realer than that, Chris. That’s the hug you give a guy who shows up on your doorstep, after thinking he’d died five years earlier. Actually, it’s even deeper than that:

Chris: I detect a bit of weariness on the part of Goodell here. He’s met his day’s quota for bear hugs and just wants a solid, business-casual shake. Greet me like we’re in the lobby of a Residence Inn, Tavon.

Rembert: I think Goodell’s just confused because this guy is smaller than him.

Chris: This is so intense. This is how John McClane hugs Al Powell at the end of Die Hard. Unless you’ve just survived a hostage situation at the Nakatomi Plaza, there’s no reason to hug someone this passionately.

Rembert: It went from a casual handshake to a teen-movie-slow-dance in one second. This is beautiful. This is how all hugs should be.

Chris: Warmack apparently has issues with excessive sweating. That is all.

Rembert: That was Warmack’s first NFL tackle. Which is weird. Because he’s a guard. Maybe he should be a tackle.

Chris: WOW. We have a a winner. Vaccaro takes the Commissioner Hugging Belt on degree of difficult alone. He almost clotheslines A KID ON CRUTCHES. Vaccaro really snatches victory from the jaws of what would have been a career-defining embarrassment.

Rembert: How are you not going to discuss the agility and presence of mind of the kid? Give no credit to Kenny, all praise goes to the kid for avoiding a left hook.

Chris: This is the “you got drafted by Buffalo” of hugs.

Chris: Can’t really concentrate on the hug, because that big-face watch is soaking up all the light in the knowable universe.

Rembert: This is like the draft version of the “Otis” video. Floyd is both Jay and Kanye. Roger is Aziz.