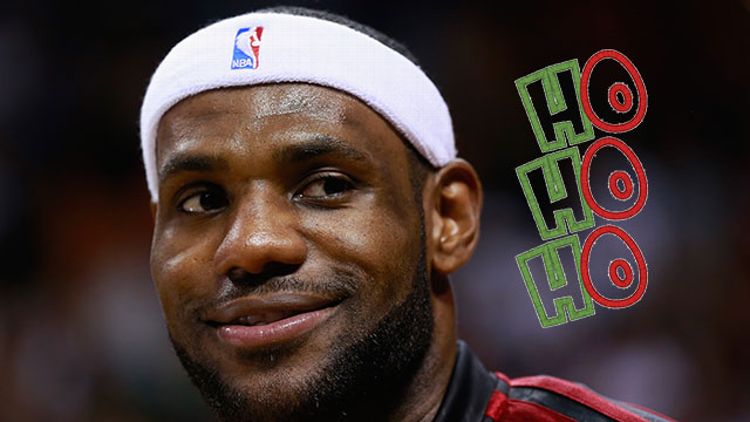 Christmas is a time for many things: awkwardly regressing into your childhood by spending copious amounts of time in your old bedroom while avoiding your family, watching Home Alone, frantically buying last-minute gifts, watching Die Hard, gaining winter weight, fighting with loved ones over traffic routes even though Google Maps tells you you’re right, and the NBA. I am here to help you with that last one.

On Christmas Day, the NBA puts on a quintuple-header of marquee games. This is, unofficially, the league’s yearly coming-out party; it’s when basketball has the conch and everyone sits around and listens. But let’s be honest: Telling your loved ones that you are going to watch 12 hours of basketball on Christmas is a nonstarter. And let’s be even more honest: Watching 12 hours of these particular basketball games could be bad for your mental stability, your physical health, and your brand (especially if your brand is “well-adjusted person”). So be safe, follow this guide, and you might just make it through to the other side.

WAKE UP. Merry Christmas. You have two hours until basketball apocalypse. Hustle yourself downstairs, because it’s time to open presents. Did your parents give you something that feels like the Christmas present version of a subtweet? Did you get a calculator or a Christian Mingle or JDate profile? Take that rage and push it deep down inside! You’re going to need it! You’re about to watch the Bulls!

It’s important to hydrate, carb load, and caffeinate. Seriously, spend some quality time with your loved ones, exchange gifts and warm embraces, clean up the wrapping paper, and have a wonderful breakfast. Then chase it all down with some Lakers-approved BULLETPROOF COFFEE AND GET YOUR GAME FACE ON.

Do suicide sprints up and down your block because you just drank coffee with butter and cream and you’re going to have heart failure if you don’t burn off some of the fat. Don’t worry, Thibs still loves you.

First game of the day! The old, injured, underperforming Brooklyn Nets host Cormac McCarthy’s Chicago Bulls! D.J. Augustin on Christmas Day? No, you’re not dreaming. Here’s how you play this: Check in with this game for the pageantry of tipoff, watch some hardcore Blatche-on-Boozer action for a few minutes, mute the game, and leave the room. Circulate. What’s going on in the kitchen? Does anyone need any help? Dad, how’s that book on World War II? No, the other book on World War II. Talk to your sister’s boyfriend about EDM. Be social. Keep an eye on the score of the game, and more specifically the level of animosity between Kevin Garnett and Joakim Noah.

BAAAAAAAAAAARGGGGGGGGGS. Make sure you are wearing all black for the Knicks-Thunder clash, because this is going to be Andrea Bargnani’s funeral. You may feel the need to get up, to walk around, to talk to your family. Resist that urge. No matter how bad the basketball is, sit there and watch. If you have a son, LET THE BOY WATCH. Kevin Durant is about to kill a man. He’s averaging 28.2 points per game in December, he’s on national television, and he is going to see Bargs on defense. He could go for 60. Watch this. Besides, you’re going to have plenty of time to do other things this afternoon.

Look up in the sky, see J.R. Smith fly over your head in a sleigh pulled by reindeer. Marvel at the universe.

Watch the first five minutes of Lakers-Heat. After that, the score will likely be 54-10. Go help your mother with dinner. Nobody should have to watch this. Midway through this contest, Erik Spoelstra is going to be running Norris Cole, Birdman, Rashard Lewis, Pitbull, and Glen Frey out there.

Dinner. Get after it. Ignore the sounds of exploding metal and Dyan Cannon screaming. If you happen to make a pass by the television and see Kendall Marshall playing basketball, do not be alarmed. Remember your training.

It’s time for some serious Texas basketball, with some serious Texas basketball players. And Dwight Howard. The Rockets and the Spurs, the top two teams in the Southwest Division, clash, with names like Lin, Leonard, Howard, Harden, Duncan, and Ginobili on display. This is the first “good” game of the day. Patrick Beverley is out with a broken hand, Kawhi Leonard is coming of a “dental procedure,” and Tony Parker is still nursing his bad shin, so we don’t really know how much we’ll see of those guys. Mind you, Pop could very well start Patty Mills, Jeff Ayres, Aron Baynes, Matt Bonner, and Cory Joseph. But even if he did, would you be shocked if the Spurs won?

We end our day the way Christmas usually ends: contentiously. Warriors vs. Clippers is the best game of the day, and one of the most interesting new rivalries in the league. Remember back in November when these two played a 126-115 street fight that the Clips won on the back of a 42-point Chris Paul performance? It was the same game where Andrew Bogut and DeAndre Jordan got into a shoving contest and Blake Griffin got into it with Warriors coach Mark Jackson. Now we get a rematch. Everyone has gone to bed. Only true heroes stay up for the last game on Christmas. Do you have what it takes? It’s time to fashion that ugly sweater into a headband and get into the jungle of basketball for real. After the day you’ve had, you deserve it.