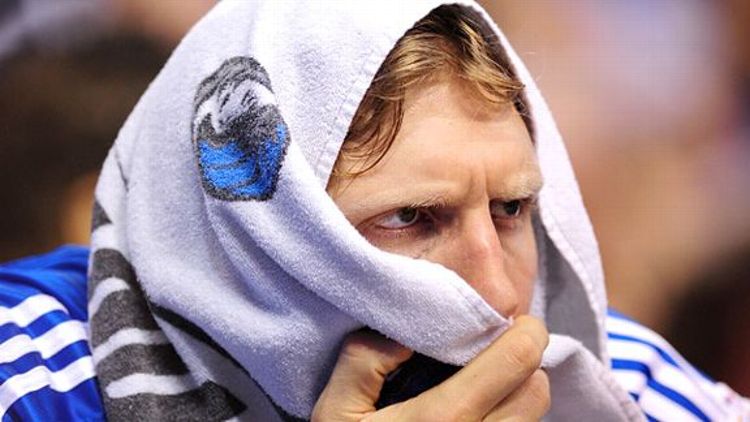 The NBA lockout lasted from July 1 to November 26 . We lost a lot during that time. Namely months of wildly speculative, anonymously sourced, economically illiterate trade and free agent rumors, which have come back with the vengeance of Old Boy in this compressed offseason. Something else got lost too. The Dallas Mavericks lost the chance to be champions.

When you look back on it, we celebrated the Mavs in much the same way Dirk Nowitzki did. He famously strode off the AmericanAirlines Arena court, overcome with emotion, finally arriving at a moment that took years to reach. But he enjoyed it, largely, in private. The same was true for the way the larger NBA community tipped their cap to the Mavs. Fleeting, largely internalized. And then, seemingly moments after they raised the Larry O’Brien Trophy, it was over and the cruel summer and nuclear winter were upon us.

The best thing about the NBA playoffs, especially for the special breed of hoops addict that takes the 40 games in 40 nights slogan as a binding agreement rather than a piece of advertising, is that every team becomes your home team. You watch the same group of players, night after night, through series after series and you develop a relationship with them, the same you do for the team you regularly cheer for. It could be one filled with loathing, schadenfreude or surprising affection, but it’s a relationship just the same.

For a lot of people outside of Dallas, I’m sure rooting for the Mavs had a sort of juvenile/somewhat understandable ABTH (Anyone But The Heat) rationale. I get that. But I actually came to really like that team. They had a sort of Dirty Dozen quality; every guy had a role (Kidd was the brains, Tyson Chandler was the brawn, Dirk was the explosives expert, JET was the wild card and DeShawn Stevenson was the even wilder card). And now, sadly, it seems like their reign as champions will be as short as their celebration.

It should come as no surprise that a Mavericks team that was built to win in the present tense was not going to stay together for the foreseeable future. But it still sucks to see the NBA champions forced to rebuild before they even get their rings.

Rumors are flying that Caron Butler (absent during the playoff run but key during the regular season) is being courted by the Clippers and Spurs. Tyson Chandler, who was perhaps second only to Dirk in his importance to the team down the stretch, is seen as an essential component of both the Warriors and Clippers pursuit of Chris Paul; and even if the Paul-stakes are just smoke signals, Chandler will get paid somewhere. Even if, as our resident NBA tarot card reader Bill Simmons suggests, that somewhere is Dallas, it will just make it harder for the Mavericks to resign J.J. Barea and probably mean the end of the Brendan Haywood era in Big D.

Nobody understands economic realities better than Mark Cuban. Hell, the guy spent the entire offseason trying to solve the United States’ financial crisis. He and Donnie Nelson knew what they were doing, making the trades and signings they did. This team was assembled to win now and it accomplished exactly that.

But there’s something bittersweet about that. At least in terms of their impact on the greater sporting consciousness, the final images of Dallas’ championship victory dissolved into scenes of hotel lobbies filled with journalists covering the comings and goings of player reps, league brass and lawyers, seemingly in an instant. And when we returned to regularly scheduled programming, we weren’t talking about Dirk, DeShawn, JET and Kidd. We were talking about Paul, Howard, Williams and cap space.

They will get their rings, but they still missed out on a rite of passage for any championship-winning team—they lost their victory lap.