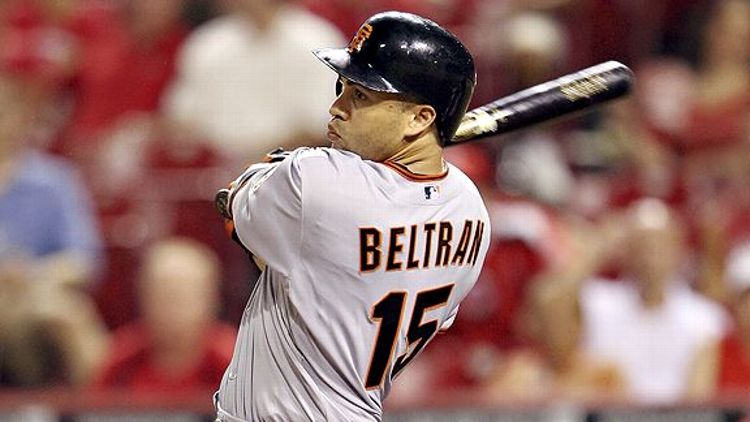 In baseball’s busiest day since the end of the winter meetings, one team might have landed the biggest bargain of the offseason, another might have overpaid and still come out happy with the outcome, and one of our favorite athletes trolled the hell out of tens of thousands of people.

The day’s biggest winners were the St. Louis Cardinals. In signing Carlos Beltran to a two-year, $26 million deal, the Cards addressed one of their biggest needs and did so at an amazingly reasonable price.

One of the biggest biases we can have as sports fans and observers is our rush to stick a fork in players who are past their prime. Certainly, prudence can be a valuable trait. You don’t necessarily want your favorite team, say, giving $51 million to your 36-year-old shortstop just because he’s done many great things for you in the past. But sometimes, we go too far in our reticence. Beltran at the height of his powers was one of the five best players in the game. He’s not that superstar player anymore.

He’s still damn good. Because of baseball’s declining offensive numbers, Beltran’s .300/.385/.525 line in 2011 was actually the best of his career going by stats such as OPS+ and wRC+ which compare a player’s production to league averages. Once an excellent defensive center fielder, he’s now below average as a corner outfielder. Once a ruthlessly effective basestealer and a swift baserunner, his legs don’t offer much value anymore. But the guy can still mash.

The bigger concern is his health. Beltran missed a combined 179 games over the 2009 and 2010 seasons. He missed just 20 last season, but still dealt with pain stemming from his surgically-repaired right knee. It’s entirely possible — even probable — that he’ll miss a bunch more games over the next two seasons.

That’s the beauty of this deal. By committing just two years to Beltran, the Cardinals wipe out a lot of the risk that a longer contract would have proffered. As for the $26 million the Cards are paying, the going rate for buying 1 Win Above Replacement Level on the open market remains around $5 million. Figuring a natural attrition rate of about half a win per year for a player past his prime, Beltran would need to be worth about 3 WAR in 2012 (and 2.5 WAR in 2013) to earn out, very roughly speaking. That’s a very manageable goal. Despite missing those 20 games in 2011, he was still worth an impressive 4.7 wins to the two teams who signed his checks last season.

The Cardinals may have lost Albert Pujols and Tony La Russa. But the team’s pitching strength and depth, combined with a still-solid lineup, already made them a solid contender to win the NL Central in 2012. Their chances just got significantly better.

Meanwhile, the Nationals made a big move of their own with an eye toward contention, trading four prospects for erstwhile A’s lefty Gio Gonzalez. I have four thoughts on this trade:

As he always does, Keith Law deftly breaks down the value of the prospects changing hands. In his analysis, Law notes that the A’s got plenty of quality, with right-hander A.J. Cole a potential star in the making. They also got tons of quantity, with Mickey Tettleton-starter kit catcher Derek Norris, potential impact reliever Brad Peacock and useful left-hander Tom Milone all a good bet to provide at least some value at the major league level.

Unfortunately, these players could be years away from making significant contributions, especially Cole, who’s still figuring out Class-A ball. In trading Gonzalez and Trevor Cahill, the A’s didn’t dump two declining veterans. They dealt a 26-year-old lefty and a 23-year-old righty who could conceivably improve over the next couple years from their already solid performance levels. Oakland’s been a bad, dull team for the past half-decade, and might remain that way for another five years. The Angels and Rangers have built very good teams, and both clubs have the financial means to remain AL West powers for years to come, making a rebuild in Oakland a reasonable strategy. That doesn’t change the fact that this team won’t be any fun to watch for at least a couple more years. Or that it’s tough to be hopeful when even the kids are getting shipped out of town.

In return for that prospect bounty, the Nats got a useful, but flawed pitcher. Gonzalez has always had tantalizing raw stuff, combining a low-90s fastball with an excellent curve that can leave scouts drooling and hitters with buckled knees. That stuff has translated into high strikeout rates, with Gonzalez fanning 8.6 batters per 9 innings in his three-plus years in the big leagues. Problem is, Gonzalez often doesn’t know where his pitches are going. His 91 walks led the league in 2011 and his career walk rate of about one every other inning isn’t what you’d expect from a top starter. Moreover, Gonzalez’s iffy command has led to some fat pitches; luckily, his pitcher-friendly home park suppresses hits with its copious foul territory, and also requires a rocket launcher to hit a ball out. Thus we get sparkling ERAs (3.23 in 2010, 3.12 in 2011) that might be a half-run or more lower than his true ability would suggest.

But just as we can’t write off Beltran as a non-factor because he’s getting older, we can’t completely discount Gonzalez as a good mid-rotation starter. Gonzalez has delivered 6.7 wins’ worth of value over the past two seasons. He’s just 26 years old, is just now coming up on arbitration, and is under team control through 2015. Those traits all carry real value for a Nationals team that’s starting to assemble an intriguing core of talent. The rotation now goes three deep with pitchers projected to be better than average, with Stephen Strasburg a potential star and Jordan Zimmermann, one of the most underrated young players in the game, both slotting ahead of Gonzalez. The lineup’s got some good pieces, with Ryan Zimmerman an elite player when healthy, Mike Morse coming off a breakout season, Danny Espinosa and Wilson Ramos already above average at up-the-middle spots with the potential to improve, and Jayson Werth a reasonable bet to rebound after a disappointing 2011. The farm system remains loaded with top-tier talent, with Bryce Harper perhaps the best prospect on the planet and Anthony Rendon another potential star. The seeds are there for a winning team, if not in 2012, then not much later.

There’s an additional benefit to trading for Gonzalez, rather than chucking $60-$80 million at a free agent like Mark Buehrle or C.J. Wilson: The Nationals could conceivably make a run at Prince Fielder. Though they didn’t top my rankings of teams that should sign Fielder, that’s a very different discussion than will they sign Fielder. They very well might.

The Nats ran out a small payroll of just $68.3 million last season, even accounting for Werth’s puzzling megadeal. They’re controlled by one of the richest ownership groups in the game, led by the Lerner family. The major league roster is assembling some real talent, the farm system could spit out some killer players very soon, and the list of potential Fielder suitors seems to dwindle by the day, creating the possibility of an asking price that could be significantly lower than Fielder and his agent Scott Boras may have initially hoped. You’ve now got a number-three starter projected to make about $4 million next season, instead of the $14 million-plus Buehrle or Wilson would have commanded. Assuming a Fielder signing won’t actually require a 10-year commitment … why the hell not go for it?

Well, there may be one reason: Seattle already has Prince sewn up. Or at least that’s what Logan Morrison’s well-connected sources told him …

… about the purple-bloused cat with the sick jumper.

Seriously, we love you LoMo, but please don’t give us any more heart attacks. Hot Stove season has already made us loopy and starved for real news. Conflating Prince Fielder with the creator of Purple Rain nearly drove us over the edge.

Fifty-eight days ’til pitchers and catchers.

Counting Pennies and Clipping Coupons in the Bronx
Will Yu Darvish End The AL East’s Grip On The Wild Card?
Who Do ‘Yu’ Think Your Are?