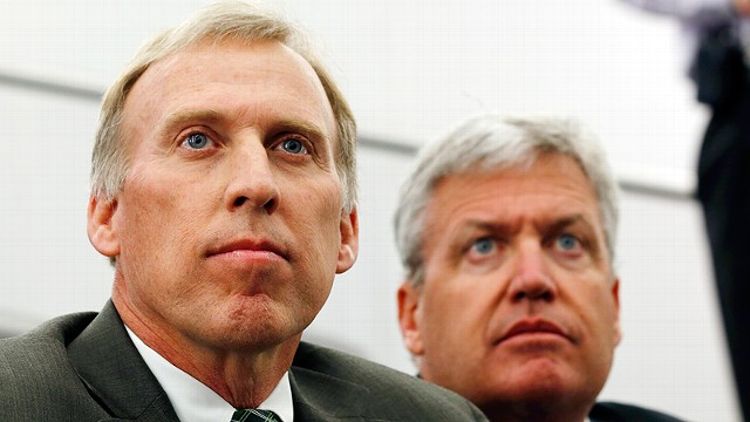 With the NFL offseason trudging along, there are plenty of questions for every NFL team. But for most, there’s one issue that trumps the rest. This is the latest in a team-by-team look at the offseason tasks that just can’t get botched.

The Mike Tannenbaum era for the New York Jets will, justly, be remembered for two things. The first is the freewheeling 2008 offseason that saw the Jets bring in a massive free-agent class designed to retool a team that went 4-12 a season earlier. Before ascending to his role as general manager, Tannenbaum had earned a reputation as a cap master, and the complications that come with several huge veteran contracts seemed to be ones he was leaving to Future Mike. Well, putting his franchise against the cap with a bunch of misplaced free-agency money was enough to ensure that we never actually got to Future Mike, and instead, it was new GM John Idzik who inherited a roster more than $20 million over the limit.

The second is actually the more telling, and also what’s made the past 24 hours a sign of a new start in New York. In the 2009 draft, the Jets picked three times. Their first selection was the fifth overall, a pick they’d gotten by trading first- and second-round picks to Cleveland in an effort to secure USC quarterback Mark Sanchez. That Sanchez hasn’t worked out — and that the Jets compounded that problem by giving him heaps of guaranteed money anyway — matters, but it isn’t the point here. Now with no picks left in the top 75, the Jets sent third- and fourth-round choices to Detroit in exchange for the first pick in the third round. That pick was Shonn Greene. Finally, the Jets picked in the sixth round, where they took Nebraska guard Matt Slauson — the best player of the three, and also one who was allowed to leave town this offseason to sign for close to the minimum in Chicago.

Names like Calvin Pace and Bart Scott are the ones (aside from Sanchez’s) that will follow Tannenbaum around the rest of his career, but the Jets’ draft strategy had just as much to do with their eventual downfall. A few big veteran contracts are less devastating when coupled with a roster full of solid starters accumulated in the middle rounds. The Jets never had that chance — mostly because they never actually picked in the middle rounds. New York’s third-round pick dealt in the trade for Greene was actually one they’d gotten from New Orleans in a trade for Jonathan Vilma. Their original pick in that third round was sent to Green Bay for Brett Favre. In 2007, Tannenbaum gave Carolina a first and a second in order to move up and take Darrelle Revis. He followed that by sending second- and third-round picks to Green Bay to move up in the second round and take David Harris. A year later, the Jets gave up second- and fourth-round picks to move back into the first and take Dustin Keller. Braylon Edwards cost a third and a fifth in 2010, and Antonio Cromartie left them without a second-round pick the year after that.

Filling Out the Saints’ New 3-4 Defense

In total, Tannenbaum made just 16 picks in the first four rounds from 2007 to 2012. Even if he’d hit on all of them (spoiler: He didn’t), it’s a strategy that almost guarantees to leave a roster without depth and financial flexibility. Shocking, then, that Idzik finds himself with neither. Even before acquiring the 13th overall pick in yesterday’s trade for Revis, Idzik made it known that he’s interested in moving down in the first round. It’s a strategy that comes with mixed opinions and mixed results (see Patriots, New England), but if there’s a recent draft where it makes sense, it’s this one. The first few rounds of this year’s draft are considered extremely deep, with no clear talent tiers, even among the first 30 or so picks.

Moving down also makes sense when you consider just how many needs the Jets have to fill. If Idzik is content with keeping the ninth and 13th overall picks, it’s likely that there will be players the Jets could use. Tavon Austin, who’s being discussed more and more as a likely top-10 pick, would be an option at no. 9 for a team desperately in need of difference makers on offense, and with the top tier of edge defenders likely gone, Barkevious Mingo (with whom the Jets are reportedly “smitten”) could also be an option. Pass-catcher and pass-rusher are just two of the many holes on the Jets’ roster, though, and that’s why moving down and grabbing an extra pick or two in the second round might be prudent. Former Steeler Willie Colon will replace Brandon Moore if the Jets choose not to re-sign him, but that still leaves a hole at guard left by the departed Slauson. Dawan Landry will fill one safety spot, but they could use another. An upgrade at right tackle is probably needed, and a player like D.J. Fluker later in the first round might be the right way to go.

One draft won’t solve everything, but if the Jets were going to start over, they’ve gone about it the right way. So far, this offseason has been filled with some low-risk, stopgap signings (Antonio Garay, Antwan Barnes) and some that might actually turn out big (Mike Goodson). It may not have the names, but this is a draft where the Jets can have a chance to add some young defensive talent next to players like Muhammad Wilkerson and build a foundation the way it’s supposed to be built.

About Last Night: Chris Paul's Flair for the Dramatic