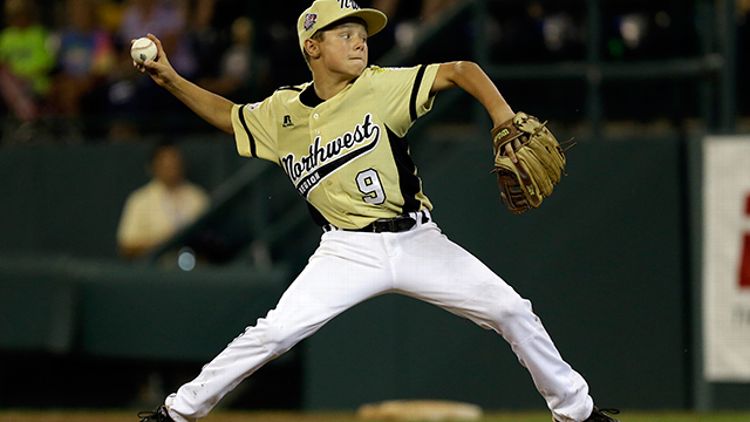 A fact about me: There are two levels of baseball I enjoy watching on television.

1. The major leagues — No-brainer. The best players in the world, the most intense competition, the highest stakes.

Every year, in late August, there’s a moment when I have to come to terms with the fact that I’m religiously watching a group of 11- to 13-year-olds compete in a championship that has little significance beyond itself. Oh, there are justifications. For one, I feel like ESPN has given me permission to enjoy the whole spectacle, since the fact it’s televising it in the first place means it’s become a cultural phenomenon of sorts, AND, at least theoretically, there are other people my age out there watching at the same time.

But then, in an uncomfortable moment of reckoning, I think, Why Little League, Shane? Why don’t I have much interest in watching minor league or college baseball (unless a North Carolina team is involved) or the “senior league” high school–age baseball you sometimes see on ESPN2? Going further, I’m positive that if some network attempted to televise an 8- to 10-year-old Little League or T-ball championship, it would feel pointless from a skill standpoint and horribly exploitative on an ethical level. I already feel weird enough watching this age level, thank you very much.

Which leaves us with the unresolved appeal of Little League, my guilty pleasure. What follows is both rationalization and persuasion; why it makes sense for me to love this thing, and why you should be watching too.

These Kids Are Scary Good

This, I think, has changed a little bit since I was a kid, and completely for the better. Back then, there were a few things you’d see with regularity: fielding errors, terrifying giants striking out 15 to 18 batters with mid-70s fastballs, and lots and lots of tears. It was all stuff you’d expect from a group of kids facing the most intense pressure of their young lives.

Now? The quality of play is incredible. Kids are playing more games and seeing tougher competition throughout the season, and suddenly the LLWS isn’t a giant nerve-fest anymore. The kids are totally unafraid. Like, Children of the Corn unafraid. Why aren’t they screwing up like normal kids?? Are they murderous little robots infiltrating our homes through baseball? It’s terrifying. You’re way more likely to see a spectacular diving catch than even a minor error, and also …

It’s not enough for a player to throw a 75 mph fastball anymore. These kids have seen it, they’re not scared, and they can unleash their quick, compact swings and launch it over the 225-foot fence. Now, a pitcher needs movement on the fastball, and a good curve, and maybe even a changeup. Little League baseball has gone the way of tennis; 20 years ago, everybody thought the serves would keep speeding up, and eventually there’d be no nuance to the sport. Instead, a quicker, more responsive player developed, and now it’s almost impossible for a serve-and-volley thug to win a major even on a hard surface. (Keep reading for this year’s best David-beats-Goliath moment.)

On the offensive side, though? The juggernauts still rule, as 6-foot, 206-pound 13-year-old Kotaro Kiyomiya showed last year:

The Umpires Are Hilarious and Infuriating

First: For whatever reason, Little League umpires tend to be total eccentrics. I don’t know why, but it happens year after year. For a quick example, check out this guy’s delightful strikeout call:

Second: Like everyone else, I find myself becoming irrationally angry at MLB umpires, but holy shit, guys, if the Little League umps were in the big leagues? There’d be a revolt worse than you saw with the replacement refs in the NFL last year. Managers in Little League are allowed to challenge calls on the basepaths, but that doesn’t solve the real issue, which is that the strike zone tends to be about 10 feet wide. There’s a weird philosophy that umpires should err on the side of a loose zone with Little Leaguers, and while that may make sense in a normal town game where walk after walk threatens to drag the game out for hours, it’s crazy in Williamsport, where the best pitchers have pinpoint accuracy. It speeds the game along, but you also end up with batters looking back to their bench, mystified, wondering how they could have possibly hit the pitch that just struck them out.

I can’t back this up with hard data, but I also think Little League umps might actually top MLB umps in terms of sheer self-importance.

The Coach Who Can’t Hide His Asshole Nature

Anyone who has ever played a sport as a kid has run across a real dick of a coach; it’s practically a rite of passage. In Williamsport, though, the cameras are constantly on them, and the coaches wear microphones so we can hear everything they say during the mound conferences. As you might imagine, this produces a lot of phony inspirational talk and heightened self-awareness. But then, just when you think TV has camera-proofed the Jack Reillys of the world, they emerge like worms after the rain, ignoring the emotional complexities of children dealing with a harsh spotlight, and just letting their jerk flag fly. Always fascinating.

Here’s the Zapruder film of Little League baseball, of a coach slapping his player’s head from 2011:

As my editor Mike Philbrick pointed out, most of these people have probably spent about two years worth of college tuition carting their kids around the country from travel team ball to regionals to super-regionals to Williamsport. When the cameras show a crowd shot, I’d estimate that one of every two parents has a sort of euphoric, lunatic look on their faces. They have so much invested that they have to believe their kids are going to win the title, or else all that money … NO. BAD THOUGHTS MUST BE ELIMINATED! DON’T MAKE DADDY’S SACRIFICE BE IN VAIN, SLUGGER! WE LOVE YOU NO MATTER WHAT! HIT THE BALL FAR OR MY BELIEF SYSTEM MIGHT COLLAPSE! WE LOVE YOU UNCONDITIONALLY! GODDAMNIT, THOUGH, DON’T CLOSE YOUR EYES WHEN YOU SWING, YOU UNGRATEFUL LITTLE BASTARD! YOU ARE OUR TREASURE! WHAT DID WE SAY ABOUT WATCHING STRIKES GO BY, HONEY? COME ON! SON OF A BITCH, ANTHONY! IF YOU DON’T GET A HIT YOU DON’T COME HOME. YOU ARE A MONEY-SUCKING DISAPPOINTMENT! DADDY HATES YOU!

The Sordid History of Cheating

How can you not love a sport embroiled in scandal? Especially when Little League makes all its World Series players wear this patch: 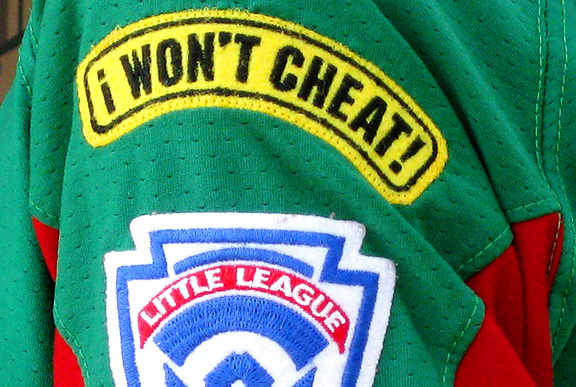 Cheating in Little League baseball has to be the lowest form of all sports cheating, but for a sport that markets itself on purity and down-home values, it happens an awful lot. We all remember Danny Almonte, the wunderkind from the Bronx who dominated the 2001 World Series, and who turned out to be 15 years old.

There are a lot of isolated incidents like that one, but there’s also, believe it or not, institutional cheating. A Filipino team from Zamboanga City was stripped of the 1992 title for fielding several 15-year-old players. Teams from the Dominican Republic, the Far East region, and everywhere in between have been banned from competition for violating the age restriction rules.

And then there’s Taiwan. Competing under the name “Chinese Taipei” since 1969, the country dominated the LLWS for 25 years, winning 17 titles in that span. And I use the word “country” for a reason, because this is, as far as I know, the only example of nationalized cheating in Little League baseball. In that first season, the Taiwanese government decided that sports could serve as a useful propaganda tool for the small country living in the shadow of China. With that in mind, they picked the best players from the entire country to represent the team in Williamsport.

Little League is founded on teams from local communities, so this was a clear violation of the bylaws; it would be like fielding an All-Star team from the entire state of California. It worked; Taiwan won five titles in six years, and was actually booed in Williamsport in 1974 because so many people suspected it of cheating. It was banned in 1975 along with all other international teams for suspicions of using overage players, and came back the next year better than ever. In that era, it competed with Japan for a spot in the LLWS (now the format is expanded, so both teams can earn a berth), and it was Japan who finally caught Taiwan cheating in 1997. Rather than face the music, Taiwan dropped out until 2004, and, with zero titles in a decade, has presumably been playing by the rules ever since. Which brings up …

The Japan vs. Chinese Taipei Rivalry

This is always, always awesome. These are the two most successful “regions” in LLWS history (Taipei has won 17 titles, Japan eight), and there’s no love lost between the two nations and the Little League organizations specifically; it was Japan, after all, who ended Taiwan’s reign of dominance by catching them red-handed.

They played on Sunday, with Japan taking a typically narrow 3-2 win, but because the LLWS now uses a double-elimination format (occasionally leading to INJUSTICE!), they could meet again, perhaps on Thursday, or perhaps for the International Championship on Sunday. And in case you were wondering, yes, I consider Japan the “good guys” in this case. (Unless its coach slaps a player in the head.)

1. Its fans cheer ALL GAME LONG, without pause. It’s basically an ongoing two-hour song/chant, and I’m pretty sure it’s used to stress out the opposing pitcher.

3. Players nod and say hello to the umpire before every at-bat.

4. Players politely place the ball on the pitching rubber when an inning ends, rather than rolling it out to stop wherever like their careless American counterparts.

Both are usually great, and both win a lot less than they should. The Mexican Little League has won just three titles (’57, ’58, ’97), and this year, yet again, the Tijuana squad finds itself off to a solid 2-1 start after falling to Japan — but if it beats Latin America today, it gets a rematch with Japan in the International Championship game. It’s always fun to put the pressure of a national curse on 12-year-olds and see how it pans out, right?

Chula Vista, California, is my team this year, and it started against Delaware, when they were facing this year’s version of the six-foot, smoke-throwing giant. The first two batters for Chula Vista were small kids with long, blond hair who looked they belonged on a beach, and also looked like they would be overpowered by the pitcher. Instead, Micah Pietila-Wiggs lined a shot over the third baseman’s head, and Jake Espinoza sat on a fastball and drove it over the left-field fence. Watching the two small kids round the bases like it was no big thing? That was a seriously jaw-dropping moment, and I’ve been a California fan ever since. The Delaware pitcher’s body language immediately went to hell, and it became clear that the surfer kids were tougher as they won 15-3. They continued their run to the U.S. title game by dropping Connecticut, 6-3, in nine drama-filled innings.

Those are a few of my reasons for loving the rich sporting tapestry that is the Little League World Series. I’m rooting for a Japan-California dream final, although if Chula Vista met Tijuana for the title, it would pit two teams separated by a mere 13 miles. Either way, the next six days are, somewhat embarrassingly, a few of my favorite sports days of the year, and I encourage you to get on board the shame train and learn to love the Little League World Series.