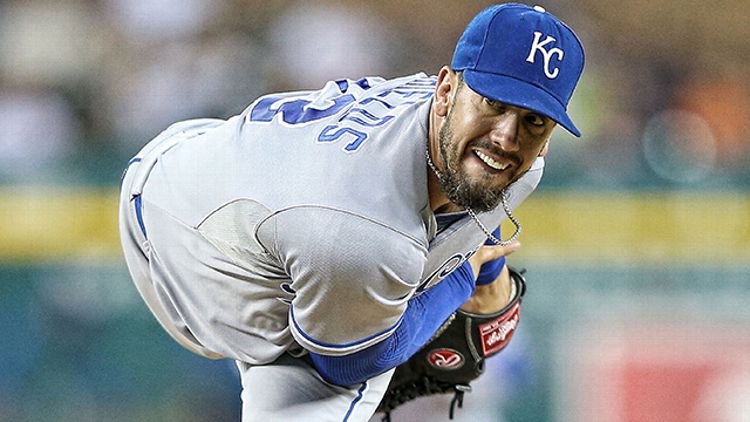 James Shields has been one of the biggest bright spots on an improved Royals team this year. He’s on pace to fire more than 200 innings for the seventh consecutive year, while also ranking among the league leaders in ERA. With an average fastball of 92 mph, he isn’t a flamethrower like Matt Harvey or Stephen Strasburg. But Shields is a master of the subtle arts, changing speeds, mixing pitch types and locations, and escaping some tough jams.

There are few subtler arts for a pitcher than the ability to hold and pick off runners. R.J. Anderson of Baseball Prospectus recently wrote an in-depth piece breaking down the various ways in which pitchers excel at that skill. Those include Braves starting pitcher Julio Teheran’s knee-buckle move, which has triggered a league-leading eight pickoff moves this year (and looks suspiciously like a balk).

Shields doesn’t have anything quite that deceptive in his bag of tricks. But he still leads baseball in pickoffs over the past three seasons with 17, including a staggering 12 in 2011. We talked to Shields about the fickle nature of pickoff totals, and tricks he’s learned to control the running game.

When did you first start getting good at picking runners off?

This goes back to high school; I was already a big believer in pickoffs then. I’d use a variation of moves, pick off guys at first, but also at second or third. My middle brother was a lefty and he always picked guys off at first. I wanted to see if I could get good at it as a right-hander.

One thing you seem to do just about every time with a runner on first is an exaggerated dip. What does that move accomplish?

I had an instructor named Dick Bosman who helped me refine what I was doing. I always had quick feet, but he helped me do a better job of identifying runners and leads. In order to identify the situation, you have to be able to judge distance. You can’t identify it with your peripheral vision. All you get from there is the ability to see movement. The dip allows you to gather information, since you’re looking at the runner with both eyes. With both eyes, you can judge distance. So when you do come set, you know how far the runner is off first. Once you have that information, it’s much easier to know what to do — hold the ball a little longer, throw over, or actually try to pick the runner off.

You’ve developed a reputation over the years as someone who’s willing to teach teammates some tricks if they ask. In Tampa Bay, the word was that you’d talk to some teammates about how you throw your changeup. Holding runners on, picking guys off … are those transferable skills too? Or do you need certain talents to do it, like quick feet?

I’m a big believer that players learn from players, that pitchers learn from other pitchers. It goes both ways. I pick their brains, and vice versa. I’m not just the guy you can get information from. When I was in Tampa, the whole starting staff, every day we talked about scenarios, pitches thrown, everything. I definitely want to learn from other pitchers too. I don’t necessarily think of myself as someone to go to. A lot of it is I just like talking about baseball with other people.

If you like learning from others, then how about this: Who’s got the best pickoff move that you’ve seen?

A lot of guys have quick feet, quick moves. I don’t know if I want to mention specific names. OK, here’s one. Jesse Crain has a great move. I think he’s the fastest in the big leagues as a right-hander. Quick feet, good instincts, great move.

That 2011 was the really crazy one, 12 pickoffs. What happened that year?

Early in my career I had a lot of pickoffs, or at least I became known for having a good pickoff move. [Note: Shields picked off four runners in 124 ⅔ innings during his rookie year.] Guys would get leads off me, I’d pick them off. Then people adjust. There’s video work, scouting work, advance scouts. They get all of this information. Then maybe teams don’t get as big a lead in later years. In 2008 and 2009 I didn’t pick many guys off, but I didn’t give up many steals either. They didn’t get leads in those years, which is fine with me. That tells me I’m doing my job.

In 2011 I just had more opportunities. I picked a few guys off first. But I also got a couple at second, I think one or two at third too. Sometimes that just happens, you end up with more chances.

Working on your pickoff move, holding runners on, using a slide step … there’s an argument to be made that doing all of that takes time and effort that you could be using to focus on mastering your actual pitching. This isn’t the ’80s anymore where you’d have guys who could steal 100 bases in a season — the running game is way down from where it once was. Given all that, why do you work on this so much?

To me, picking runners off, identifying leads, all of that’s a big part of pitching. I treat it as another pitch. If I can pick a guy off or prevent him from stealing, it saves me pitches, keeps him out of scoring position, keeps the double play in order, and helps me get out of innings with no runs allowed. So I’m a big believer in controlling the running game. Maybe it was bigger back then, when they played more small ball, when they ran, bunted, and moved guys over. But for me, it still works to my advantage. It still helps a pitcher out.