Good vs. Evil: Who’s Who In The Sox-Yanks Rivalry? 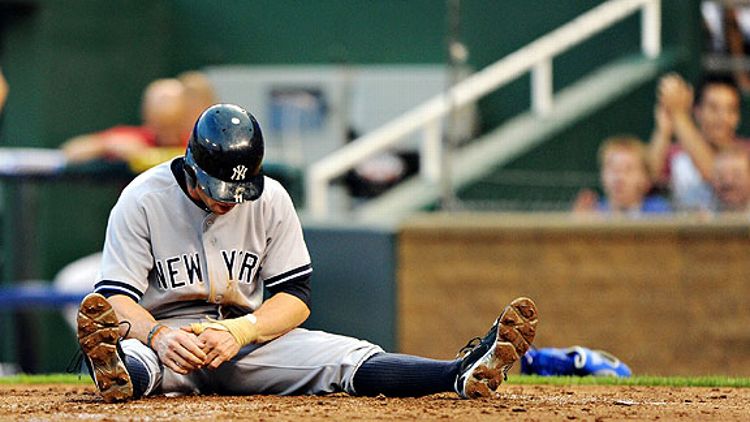 No surprises here: As of this morning, the New York Yankees and the Boston Red Sox have the two best records in the American League. Boston is up a game and a half, and the teams meet for a three-game series at Fenway starting Tuesday night. The standings will only heighten the usual drama, which typically includes four-hour games, disturbing sentiments expressed by drunken fans, and any number of batters exposing their spines to a fastball.

For Boston and New York, shared domination is nothing new. They’re the only two clubs to win more than one World Series title in the new millenium. Playoff berths have almost been a formality — since 2003, there have been eight AL East winners, and eight AL Wild Card winners. The Yankees or Red Sox have occupied 13 of these 16 positions. Tampa Bay spoiled the fun in 2008 and 2010, and Detroit managed to nab a wild card in 2006, but otherwise the duopoly has gone unchallenged.

Put simply, these teams are superpowers. The numbers back it up: the Yanks and Sox are the two most valuable franchises in baseball, they earn the most revenue, and they’re first and third, respectively, in payroll.

And if there’s one truth we know about superpowers, it’s that one must be good, and one must be evil. Anything more nuanced is too ambiguous and uncomfortable to consider. Every yin has a yang. Just look at the two major superpower clashes of the past 100-plus years: U.S.-Germany and U.S.-Soviet Union.

Those are the only two, unless other places in the world have history (seems unlikely — I never hear about them). In every case, there was a clear villain. Hitler. The infuriating Olga Korbut. And there was a clear hero. Brad Pitt. Senator Joseph McCarthy. Sure, some people might say there were geopolitical subtleties that make such sweeping generalizations impossible, but those people have suspicious habits, like recycling plastic and not attending oil spill parties.

The premise stands. But with the Yankees and Red Sox, the roles are less obvious. Both teams play in America. Both teams spend a lot of money to the detriment of “third world” teams. So who’s good? Who’s evil?

Let’s take 10 categories and assign one “evil point” to the loser of each. The first five categories will take a broad look at the cities themselves, and the last five will be baseball-related. When the final numbers are tallied, this great conundrum will be resolved, and we’ll all know who deserves our allegiance.

Boston was a hotbed of patriotic activity during the American Revolution. Paul Revere’s ride, one of the crowning moments of our history, took place in or around Boston somewhere. It was also roughly where someone shot a redcoat in the whites of his eyes. I still get goosebumps when I try to imagine the exact details.

New York was mostly a city of depravity and sin, but now has something called the Freedom Tower. It’s a, pretty phallic, beacon of our national might! Forget cradles of liberty. Cradles are where you place helpless children. New York has an entire obelisk, baby! A patriotic monolith! Someone get Chesney down here — we need a song about this to play at barbecues. CHESNEY?!

Verdict: Revere versus Chesney is too tough to call. Also, the Freedom Tower isn’t finished yet. Half an evil point each to Boston and New York.

Boston, as far as I know, just has dirty water and the Mighty Mighty Bosstones.

Verdict: New York is obviously a musical haven for derelicts. One evil point to NYC.

Boston nicknames: The Cradle of Liberty, the City on a Hill, the Hub, Beantown, the Athens of America.

Boston has the Charles River, which opens its waters to Harvard types who wear paisley argyle cardigans (barely even possible), row glorified canoes, and sing roundelays about getting elected to the Senate.

New York has the Hudson River, which is known for being landed on by all-time badasses like Chesley Sullenberger who think runways are for cowards.

Verdict: I’m so fired up by Sully! One evil point to Boston.

On the good side, New York has people like former Supreme Court chief justice John Jay, fashion designer Ralph Lauren, and Lady Gaga. On the bad side, Son of Sam. I’m not afraid to take a hard, defiant stance on this one, guys: Son of Sam was a real weirdo.

Boston can brag about such luminaries as second president John Adams, his son John Quincy Adams, and famous first lady Abigail Adams. There are probably a lot more once you get past the ‘A’ section in the Wikipedia entry, but that’s just a theory. On the flip side, they have the Boston Strangler.

Verdict: Say what you want about Son of Sam (and believe me, I’ve said plenty), but at least he delivered the mail. The Boston Strangler character was probably unemployed, and thereby ‘strangled’ the American economy. One evil point to Boston.

The Red Sox suffered a long drought between 1918 and 2004 after they traded Babe Ruth and invoked a curse whose existence only an extreme stat-head would deny. Still, they’ve won seven World Series titles.

The Yankees are slightly more prominent, with 27 titles and a whole stable of legends. They also fought valiantly against the devil, but lost, in a tight pennant race.

Verdict: Trading Babe Ruth is its own special kind of anti-American evil. Boston takes the point.

After each home game, the Yankees play Sinatra’s legendary “New York, New York,” a rousing tribute to team and city.

Boston doesn’t have one, as far as I know, but the Yankees are called “the evil empire.”

Verdict: Whether the Yankees are actually an evil empire is irrelevant; perception is everything. One evil point to New York.

Boston’s Ted Williams was a crusty old devil who hit .400 but wouldn’t even wave to his fans. However, he was a pretty awesome fighter pilot, flying 39 combat missions in Korea.

Pretty much everyone who ever played for New York was a drunk and a womanizer, and Babe Ruth once ate second base during a rain delay.

The Vatican is currently in discussions to canonize Derek Jeter. The only problem? Too many miracles.

Here’s how the final tally pans out:

The science has spoken, and the time for subtlety has passed. Root for New York, or root against America. I know which one I’m choosing.