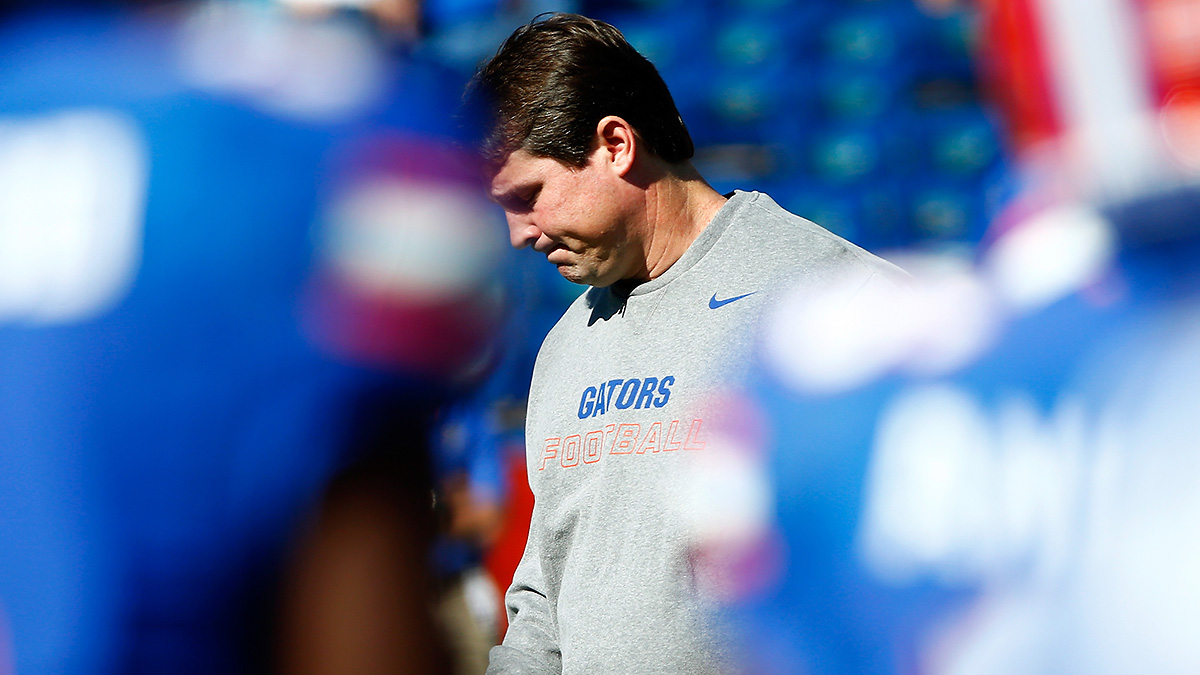 To no one’s surprise, Saturday’s 23-20 loss to South Carolina marked the official end of the Will Muschamp era at Florida, a four-year odyssey that will soon be remembered for nothing in particular. Blessed with enviable talent and resources even by the rapidly escalating standards of the SEC, Muschamp’s teams achieved a record of almost perfect mediocrity, going 27-20 overall and 17-15 in conference play. Say what you will about Muschamp as an entertainingly volatile presence on the sideline: On the field, win or lose, the product was never interesting.

If anything, the Gators’ commitment to mundanity was a kind of spectacle in itself. The prosaic persona was, of course, by design: Although he worked for several high-profile head coaches prior to landing the top job at Florida — most recently as Mack Brown’s defensive coordinator and official successor-in-waiting at Texas — Muschamp’s basic coaching instincts were forged under Nick Saban’s wing at LSU,1 and his M.O. in Gainesville might be best described as a full-scale Sabanization in spirit, if not in results. At best, Muschamp’s Gators took care of the ball on offense, clamped down on defense, and seemed generally content to win with as little scoring as possible. At worst, the pedestrian offense melted down in a flurry of turnovers not even the top-shelf defense could overcome. When the results fell somewhere in between, as they usually did, there was very little to do except compare Muschamp’s outfit with much better Florida teams from the recent past.

The Gators’ best by far under Muschamp came in 2012, when they validated their coach’s close-to-the-vest template with an 11-1 regular season and an at-large Sugar Bowl bid. Offensively, though, even that campaign was a disaster: Florida ranked 12th out of 14 teams in the SEC and 104th nationally in total offense, and failed to top 400 yards in any of its last seven games. But the same offense committed only six turnovers in its 11 wins, which was more than good enough opposite a top-10 defense stocked with future draft picks. Despite a collapse in the bowl game, the Gators finished the season ranked ninth in the final AP poll.

But that success was an aberration, not the norm. In 2011, Muschamp’s first season, Florida finished last in the SEC in turnover margin and won just seven games. In 2013, the Gators won just four games amid an injury epidemic that methodically struck down quarterback Jeff Driskel, his top backup, and five other offensive starters over the course of the season, as well as its best player on defense. Florida averaged fewer yards per game than any other SEC offense last season, failed to exceed 20 points in the course of a seven-game losing streak to close the year, and subsequently sacrificed offensive coordinator Brent Pease, buying Muschamp a temporary reprieve.

The Gators got healthy entering 2014 and replaced Pease with Kurt Roper, who arrived from Duke with an ostensibly up-tempo scheme that promised increased balance. The result: Florida still ranks 12th in the SEC in total offense, having failed to top 100 yards passing in four of them. Driskel, a fourth-year junior, was benched in favor of a true freshman, Treon Harris, after the veteran delivered successive meltdowns against Alabama (9-of-28 passing for 93 yards, 2 INTs), Tennessee (11-of-23 for 59 yards, 3 INTs), LSU (14-of-25, 183 yards, 2 INTs), and Missouri (7-of-19, 50 yards, 2 INTs).

The loss to Mizzou, a rock-bottom, 42-13 humiliation fueled by four non-offensive touchdowns for the Tigers and six Florida turnovers in all, ended with the remnants of the home crowd in the Swamp chanting “Fire Muschamp.” Less than a month later, they got their wish.

Ironically, between the nadir against Missouri and the pink slip over the weekend, Florida turned in the most fully realized offensive performance of Muschamp’s tenure: a 38-20 smackdown of his alma mater, Georgia, in which the Gators ran 60 times for 418 yards with no pretense of “balance” whatsoever. (Harris, making his first career start, was 3-of-6 passing against UGA for 27 yards.) For a single, solitary afternoon, against a despised rival that boasted a 3-0 record in the series in Muschamp’s first three seasons, his ideal vision for the program was a reality. It couldn’t save his job once Florida eliminated itself from the SEC East race against South Carolina, but just the once, he got to coach exactly the game that played out in his head.

So let it be written: As a head coach, Muschamp made for a great defensive coordinator. Florida ranked in the top 10 nationally in total defense in each of his first three seasons, and currently ranks 20th in 2014, with the decline due mainly to an uncharacteristic lapse against Alabama in September. He’s only 43, and he’ll land on his feet as an actual defensive coordinator in short order. We haven’t heard the last of Coach Boom.

Meanwhile, despite reports to the contrary, it seems inevitable that Florida will move forward with a list that includes Mississippi State coach Dan Mullen and [insert candidate here]. Mullen is the dream candidate: As an offensive coordinator, he was an integral part of Florida’s SEC/BCS championship runs in 2006 and 2008 under Urban Meyer and has succeeded in turning a perennial SEC doormat in Starkville into an emerging powerhouse. Not that it’s necessarily going to be Mullen — Michigan will likely be entering the Mullen sweepstakes in a few weeks as well, and it remains to be seen if he’ll even be interested in leaving Mississippi State while quarterback Dak Prescott still has eligibility remaining in 2015, or parting when he’s (presumably) in line for a substantial raise at MSU.

Still, at this point, any preliminary list of candidates that includes names other than Mullen is spitballing for clicks. Florida’s best teams under Meyer in the past decade and Steve Spurrier in the ’90s were always defined by their prolific offenses, and the SEC in general has been dragged kicking and screaming into the up-tempo spread era. There’s very little patience left for slugging it out in battles of attrition, and this time around Florida isn’t in the market for another coach who won’t acknowledge that reality.

Why the Marlins Finally Opened the Vault to Sign Giancarlo Stanton to Baseball’s Longest, Largest Contract