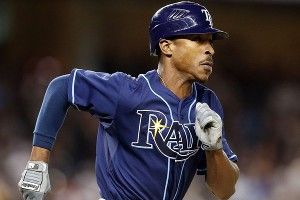 1. Upton’s got age and skills on his side. Several of the biggest-name free agents on this year’s market are on the wrong side of 30. Not Upton, who celebrated his 28th birthday three months ago. He’s had a bit of a weird career, posting the two best seasons of his career (by WAR) in his first two full seasons as a starter, in 2007 and 2008, his age-22 and age-23 seasons. Also odd: He posted the best strikeout and walk rates of his career during the only full season in which he failed to hit double-digit home runs (2008), then did a passable Babe Ruth impression in that year’s playoffs, cranking seven homers in 11 ALDS and ALCS games.

Upton’s been a tantalizing and frustrating player to many because he was a no. 2 overall pick (who should have been no. 1 but for the Pirates’ Bryan Bullington fetish), and because the combination of gliding gracefully to balls in the outfield and occasionally failing to run out ground balls (as if no one else does this) makes him appear to be going at less than full speed. Keith Law has also noted Upton’s erratic results when it comes to missing or failing to square up hittable fastballs in the strike zone. But what should both frustrate and intrigue you most is the combination of skills Upton has flashed at different points of his career. He’s walked 97 times in a season, hit .300, blasted 28 homers, cranked 38 doubles, and hit into just seven double plays — he’s just never done all those things in the same season. If he could somehow combine those abilities while tapping into the speed that’s seen him average nearly 40 steals a year over the past half-decade, he’s an MVP candidate.

2. He’s going to benefit from leaving Tropicana Field. Though parks like Petco and Safeco get a lot more attention for their offense-deadening ways, the Trop has played as one of the most pitcher-friendly stadiums in baseball for years. In a hypothetical universe in which Upton hits every pitch with the same spin, height, and trajectory in Atlanta that he did in St. Pete, he’ll probably put up noticeably better numbers.

3. His contract is the biggest the Braves have ever given a free agent. This deal blew away the four-year, $60 million deal Derek Lowe got in 2009. We’ve written and written about the explosion in TV deals and overall baseball revenue streams, even for poorer teams. But the 25-year TV deal Liberty Media inherited at below-market rates when it bought the team from Turner five years ago means the Braves have become unlikely have-nots in their own right. If Upton were a sure-thing elite player, you spend the $75 million without batting an eyelash, even if you’re not making anywhere near what you’d want to make from your TV contract. But Upton’s eroding plate discipline and inconsistent play mean he’s no slam dunk. On a pure dollars-to-wins basis, you’re really only asking Upton to average 2½ to three wins a season, and Upton’s averaged nearly four wins a year in his six full seasons. The Braves don’t spend these kinds of dollars every day, though. With Liberty Media keeping a lid on payrolls every year, the Braves have to hope Upton does more than meet the bare-minimum standard required to earn his contract.

4. Keep an eye on Upton’s defense now that he’s out of Tampa Bay. The Rays had him play shallow, perhaps shallower than any other center fielder in the game. If the Braves use more traditional positioning, it’ll be interesting to see if that helps or hurts them in the aggregate, given the likely reduced number of extra-base hits over Upton’s head but also probably more singles in front of him. If Upton’s range subsides as he enters his 30s, he might eventually be forced to a corner outfield spot, which could further eat into his value.

5. The market for center fielders should remain hot. The Phillies were reportedly the runners-up in the Upton sweepstakes, and now figure to ante up to secure an alternative, possibly Michael Bourn. Angel Pagan actually produced more than 10 combined wins in the 2010 and 2012 seasons, and in a vacuum could theoretically attract a contract not far from Upton’s. But he’s also three years older, with a history of injuries and a reputation that doesn’t quite match his results. Shane Victorino is still out there after a down year in 2012, too. And that’s not counting marquee free agent Josh Hamilton, who might be best suited to playing left but whose bat would produce more relative value in center. Beyond Philly, there aren’t many teams with a specific, gaping hole in center. The Nationals have been after a center fielder for years now, but Bryce Harper might very well be able to handle the position, too, making him an attractive plan B if Bourn and Pagan want the moon. The Rays lost Upton, but they have Desmond Jennings ready to slide to center.

The defensive revolution that started in earnest with the Rays’ worst-to-first run (and Upton on the roster) in 2008 still has its share of takers. Where the remaining outfield free agents go, and how much they fetch, may very well depend on a few teams’ desire to trot out multiple center fielders, or at least center field-caliber outfielders, at once.