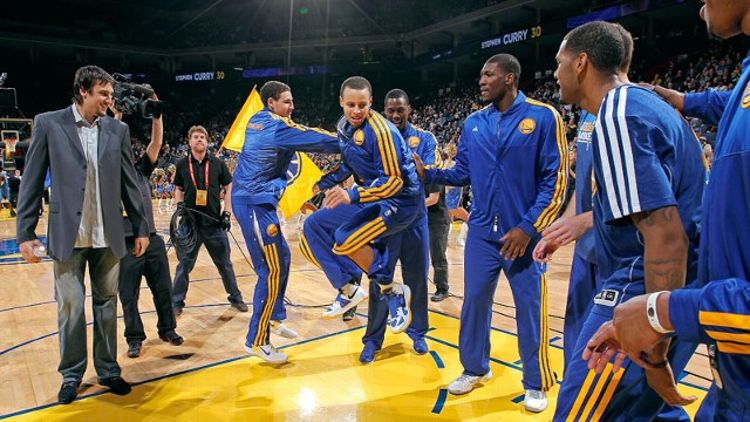 The dividing lines are already starting to blur. Across the league teams are threatening to jump or fall from one tier to the other. But as we’ve yet to approach the one-quarter mark of the season, I’m still conceiving of the Western Conference in four tiers:

Tier No. 1: The five teams that should be better than everyone else: Thunder, Grizzlies, Spurs, Lakers, Clippers. The Clippers have lost four of five and the Lakers are doing whatever it is they do at 7-8, but these five should eventually shake out as the five best teams in the conference.

Tier No. 2: Whatever the hell the Nuggets are. They’re 8-7 against a very difficult and road-heavy schedule, and they have the feel of a team still in the early stages of figuring out what they are. Their defense has been unreliable; Denver is 18th in points allowed per possession, about where they were last season, and George Karl clearly has no faith in the JaVale McGee/Kenneth Faried combination. And despite that justifiable lack of faith, Karl has played around with Faried at center in ultra-small lineups. Wilson Chandler is hurt, Timofey Mozgov is essentially out of the rotation, Jordan Hamilton flows in and out, Danilo Gallinari can’t shoot from range, and last season’s elite offense has turned into a mediocrity that cannot space the floor. But they’re 8-7, it’s early, and this team has talent and smarts.

Tier No. 3: The most interesting race in the league. That would be for the last two playoff spots, assuming the prior six all make it, and it includes Dallas, Minnesota, Golden State, and Utah.

Tier No. 4: Lottery-bound: Houston, Portland, Phoenix, Sacramento, and New Orleans. The Blazers and Suns are hanging around .500, but I have faith in neither long-term. Houston is interesting, and close to earning a vault into Tier No. 3.

That tier hasn’t been as interesting as hoped — not yet, at least. Injuries have robbed us of three top big men in Kevin Love (welcome back!), Andrew Bogut, and Dirk Nowitzki. Dallas’s rotation has changed almost night-to-night, including on Tuesday, when Rick Carlisle started Jae Crowder at small forward and brought Darren Collison off the bench. (Note: If a lesser coach were throwing stuff at the wall like this, he’d get pilloried for inconsistency and driving players batty with uncertainty. Carlisle’s success speaks for itself, and by all accounts he deals with players with an honest toughness that works.) Utah has been all over the place, though they appear to be settling in as a solid offensive team that struggles to defend.

And then there’s Golden State, somehow 8-6 despite a tough-ish schedule, Bogut’s absence, a disastrous season-ending injury to Brandon Rush, and an offense that has fallen off the rails. Scrapping to a winning record amid all that ugliness will matter a ton if this race is tight in April.

The Warriors, improbably, are getting by with a much-improved defense and solid work on the boards. Golden State is no. 2 in defensive rebounding rate after finishing dead stinking last in that category in each of the past four seasons. They’ve managed that despite facing six of the league’s top-10 offensive rebounding teams in their first 14 games, including two against Denver, which is on pace for the highest offensive rebounding rate the league has seen in a decade. They’ve managed it despite playing heavy minutes with both David Lee and Carl Landry on the floor; Landry has been a below-average defensive rebounder his entire career, and Lee’s gaudy individual rebounding numbers mask the fact that his teams have consistently rebounded better with him on the bench.

Golden State is 12th overall in points allowed per possession, up from 27th last season and 26th the year before. The Warriors, an annual mess on defense and one of the very worst rebounding teams ever last season, have turned into a solid defensive club and a very good rebounding bunch — without Andrew Bogut.

What the hell is going on here?

It’s nice to preach effort and passion and hustle, but the real story starts with boring old X’s and O’s. Mark Jackson, at the urging of his staff, decided over the summer to completely revamp Golden State’s basic defensive philosophy, he tells Grantland. The Warriors last season — without a proper training camp — mostly defended opposing pick-and-rolls by having the big man guarding the screener scamper far up above the screen, toward mid-court, to try to cut off the ball handler out there.

It didn’t work. Ball handlers turned the corner easily on Lee, Andris Biedrins, Jeremy Tyler, and the rest of Golden State’s bigs, slicing into the teeth of the defense and bending it until it broke. (Note: The Warriors were also tanking.) Deep penetration draws crisis-level help and creates open opportunities all around the floor — spot-up jumpers, chances at the rim for cutters, and wide lanes through which to pursue offensive rebounds.

Golden State has ditched that strategy. On pick-and-rolls in the middle of the floor, the Warriors now have their point guards try to force opposing ball handlers in a particular direction while the big man on the screener drops down toward the foul line on that side of the screen. The goal is to force the ball handler into a pocket above the foul line — to have the big man (Lee, Landry, whomever) waiting there, walling off the paint, as Stephen Curry or Jarrett Jack chases the opposing point guard from behind. It is the job of Curry and Jack to take away one direction at the start of the pick-and-roll, and to direct the the opposing guard the other way. At times, that means overplaying an opponent’s strong hand. At other times, it means jumping right in front of the screener, blocking the point guard’s path around the pick, and forcing him to dribble away from it.

(Curry’s performance at this specific task is why Jackson labeled him an “elite” defender, a comment that drew mockery among NBA writers. But watch Curry closely from now on: Jackson says he’s quite good at solidifying position early in a pick-and-roll in order to block a point guard’s preferred left-or-right path. Some film study confirms Curry is pretty good at this, though he obviously has to prove it over the season. “People laughed at me,” Jackson says, “but when I watch the film, it puts a stamp of approval on what I said.”)

But those mid-range 2s are better than allowing guys into the paint. “We’ve changed our primary defense,” Jackson says, “but you are not going to take everything away from great players. We understand what the numbers say: The deeper the offense gets into the paint, the less success you’re going to have defensively.”

And the Warriors are contesting at least some of those mid-range looks by having defenders away from the ball sneaking an extra step or two into the paint this season. “We are trying to shrink the floor,” Jackson says.

This all represents Golden State’s attempt to mimic, with their personnel, some of the Tom Thibodeau–style concepts that have swept the league over the last half-decade. It’s working so far. Only two teams have allowed fewer attempts in the restricted area, and though opponents are shooting well from there, limiting in-close attempts is more important than a couple of percentage points on the final result. Only 30 percent of opposing shot attempts are coming from in there, one of the half-dozen lowest marks in the league and a drop from between 34 and 35 percent in each of the last two seasons. For the second straight year, the Warriors have done well limiting corner 3s, and they appear to be doing a stronger job contesting jumpers overall. The stat-tracking service Synergy Sports has classified only 41.9 percent of opposing catch-and-shoot jumpers as “unguarded”; that number was 58.6 percent last season. The Warriors ranked 29th in points per possession allowed on spot-up chances last season; they’re up to 12th now, per Synergy.

It’s early, of course, and there are still some lingering issues here. Among lineups that have logged more than 17 minutes, only two have points allowed numbers that aren’t horrifying. The first is the starting lineup, allowing 99.2 points per 100 possessions — a mark that would rank seventh overall. Unfortunately, that lineup cannot score, in part because its center, Festus Ezeli, has bad hands and almost no offensive game; that group is scoring a near-Wizardian 93.3 points per 100 possessions. Basically, they’ve done enough to keep Golden State in games, but a lineup like that won’t cut it against top competition over the long haul.

The other lineup includes Biedrins and has scored just 94.5 points per 100 possessions. Biedrins has looked like 60 percent of a capable NBA player this year, but he has taken just six shots in 116 minutes, wants no part of the ball, and actively screws up Golden State’s offense by moving out of open passing lanes and into previously clear driving lanes. It’s sad to say, but he should not be playing.

That has left other frontcourt combinations to carry the load, especially the Lee-Landry combo. The Warriors have come out ahead with that duo on the floor, but only because their scoring has jumped off the charts — to 113.4 points per 100 possessions, which would lead the league by a mile. And the defense? Well, it hasn’t fallen apart, but it’s not good. Golden State is allowing 104.6 points per 100 possessions when Lee and Landry play together, about equivalent to Phoenix’s 26th-ranked D, and their defensive rebounding rate has fallen to a hair below league-average.

Golden State is also fouling more often and allowing more free throw attempts with Lee/Landry. And that is the one defensive issue that has carried over: The Warriors still send opponents to the line like mad. Only six teams have allowed more free throws per field goal try, and only three did last season. And some of those jumpers that teams are missing now will start going in for a spell.

Jackson is confident he can keep rolling out Lee/Landry if need be. “The team with those two — I don’t think we’re defensively challenged,” he says. “Never in their careers have they been labeled lock-down defenders, but neither one of them are dogs. They are professionals. They buy in.”

Bogut stands as an almost universal solution to these pending problems. He’s one of the half-dozen best defenders in the league when healthy, and unlike the solid Ezeli, he is actually a threat on offense — especially when he doesn’t have to be the primary threat. He can score in post and on the pick-and-roll, and he’s a fantastic passer all over the floor — including while catching-and-rolling to the hoop. He’d replace Ezeli in the starting lineup and could in theory take almost all of the minutes currently going to Ezeli and Biedrins — especially if Draymond Green proves a reliable smallish power forward. And he’d obviously allow Jackson to minimize the Lee-Landry pairing if necessary.

The Warriors keep pushing back Bogut’s return date as he deals with the effects of last spring’s ankle surgery. If he returns and stays healthy, this team may well jump ahead of the Dallas/Utah/Minnesota trio, especially as Curry and Klay Thompson find their strokes. They’re in the thick of it as is, and if they keep defending like this, they could stay there even without Bogut. It remains to be seen if they can do that without sabotaging their offense or stretching their defense too thin.