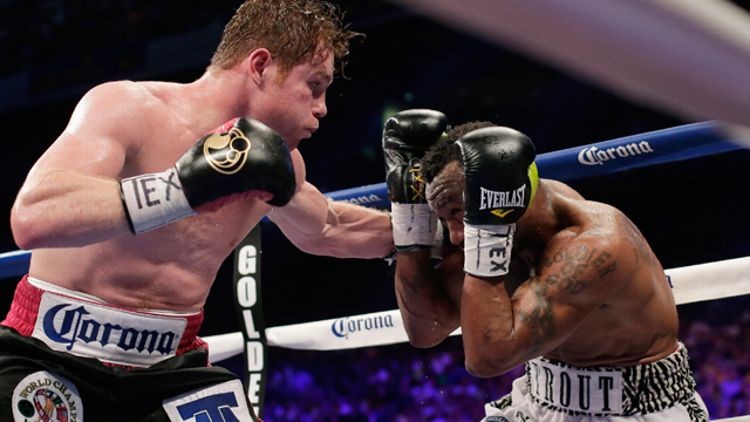 On Saturday night, Saul “Canelo” Alvarez won a unanimous decision against Austin Trout. We asked four questions about the fight.

Before the fight, many boxing pundits thought Canelo was all hype. Do you believe in Canelo now?

Jay Kang: I believed in Canelo before Saturday night, albeit for a somewhat arbitrary reason. I attended Canelo’s last two fights in Las Vegas and was struck by how his body shots just sounded different. At some point during Canelo’s fight against Josesito Lopez, I actually got a bit nauseated after hearing another thudding shot to the liver and Josesito’s long, pitiable exhale. Sportswriters get in trouble these days for making facile and possibly apocryphal distinctions like these. When I was in college, I recall trolling a baseball writer who had written something about how the crack of Andres Galarraga’s bat was somehow crisper than every other player in the major leagues.

In retrospect, building an opinion on a fighter based on the sound of his body shots was just as silly, especially when stacked up against the more concrete things we knew about Canelo. He does not move particularly well. He mostly staggers around in the ring, his lower lip stuck out like a petulant child. He keeps his body coiled up so that once he finds an opening, he can launch straight into his opponent with a barrage of heavy shots. The problem in the past has been Canelo’s inability to really find those openings. Before Saturday night, I don’t think many fight fans would have doubted Canelo’s abilities in a slugfest, but Austin Trout is an active, smart opponent who had just used relentless movement and activity to humiliate future Hall of Famer Miguel Cotto. It stood to reason that if Cotto could not figure out Trout, then Canelo, who, at the age of 22, still has quite a bit of learning to do in the ring, would probably get outclassed. Before the fight, the conventional wisdom went something like this: Canelo would have to hurt Trout to the body and cut down on his movement, but as long as Trout kept his head — and there was no evidence going into Saturday night that he wouldn’t — and avoid the big shot, he would probably cruise to an easy decision victory.

Well, both of those things happened on Saturday night. Canelo had trouble getting off his shots and seemed gassed in the middle rounds. But he did enough damage in select exchanges and avoided enough of Trout’s soft, pawing jabs to seem like he had won many rounds in which he got significantly outworked. In the seventh round, Canelo landed a straight right hand that sent Trout reeling. The loss of equilibrium caught up to Trout a second later — his knees buckled, he did the Bernie and went sprawling down to the canvas for the first time in his professional career.

I don’t really believe in revelatory shots in boxing. A knockout happens for all sorts of reasons, but almost never because a fighter had some reserve of power that we had never seen before. On Saturday night, Canelo threw a hard right hand and Trout got caught leaning forward. That’s it. The revelatory stuff showed up elsewhere, in Canelo’s subtle improvements on defense, his patience, and the accuracy he showed in exchanges. This was a significantly improved version of the Canelo who beat up Shane Mosley last year. His skills will never measure up to his wild popularity back home in Mexico, but by beating a legitimate light middleweight, Canelo earned his spot in pay-per-view super fights.

If you care about boxing, do you have to root for Canelo?

Rafe Bartholomew: Boxing fans often fancy themselves an embattled group. Their sport, they feel, is underappreciated and misunderstood and overlooked by the general sports audience. Whether or not boxing is dead or dying or on life support or if it is comfortably surviving with a patchwork fan base of ethnic audiences is not what matters here (it also might be the most tired discussion in sports). What matters is the sense among those who love boxing that they must evangelize for the sport, that they have to hold up every Ward-Gatti and Corrales-Castillo and Rios-Alvarado and scream to the mainstream: SEE, BOXING DOESN’T SUCK! IT’S NOT DEAD!

And because being a boxing fan today means caring about the health of the sport, it also means being hyper-aware of the need for crossover stars who can sell pay-per-view events and fill Las Vegas arenas and represent boxing on the two or three nights a year when the mass sports audience actually pays attention. For the past five or six years, Floyd Mayweather and Manny Pacquiao have been those stars, but now they’re on the downside of their primes and boxing needs a new star to emerge as its flag-bearer. Canelo has been pegged as boxing’s next marquee idol, because hey, whenever you find a 5-foot-9 redhaired Mexican fighter who looks like a cross between Blake Griffin and Matt Damon and whose body punches appear to inflict the same amount of liver trauma as a lifetime of heavy drinking, you turn that man into a star. Last night, after years of padding his record against B-list fighters and long-since-shot former champions, Canelo lived up to the hype by defeating Trout, one of the top three junior middleweights in the world.

So is it time to embrace Canelo and root for him — not necessarily as a fighter, but as the face of the sport whose continued success is “good for boxing”? Hell no! I’m sure that Justin Bieber’s continued success is good for the record industry and the people at Live Nation, just as the sales of James Patterson’s next novel will keep a segment of the publishing business chugging along for another year — that doesn’t make their work any less awful. To me, Canelo is the Biebs of boxing — a true talent whose success feels wholly canned and manufactured. He showed Saturday night that he has it in him to defeat world-class fighters. But for a hard case like me, it’s too late. He was given cream-puff opponents and star status and a championship belt based on his pretty mug and uncommon hair color, and in his 43rd fight, he finally did something to earn it. Big whoop.

The judges’ scorecards created quite a bit of controversy. Stanley Christodoulou scored it 118-109 for Canelo. Oren Shellenberger scored it 116-111 for Canelo and Rey Danseco scored it 115-112 for Canelo. Everyone else seemed to have watched a very closely contested bout. What the hell were the official judges watching?

Kang: I had it 114-113 for Canelo, but I certainly understand those who had Trout ahead by one or two points. And I’ll be the first to admit that watching a fight from ringside can be a completely different experience from watching it on television. Up close, Canelo’s power might have been a lot more evident and those subtle defensive maneuvers he’s learned may have been a bit more obvious. But there’s no explaining a 118-109 card from a judge who has been relatively reliable in the past. Bad decisions in Texas have a way of generating conspiracy theories, especially when they involve boxing’s new golden child, but short of finding an actual transfer of money or tape of some backroom conversation in which Canelo’s promoters paid a judge to give Canelo the fight, let’s just assume that Christodoulou scored the fight the way he saw it. Was there a world in which Canelo won eight of 12 rounds?

I went back on Sunday morning and rewatched the fight and ended up giving Canelo one more round than I had before, for a 115-112 victory. But I am willing to admit that my scoring falls on the extreme edge of the range of possible outcomes — I don’t value activity for activity’s sake, I tend to overpenalize fighters for swinging and missing, and I probably put too much stock in knockouts and silly things like body punches that “just sound different.” How anyone could go much higher than 115-112 is beyond me, and although Christodolou’s score didn’t change the outcome, it shoveled just a bit more dirt on the public’s trust of how fights are judged in boxing.

(For those wanting a more extensive look into the scoring, Bad Left Hook did a great job breaking down the fight round-by-round.)

As for the open scoring system that reveals the official scorecards to both fighters, let me just say this: There is no rationale for keeping a system that robs everyone involved of the heightened drama of the championship rounds. Get rid of the system now.

In the grand scheme of Texas boxing travesties, was this score actually not half-bad?

Bartholomew: Kinda. It was a close fight, and many ringside experts have said it could have gone either way, but at least a strong case can be made for Canelo’s points victory. It’s hard to say the same thing about Julio Cesar Chavez’s draw with Pernell Whitaker, which took place in the same arena 20 years ago. I’ll let welterweight Paulie Malignaggi, who lost a shamefully wide decision to hometown fighter Juan Diaz in Houston in 2009, have the final word on how bad Texas judging can be.