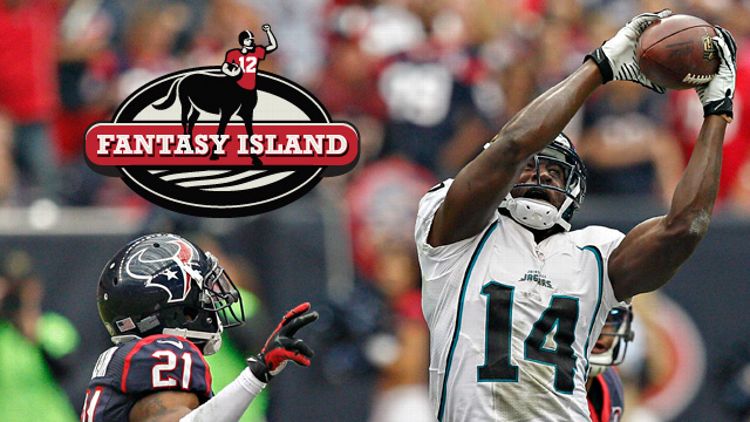 It is said that the amino acid tryptophan in turkey (along with undue exposure to the Detroit Lions) makes you drowsy and disoriented on Thanksgiving. I consumed a behemoth of a turkey sandwich Sunday, so I was immediately skeptical when ESPN.com’s handy fantasy points leader board listed Chad Henne and Justin Blackmon among Week 11’s top scorers. Possible explanations: a rogue coalition of tech-savvy Jaguars fans hacked into Bristol’s servers for mysterious reasons, or my groggy, tryptophan-fraught eyes were failing me. Two days later, it appears that Henne and Blackmon were actually responsible for two spectacular fantasy performances. [Insert Mayans joke here.]

What angered me most about the Jags-Texans game was Blaine Gabbert’s elbow injury. Not because I’m Blaine’s distant cousin (I’m not), but because I had money riding on the Texans -15.5. Facing the very real prospects of a post-Gabbert world, it dawned on me that Jacksonville’s offense might play competently enough to cover the spread, my wallet be damned. With Henne under center for the remainder of the season, they might even play competently enough to harness Blackmon’s absurd talent into fantasy superstardom. Adding this beast to your roster will be as satisfying as Thursday’s plate of turkey, minus the subsequent fatigue.

So the fifth pick in this year’s NFL draft is currently first in the hearts and minds of fantasy owners nationwide. Blackmon, available in 55.4 percent of ESPN.com leagues, is the crown jewel/Thanksgiving turkey of Week 12’s waiver wire. But which players are Grandma’s best side dishes?

T.Y. Hilton, Colts WR, available in 96.7 percent of ESPN.com leagues
This slippery rookie isn’t the main dish — the distinction of being Andrew Luck’s no. 1 target belongs to Reggie Wayne — but Hilton is a serviceable WR3/flex, and he’s earned his spot at the table.

Danario Alexander, Chargers WR, available in 95.5 percent of ESPN.com leagues
Every football fan with a mouth has spent the past month lambasting Norv Turner, Philip Rivers, and the Chargers organization as a whole, but real-life wins and losses matter naught in fantasy. What do matter are Danario Alexander’s impressive stats from these two outings: 12 receptions, 230 yards, and three touchdowns. He’s supplanted Malcolm Floyd as Rivers’s no. 1 target. Claim him while you can.

Visanthe Shiancoe, Patriots TE, available in 99.8 percent of ESPN.com leagues
Fair warning: Aaron Hernandez could play on Sunday, rendering this waiver wire suggestion moot. Bill Belichick probably doesn’t want to start a dude best known for having his genitalia on national television, but he’ll deal with it. Remember that whoever lines up at tight end remains the most important member of the Patriots offense not married to an underwear model.

Player to Avoid: Beanie Wells, Cardinals RB, available in 52.1 percent of ESPN.com leagues
Beanie Wells is not the solution to your running back woes. I have nothing against the man — we both came of age in Greater Cleveland and matriculated to Ohio State. This is more a condemnation of any team with the audacity to start Ryan Lindley against the Cardinals meat grinder of a schedule, which features upcoming tilts against the Seahawks, 49ers, and Bears. Opposing defenses will stuff seven men in the box and dare Lindley to pass, leaving Wells with no room to run. I’d rather start a Browns receiver than have to rely on Wells down the stretch. If you need a running back, try Denver’s Ronnie Hillman.