What’s Wrong With the Pacers? 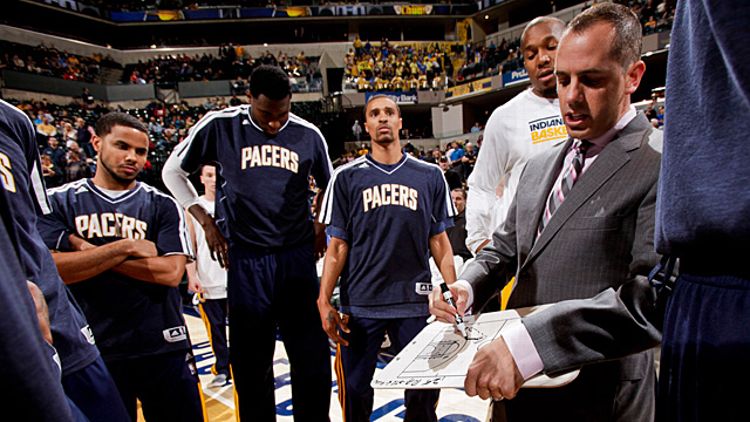 Three weeks into the season and it’s become clear the Indiana Pacers are in big trouble. An offense that ranked in the top third of the league last season has completely slid off the rails, ranking 29th in offensive efficiency, just ahead of the woeful Wizards team they defeated last night. It’s been a rather startling development for an Indy team many considered to be a solid, up-and-coming team, capable of making a deep run in the Eastern Conference playoffs.

Watching the team squeak past the Wizards, it’s hard to imagine they are even remotely capable of winning a game in the postseason much less an entire series. So what went wrong exactly?

The Danny Granger–Size Hole in the Roster

Though not a true no. 1 option, Danny Granger, out with a knee injury, was a stabilizing force who served the necessary function as volume scorer and shot creator on the perimeter. This is key for a post-up-heavy offense. The Pacers were hoping Paul George would blossom and take on that Granger role, but instead the third-year pro has regressed under the burden.

That has forced the team to rely on the trio of Gerald Green, Sam Young, and Lance Stephenson far more than they could have ever imagined. Head coach Frank Vogel has been so production-starved on the wing that Young, an offensive train wreck up to this point in his career, played 35 minutes last night against the Wizards. To be clear, Granger isn’t LeBron James, but the butterfly effect caused by his absence has made it seem like it.

For a player whose production depends on his ability to score on the block, Hibbert has trouble consistently anchoring himself in dangerous operating areas. When unable to catch deep in the paint, the Pacers big man sees his entire game thrown off. The result? Hibbert’s PER through the first 12 games puts him behind dynamic frontcourt players such as Ronny Turiaf, Hasheem Thabeet, and Spencer Hawes.

In games against Tyson Chandler and Emeka Okafor (in the first Wizards tilt), Hibbert was completely manhandled. The Pacers averaged just 82.5 points in those two contests. With Vogel structuring the offense around his big man, that level of production simply won’t cut it, especially with Granger out.

Their shots just aren’t falling. In a bit of hopeful news, the Pacers are simply just missing good looks from deep. Green and George currently check in slightly under their career marks from 3-point territory, while the point guards — D.J. Augustin and George Hill — are well below their established norms. With the exception of Green, whose shot selection is rather questionable at times, one should expect a slight uptick in production if these players can approach their normal benchmarks.

For each of the past three seasons, Hansbrough has failed to improve the team’s offensive rating when he’s been on the floor, according to NBA.com. This year has seen the biggest disparity (Pacers’ overall Offensive Rating is 93.6; Hansbrough’s 91.2) and yet Vogel still commits more than 20 minutes a night to the former UNC product. Sure, Hansbrough ranks second among Pacers regulars in PER at 16.8, but much of his productivity comes at the expense of team offense. Yesterday’s game against the Wizards provided a perfect example of how that works:

As the clip demonstrates, Hansbrough routinely forgoes opportunities to make a pass of any sort, opting instead to barrel out of control toward the rim or unleash a jumper — despite being a middling shooter — from the elbow. His individual performance looks just fine, but the team’s overall effectiveness clearly takes a hit when he’s on the floor. One wonders if Hansbrough is secretly a cyborg sent from the future to single-handedly destroy the Pacers’ offensive efficiency every minute he’s in a game.

The amount of on-court freedom Vogel gives his players seems to be an unwise choice, given how many players of questionable basketball intelligence inhabit the roster. Starting shooting guard Stephenson, Young, and Green all have established reputations of poor on-court decision making. Ian Mahinmi and Hansbrough aren’t exactly known as basketball savants either. It’s hard enough for a coach to make an offensive system work fluidly with one or two low-basketball-IQ players, but having a rotation half full of players who don’t make good on-court decisions strains an already difficult situation.

The biggest culprit in all this is the team’s snail-like tempo. With the exception of last night’s first half against the Wizards, the Pacers — ranked 27th in pace, according to ESPN.com — often bypass early offense in transition to focus on operating in the half-court against a set defense. When struggling to score points, walking the ball up is hardly the solution.