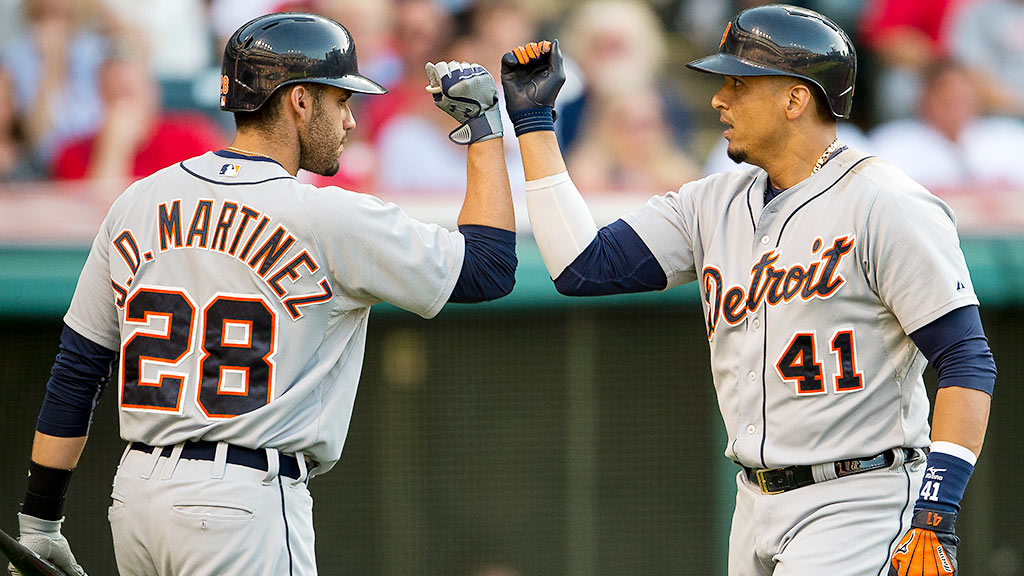 Does your fantasy league share a July 31 trade deadline with Major League Baseball? Are you making a push for the big Yoo-hoo shower? Out of the race but building for next year? Experiencing a weird, burning sensation that requires medical assistance?

The Roster Doctor is here to help. Below you’ll find answers to actual emails from actual readers. If your question didn’t make it into today’s column, hit me up at grantlandfantasy@gmail.com for future counsel. Onward!

I picked up J.D. Martinez early into his tear, which created a somewhat crowded outfield on my team. I’ve started to shop him around my league for pitching, but am having a hard time getting decent value for him since no one fully believes he can keep up these numbers. How should one handle this type of situation with a player highly outperforming expectations: Try and convince people with advanced stats, or just start to lower my expectations as to what I can get?
—Kevin

Let’s start by taking stock of where Martinez came from and of what he’s done this season. First Houston, overloaded with talent and on its way to 125 wins this year, had to release him. The Tigers scooped him up and gave him his first taste of game action on April 21. Initially a part-time player, he took over as an everyday starter on May 27. Since then, he’s hit .348/.376/.646 with 11 homers and 13 doubles in 161 at-bats. For the year, he’s batting .327/.363/.606, outhitting everyone except Mike Trout, Andrew McCutchen, and Troy Tulowitzki.

On the one hand, there are reasons to believe that Martinez’s surge might be (somewhat) for real, thanks to major changes in his approach. On the other hand, he’s struck out 55 times this year while walking just 13 times. He’s enjoyed the biggest jump of any batter in hard-hit average, an ESPN-tracked stat that simply divides the total number of hard-hit balls by at-bats. As pitchers make more of an effort to get Martinez to chase, it seems like the batting average will fade even if the power sticks.

In everything from novice leagues to expert leagues, people are naturally slow to trust players who seemingly come out of nowhere. So if no one’s biting on Martinez, trade a more established guy instead. While fantasy owners are often reluctant to give up real value for sudden breakouts, they’ll often overpay for established players experiencing lousy seasons. I recently traded away Dustin Pedroia and Shin-Soo Choo in two separate deals and got a ton for each. It’s possible that I sold low and will regret it later, but Occam’s razor suggests that lingering injuries for Pedroia and Choo will either (a) limit their production for as long as they stay in the lineup, or (b) force them to the disabled list.

One of the most important elements in fantasy baseball is going beyond simple mottos like “buy low, sell high” and figuring out when it actually makes sense to sell low. If you can cash in someone like Pedroia or Choo and just keep Martinez rather than selling him for 50 cents on the dollar, that’s what you should do.

While I thoroughly enjoyed Victor Martinez’s first half of the season, I find it highly unlikely that he can replicate that success in the second half without a trip to the Fountain of Youth, or if he somehow came across A-Rod’s stash of gummies. What do you think is a fair haul for V-Mart?
—Brian

That’s right, the Tigers have two players named “Martinez” putting up huge numbers. And while you can make a case for or against J.D. keeping up his current production, it’s tough to find any reason to doubt Victor. I mentioned hard-hit average for J.D., who ranks among the league leaders at a tick below 24 percent. Well, 35-year-old Victor leads the majors in that category, at 26.5 percent. (For context: The league average is 16.8 percent, and Martinez’s all-world teammate Miguel Cabrera is at 24 percent.) There’s also no doubting Victor Martinez’s batting eye, given that he’s struck out just 29 times in 331 at-bats. Though he’s no longer on pace to pull off the DiMaggio-esque feat of more homers than strikeouts in a season (something Joe D did an amazing seven times), V-Mart’s 21 long balls and 20 doubles look pretty damn good compared to those scant 29 punchouts.

The only stat that looks like a bit of a fluke is that home run total. According to ESPN’s Home Run Tracker, Martinez’s bombs have averaged just 388.8 feet, below the average MLB distance of 395.8 feet, and lower than the average distance for any other hitter with as many homers this year. Much of that stems from Martinez’s propensity for sharply pulling balls to straightaway right field or even off the foul pole. We can wave off some of the doubters by citing Martinez’s incredible bat control, strike zone mastery, and ability to hit balls hard this year. Still, this is a big power surge compared to recent norms, leaving Martinez only four shy of his career high, set seven years ago.

So yes, you’re going to get a few thinly veiled A-Rod comments when a player has a career year like this at age 35. But if everyone in your league is going to be that skeptical, screw it and keep the guy. Even if fewer balls curl inside the foul pole for home runs the rest of the season, Martinez should continue to perform. He’s been transcendent at the plate all year long, a weird mash-up of peak Ichiro with a little DiMaggio sprinkled in. You should be able to get a top-10 starting pitcher for someone performing that well. Basically, if you can’t get almost any arm short of Clayton Kershaw, keep V-Mart and enjoy him.

I am in sixth place in my 11-team AL-only roto league after sitting in 10th three weeks ago. I managed to add 17 points due to a hot pitching streak, but my hitting is atrocious and I know I cannot reasonably make a run at finishing in the money unless I make a trade. That leaves me with the option of trading potential keepers to make a run or trading non-keepers to build for next year.  I have never tried to “build for next year,” so my problem is properly valuing minor league prospects and younger players in weighing trade offers.  Do you have any suggested methods for doing so?
—Adam

It’s hard to answer this question without seeing your exact roster, but if you’re calling your hitting “atrocious,” it might already be too late to make the kind of go-for-it moves that’ll get you where you want to go. It sounds like your team is the fantasy baseball equivalent of the Royals right now: hanging onto the periphery of a pennant race with good pitching and a need for hitting. And like the real-life Royals, the right approach might be to acquire a bat, but not one that will force you to gut your young talent reserves. A Marlon Byrd type of hitter, basically.

As for how to evaluate prospects, every league is different, and in this case you can’t go by MLB standards. The Twins wouldn’t trade Byron Buxton even if they could get David Price for him tomorrow. But fantasy leaguers don’t have fan bases numbering in the millions, nor the pressures of managing $150 million payrolls and answering to billionaire owners. We’re impulsive. We want to win right now — to hell with tomorrow. So if you own a Price or a Kershaw or a Yu Darvish, you should absolutely ask for prospects of Buxton’s caliber. Better yet, ask for two or three. Better still, ask for top prospects who’ll be ready to produce in the big leagues by next year. No need to wait until 2017.

I currently have Allen Craig slotted in as my third outfielder.  He’s having a poor season and has shown no signs of turning it around since the All-Star break. He is even splitting time since Oscar Taveras is back up with the Cardinals. I need to pick up a third outfielder and my options are Gregory Polanco, Alex Gordon, and Kole Calhoun.  Who do you suggest going forward? [Curtis] Granderson and [Marcell] Ozuna are also available.
—Luke

For future reference, in a league that shallow, you’re best off being more aggressive in replacing underachieving players if something in their profile has fundamentally changed. In Craig’s case, we’re talking about a hitter who derived a big portion of his value from his supernatural numbers with runners in scoring position; that’s gone now, so even if he were hitting up to normal standards, he’d be a much less valuable fantasy asset as a moderate-power guy with no speed who lacks off-the-charts RBI totals. Anyway, judging by the impressive talent sitting out there on the waiver wire, it sounds like you play in a 10-team mixed league. Given how shallow your league is, only needing to start three outfielders (as opposed to five), and being this late into the season, I’d consider the same strategy for outfielders as I would for pitchers: stream. Is Calhoun going up against the Astros and Rangers in a given week? Grab him and start him. Does Granderson travel to Chase Field and Coors Field the week after? Drop Calhoun and go with Grandy. All the players you named are in the same ballpark of ability, so you’re best off squeezing every drop of production you can out of that third outfield spot and focusing on the numbers, not the names.

Put simply, one of my teams this year stinks. That said, I am blaming most of this on injuries ([Masahiro] Tanaka, [Matt] Wieters, Wil Myers, Ivan Nova, Jamie Garcia, Yadier Molina all seem to have sunk my proverbial battleship), and am looking forward to plucking some September call-ups who may be able to help me next year. Are there any callups in particular who you see who might make an impact this year, or be able to help a big-league club next year?
—JJ

Some candidates for call-ups, either in September or possibly sooner:

Jorge Soler and Javier Baez (if the September promotion rumors are true); Nick Kingham (if the Pirates opt to go the homegrown route rather than make a trade); Francisco Lindor (if the Indians can trade Asdrubal Cabrera for something that will help them now and in the future, given they’re in the race — not easy to pull off); Joc Pederson (if the Dodgers finally giving Yasiel Puig a shot in center doesn’t delay Pederson’s promotion even more); and Noah Syndergaard (if you’re ready to move early on a Mets rotation that could be the youngest and most exciting in baseball by 2015).