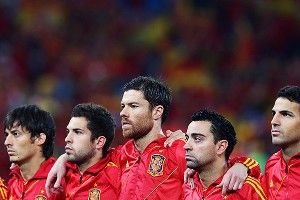 Last time around, I did a preview of the quarterfinals. I picked Germany, Portugal, France, and Italy. If my success rate at crossing the street was as good as my success rate at picking knockout soccer matches, I would be dead. So let’s take a look at the semifinals!

How They Got Here: Germany put in the most likable performance of the quarterfinals, snuffing out Greece, 4-2. That might seem like a bit of an odd compliment. But after four quarterfinals matches, two of which were, frankly, really difficult to enjoy on a surface level, it really makes you appreciate just how charming and fun the German team is. There’s just something effervescent about them. For a side that has been touted — in one iteration or another — since the World Cup in 2006, I’m only really now enjoying them.

In a tournament that has seen 20 headers go in, watching Sami Khedira and Marco Reus crush volleys in from short-range against Greece had me singing “Seven Nation Army” to myself. And then feeling really bad about it, because come on, man, give that song some room to breathe.

Italy arrived to the final four of Euro 2012 after playing an emotionally draining, physically consuming, and no doubt psychologically punishing battle against England. I would rather review how the Dewey Decimal System works than re-watch England-Italy, but don’t blame the Azzurri for that. They took 20 shots on goal. They went for it. Now, just days after that match finished, 4-2 on penalties, Italy will suit up again against a well-rested German side.

What to Watch For: Which begs the question — which German side? In the quarterfinals Germany manager Joachim Low dropped Lukas Podolski, Mario Gomez, and Thomas Muller in favor of Reus, Miroslav Klose, and Andre Schürrle; two young, wide midfielders flanking one of the best international goal-scorers of his generation. Will Low go back to refreshed Podolski, Gomez, and Muller? Will he stick with the trio that served him so well in the quarters? Some combo of the two? The other major question is whether German midfield dynamo Bastian Schweinsteiger will start and/or play for Germany. Low judged him as “poor” in the match against Greece, pointing to a bum ankle as the source of his problems.

Speaking of bum ankles, bum legs, sciatic nerves, and “a general state of fatigue in the squad,” Italy is a little banged up! Which is understandable. They did all the running on Sunday against England. The Azzurri are waiting on the fitness of midfield lion Daniele De Rossi, central defender Giorgio Chiellini, and fullback Ignazio Abate. The latter might be the most important injury question. One of Germany’s most lethal areas of attack comes from the left side, where you’ll find team captain Philipp Lahm bombing forward. He’s pretty good, by the way. Ask Angela Merkel.

Abate, along with, one would guess, Claudio Marchisio (Italy play rather narrowly, so a central midfielder would likely help mark Lahm), would be responsible for handling the Lahm threat.

One more thing, tactically speaking, that you should keep in mind. It was suggested that one of the reasons Andrea Pirlo looked like he was recording a solo album against England was that Wayne Rooney, who had been charged with man-marking the Juventus midfielder, was neglecting his duties. Low has said that no one German player will be responsible for covering Pirlo. “That would make no sense,” Low said. Have some of that, Roy Hodgson!

How They Got Here: Spain got here by letting us all down. By disappointing us. By not dazzling us enough. By not scoring enough headers. By not kicking it long enough. They’ve had too much possession. They haven’t had enough. Xavi needs to run more. And Ramos shouldn’t have cut his hair. And Iniesta — don’t like the look that guy is giving me. They didn’t rip a hole in the space-time continuum. They let us all down. Boring, boring Spain.

Winners of Euro 2008 and World Cup 2010, Spain are now winners of the We’re Tired of You Winning Trophy. This happens to all dynasties. Everything ends, I suppose. (At least that’s what I learned from the Matrix trilogy.) And there is something to how Spain has been choking the life out of opposing teams, holding on to the ball for seemingly endless periods of time, in this tournament. It has lacked a certain magic. It’s not entirely unlike the sensation lots of people felt watching the Spurs. “I know it’s good for me, but I still don’t like it.”

If Spain has lost a lot of neutral public support — and that’s an assertion I’m basing on anecdotal evidence, at best — then Portugal has picked up a lot of their spill-off. Usually pegged as winking, diving, dirty bastards (sorry, Portugal! You do have Pepe, after all!), they have looked like a very athletic, very fun, and very together team during this tournament. Ever since beating Denmark, 3-2, they’ve had a little star dust sprinkled on them. (That’s what’s glistening in Ronaldo’s Exxon Valdez hairdo, by the way.)

What to Watch For: Control. Both in terms of possession, of which Spain will likely have a lot, and temperament, with which Portugal has occasionally had some problems. This match is going to feel, in some ways, like a Real Madrid intramural, with Pepe, Fabio Coentrao, and Cristiano Ronaldo lining up against Alvaro Arbeloa, Sergio Ramos, and Xabi Alonso. If asked to bet on the proceedings being chippy or cordial, I’d go with the former. At least that’s what I’m hoping. Teams have been very respectful of Spain, maybe too respectful. Portugal doesn’t seem like the kind of side that will have that problem. Look for Portugal to prompt the referee to make some decisions early and chop the game up into smaller pieces rather than the languid stretches Spain would prefer.

Also be aware of the Great Iberian Striker Drought of 2012. Starting Portugal striker Helder Postiga is out with injury, leaving old warhorse Hugo Almeida (who probably should have been taken to the warhorse glue factory by now) to fill in. For Spain, we will either see Cesc Fabregas as a “False 9” or Fernando Torres as “a guy making runs after balls he can’t catch up to.” If there’s going to be goals, odds are it will come from the midfield — from David Silva and Andres Iniesta of Spain and Ronaldo and Nani of Portugal.