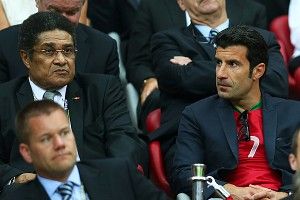 Much respect to European football Gods who wear their national team jersey underneath a blazer that probably cost more than all of my worldly possessions. Also, great to see a stoic suave-ologist like Figo lose his cool in the most passionate way possible. (H/T to 101GreatGoals, as usual, on this.)

Update: Via reader Nelson Vasconcelos wants you to know that our favorite Portuguese announcer got pretty excited as well. LAAAAAAASERS!!!!!!!!!!!!!