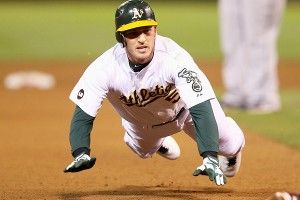 The Red Sox agreed to a one-year, $9.5 million contract with shortstop Stephen Drew, giving all-glove/no-bat prospect Jose Iglesias another year of seasoning in the minors.

Drew hit .265/.328/.433 in his seven-year big-league career. When healthy, he profiles as an above-average hitter who’s about league-average defensively. Of course, that’s the rub. Drew played just 165 games over the past two seasons; a serious ankle injury is responsible for causing basically an entire season’s worth of missed games. He turns 30 in May.

The Drew signing furthers Boston’s offseason method of making reasonable deals for decent major leaguers who are good citizens and won’t leave them with replacement-level options. Previous notable Red Sox deals this winter include a three-year, $38 million contract for outfielder Shane Victorino and a two-year, $26.5 million pact with right-handed starter Ryan Dempster. Boston reportedly agreed to a three-year contract with Mike Napoli earlier this month during the winter meetings. But that contract has not been made official, with medical issues reportedly hanging over the first baseman/catcher/designated hitter’s head. In signing Victorino and Drew and attempting to sign Napoli, the Sox are also trying to buy low on players who had disappointing 2012 seasons. One could argue that none of the three deals constitutes a gigantic bargain. But in a market pumped up by baseball’s soaring revenue streams, it’s unlikely that any of the three turns into a disaster, either.

Boston’s deals this offseason echo what the Yankees have done, with an effort to avoid potentially onerous megadeals with the biggest-name players on the market. The two main differences are that Boston’s OK with going longer than one year (the Yankees have done so with only one player this winter, Ichiro Suzuki), and the Yankees had fewer major holes to fill than did the Sox, meaning they have a better chance of winning in 2013 with this conservative tack than Boston does.