Don’t Fear The Reaper: In Defense Of Ryan Clark 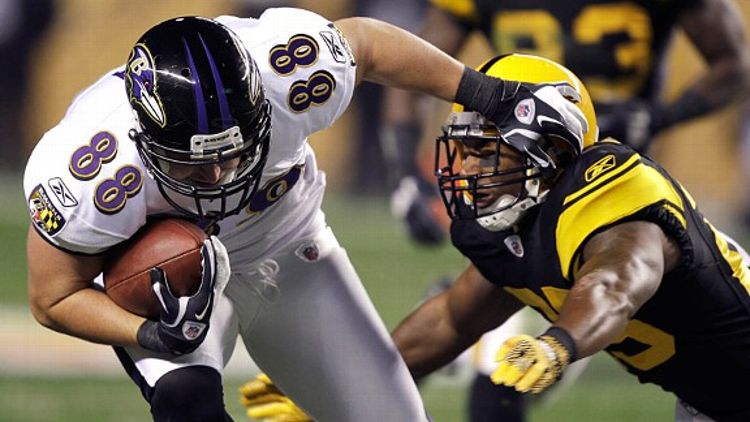 I say that pretty much every time I watch the Steelers play. Almost without fail, it comes after Pittsburgh safety Ryan Clark has blown up an opposing receiver. Sometimes the opposing player gets up quickly. Sometimes slowly. And sometimes, as in the case with Willis McGahee in the 2009 AFC Championship game, it doesn’t look like he’s going to get up at all …


It’s gotten to the point where I’m associating Clark with hits that he wasn’t even responsible for. On Sunday night, in what was a typically gladiator-like game with the Ravens, Clark threw a battering ram of a shoulder at Baltimore’s Ed Dickson.

Almost immediately after the play I thought to myself, “That’s the same kind of beserker hit he put on Pat White from last January.” (I always like to point out the date things happen when I’m talking to myself). Except it wasn’t Ryan Clark who knocked White out. It was Ike Taylor.

I wonder if Roger Goodell is having the same problem with associating Clark with every concussion-causing, memory-erasing tackle that goes on in football. That’s really the only reason I can come up with for why the commissioner fined Clark $40,000 for his hit on Dickson.

I have no doubt Dickson had an out-of-body-experience when Clark hit him on Sunday and I think even Ryan Clark would admit that he plays football on the razor’s edge between sound defensive technique and physical assault. But that hit was clean. And more than that, the hit was honest. Just like Ryan Clark.

Players like Clark, an LSU product who played with the Skins and Giants before establishing himself as Troy Polamalu’s safety partner in the Steelers defensive backfield, will likely be fined or legislated out of the game. In 10 years you probably won’t see hits like that or players like him. And it sounds like Clark knows it.

“Am I supposed to let him catch it and then wait for him and hug him?” Clark recently said. “Should I throw a pillow at him? Should I blow a whistle? ‘Hey look, I’m about to tackle you.’ No, that’s not football.” Clark added, “So it’s going to turn into if you’re going to fine me $40,000, I might as well put him to sleep for real or I might as well blow his knee out.”

That statement caused a lot of pearl-clutching, but what Clark was saying, as he clarified on Twitter , was that, given the NFL’s condemnation of above-the-chest hits, the knees are the only thing that’s available to hit. And that’s the problem. “The knees is all I have left to hit to avoid a fine! Full speed and someone can be injured. That was my point.”

I’m going to regret writing these words when Ryan Clark or Dunta Robinson or Bernard Pollard or any other heavy hitter ends somebody’s career (or worse), but I have nothing but respect for Clark and love watching him play.

As a Philadelphian my heart sank reading about the depression and trauma that destroyed former Eagles safety Andre Waters’ life. And I am smart enough to know that there was a direct relationship to what he did on the field and what happened to his life once he left it.

But I’m also smart enough to know that I, and millions of NFL fans, shouldn’t get to have it both ways. We don’t to let our inner Fox robot out on Sundays, cheering for near-coma inducing hits and then sternly tut-tut the players that dole them out. And I don’t think the NFL should have it both ways either.

We’re coming to some kind of crossroads with football. Something fundamental is going to change, because something catastrophic is probably going to happen on the field one day. I know that. But that is not on Ryan Clark, or any other defensive player who is playing the game in the exact way he has been coached his entire life.

Roger Goodell can fine Ryan Clark and his teammates (the Steelers have been fined 13 times to the tune of $182,000 this season). He can try and legislate hits and make it prohibitively expensive for defenders to play a certain way. But there is something, perhaps tragically, embedded in the DNA in the sport that makes it incredibly violent. Violence has consequences. And none of that is Ryan Clark’s fault.

I might regret this, but in the meantime I’m going to enjoy watching him play.