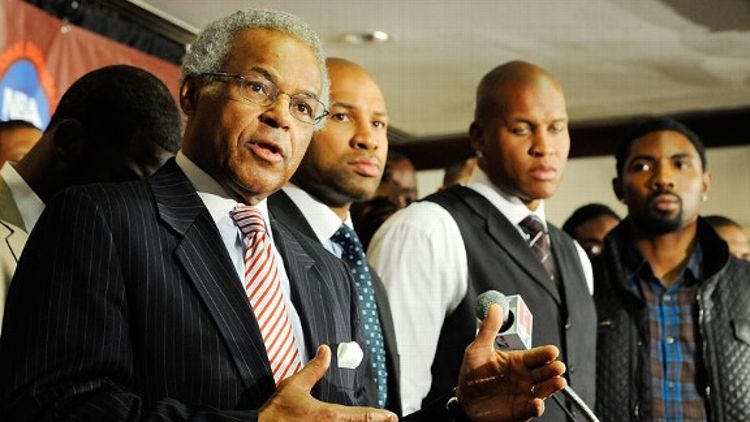 Nearly every one of these NBA labor negotiations ends the same way. Press conference areas are set up, usually in adjacent rooms, and NBA commissioner David Stern and deputy commissioner Adam Silver and NBPA executive director Billy Hunter and Derek Fisher discuss the fruitlessness of that particular session. Those conversations with the media sometimes diverge. The sides can be specific or vague. They can project optimism, pessimism, hope, frustration, progress, or regression. But so far, they never include the one thing everyone in the room is hoping for: a joint conference — and a deal.

When the talks don’t go well, there are warnings of “extreme consequences,” accusations of being “snookered,” or the cancellation of more games. When it appears as though inroads have been made, however, the opposite occurs. Such was the situation early Thursday morning, when the league and union ultimately revealed nothing to the gathered reporters after another marathon session, other than that they would meet again in the morning.

“We’re not failing and we’re not succeeding,” Stern said. “We’re just there.”

“There was enough give and take on both sides to merit us both coming back tomorrow,” Hunter said.

He seemed fatigued, yet still upbeat, after Wednesday’s session. I know, because I found myself sharing an elevator — and later a car ride — with him.

The union had cars settled outside the hotel that had choked down traffic to one lane. Those drivers might have one of the worst jobs out of everyone involved in this lockout. They drop the parties off and — because of the unpredictable nature of the negotiations — wait all day for the sessions to end.

In the hotel elevator, I asked Hunter where he was headed. He told me he was going uptown, and I replied that his destination wasn’t far from mine. He asked if I wanted a ride. It was a kind gesture after a long day. I accepted.

Hunter wore a pinstriped suit, which I later saw again when I watched the replays of the news conferences. His tie was loosened a bit when he jumped shotgun into the black SUV. I sat behind the driver in the back, next to a member of the union’s special events and sponsorships department. I wish I could tell you that Hunter spent the drive telling me about the ins and outs of the day, or that he said a deal was close and all that was left was to wrestle out the final hang-ups with Stern when they reconvened.

But that’s not what happened. Hunter made a few quick calls as the SUV darted up Third Avenue. He joked that he could go a while before he stepped foot into a New York City hotel again, and that he could use a change of venue every so often. He pointed out a couple of good restaurants along the way. He noticed a woman walking alone, and he seemed concerned. “Walking by herself at 1:30 in the morning?” Hunter said.

The driver stopped at Hunter’s place at a few minutes before 2 a.m. I kicked myself for not gaining any insight during the 15-minute ride. After dropping him off, the driver asked me if a deal had been reached. No, I told him, everyone should plan on another long day.

Previously by Jonathan Abrams:
What Would a Compressed NBA Season Look Like? A Historical Perspective
Q&A: Greivis Vasquez
Q&A: Derrick Williams
Reporting on the Reporting From Friday’s NBA Lockout Meeting (Updates)
The Winter of Jerry West

Don't Fear The Reaper: In Defense Of Ryan Clark