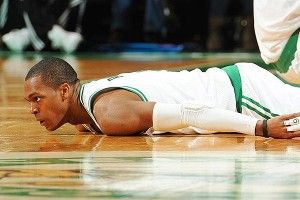 Here’s Kevin Garnett, explaining Rajon Rondo’s insane stat line — 18 points! 17 rebounds!! 20 assists!!! — against the New York Knicks, which came in the midst of heavy trade rumors Sunday: “I’ve been around [enough] him to know when he’s motivated and when he’s more than motivated. Tonight was one of those nights. The trade talks really is a motivating factor for him. If you know Rondo, he’s an ‘I’ll-show-you’ type of person.” Here’s Rondo himself, after the game: “I think I’ve been playing better since the trade rumors, so keep them going.” And here’s the rest of the world (at least according to a condensed Twitter reading): “Ahhhhdhoowhwhwhahhhdkdkaahhhhh!!! Rondo just told Danny Ainge to get off the damn phone!!!”

If you want to know whether the Boston Celtics will truly squash the trade chatter in the light of Rondo’s bonkers performance — then, sorry, that’s not so clear. But if you want to know whether Rondo really does play better when he’s pissed off — well, we can try to find an answer for you. Thanks to his oddly uneven skill set and his, shall we say, tempestuous nature, Rondo has found himself in the middle of more speculative trade talk than the USITC. (It’s a quasi-judicial federal trade commission. It provides information on matters of international trade and competitiveness. Um, never mind.) So, does he actually perform better in the midst of trade rumors? Does he truly use rage as fuel? Has Ainge been maniacally incepting Rajon Rondo for years?! Let a reverse chronological breakdown shed some light.

The Rumors: ESPN’s Chris Broussard reports that, once again, the Celtics are “aggressively trying to trade Rajon Rondo.” Also, once again, everyone maybe hates him: “Celtics find Rondo’s personality to be too high-maintenance and his clashes with coach Doc Rivers remain an off-court distraction.” The specific targets for Boston include the Lakers’ Pau Gasol and the Warriors’ Stephen Curry, with the latter trade either not happening because Golden State straight balked, or because Boston was concerned about Curry’s history of ankle injuries.

The Reaction: He lays down a monster! In 48 minutes of action (plus every minute of OT) against the Knicks on Sunday, Rondo tallies the aforementioned 18 points, 17 rebounds, and 20 assists, and tacks on a steal and a block for good measure. The last guy to get a triple-double with 17 or more in three statistical categories? That’d be Magic Johnson, back in 1989. (And not since 1968, when Wilt did it, has anyone gone for 20 or more in three categories.) Making it more impressive was the fact that the Celts needed every last one of Rondo’s manifold statistical achievements to claim victory in what was another tight New York-Boston battle.

And the kid does it in style:

This seems like a good time to note that Rondo has long made a habit out of showing up to high-profile games, whether or not the high-profile-ity of them has to do with a rumored end of his Celtics tenure. As Sean Grande writes: “13 of Rondo’s 17 career triple-doubles have now come in nationally televised games. Last year, his season-high 26-point game was on national TV, as were 6 of his top 8 assist games. In 2010, Rondo’s top two rebounding games, 13 and 11, both came in, yep, national TV games. And in 2009, his 32-point destruction of Steve Nash, which was his career-high until two weeks ago, was a Sunday afternoon ABC game.” Also: You should see just how he turns up his roller-skating when the pressure is on!

The Rumors: The Rondo-for-Chris Paul chatter was heard loud and clear, with the word being that Ainge was on the hunt for a third team to make the trade palatable for the Hornets. Meanwhile, Yahoo! reported that the Pacers were interested in Rondo, and that “[t]he Celtics have been gauging Rondo’s trade value for more than a year, and have held discussions with teams about him across the past few trade deadlines and NBA drafts. There have long been divides within Boston’s front office, coaching staff and locker room about Rondo. He can be moody, difficult and stubborn.” Later, Ainge denied the reports with one of his classic should-sound-definitive-but-somehow-doesn’t-at-all comments: “Rondo will be fine. Rondo knows that we love him. He knows that we like him.”

The Reaction: Because of the NBA lockout, it’d be several weeks before Rondo could respond on the court. But when he did — in the first game of the season against the Knicks on Christmas Day — it was another valiant effort: In a Celtics loss (Paul Pierce wasn’t back in the lineup yet), Rondo tallied 31 points, 13 assists, five steals, and five rebounds.

One more thing: In late November Broussard tweeted that after last year’s playoffs, “Boston offered Rondo & Jeff Green to OKC for Westbrook & KPerkins after last season’s playoffs. OKC was not interested, sources say.” Because there’s no clear indication as to when Rondo heard about this proposed trade, I like to pretend that it was five minutes before he laced ’em up for the State Farm Big Blue All-Stars Tour, and that he responded to those trade rumors doing this:

The Rumors: OK, so this particular entry has nothing to do with trade rumors, but bear with me for a minute. Last February, Rondo’s pal Kendrick Perkins — remember, they were the two young guys starting alongside the Hall of Fame Big Three — was traded to the Oklahoma City Thunder. The move broke up the starting five that had won a title in 2008, and shocked fans; it’s probably fair to assume that Perkins’s teammates didn’t really see it coming, either. So, yes, this time we’re talking about the effect not of trade rumors on young Rondo, but rather the controversial trading of his center. How would Rajon — who, and I really don’t know if anyone has ever mentioned this to you before, can just be kind of moody sometimes — handle it?

The Reaction: Not well! The next game after the trade, the Celts played the Clippers, and Rondo had 11 assists alongside seven turnovers. Also, in 34 minutes, he only shot the ball twice. It was a harbinger of the rest of the season. Sporting News reports: “Before the trade, Rondo averaged 10.8 points on 50.9 percent shooting, with 12.3 assists. After, he was down to 9.8 points on 41.6 percent shooting, with 9.2 assists.” Some troubles, it turns out, Rondo’s not so great at playing through.

The Rumors: Rondo and Ray Allen to the Pistons for Richard Hamilton, Tayshaun Prince, and Rodney Stuckey. Said Yahoo!: “Boston general manager Danny Ainge and Detroit’s Joe Dumars never spoke, but rather the Celtics had a lower-level executive make the pitch to a Pistons official over the past weekend, league sources said. Detroit immediately rejected the idea, and it never advanced to the two top executives speaking about particulars.” But that’s not all! Also on the table at various points that summer was a trade with Brian Scalabrine to Memphis for Rudy Gay, Mike Conley, and the no. 2 pick, and another to Phoenix, with Allen again, for Amar’e Stoudemire, Leandro Barbosa, and the no. 14 pick. And, of course, there were those familiar concerns over whether Rondo was, you know, a dick. According to ESPN: “There were maturity issues. Rondo called a team meeting late in the season which was destined to backfire from the outset. It did … Rondo can be high maintenance or, as his agent prefers to say, ‘he’s complicated.’”

The Response: Again, Rondo had to wait a while until actually getting on the court. Once he did, in the season opener against the Cavs, he had himself a stellar, if unspectacular, Rondo performance: 4-of-8 shooting for eight points, 10 assists, six rebounds, and three steals. And Boston did win, shutting down the then newly minted Shaq-and-LeBron show in its first outing. But, as the Sporting News speculated, that summer’s grip of trade talks might have had less to do with spurring on-court performance as it did with bringing Rondo’s price down. That offseason, Rajon was negotiating his extension, which ended up being the highly reasonable $55 million for five years.

And here’s more grist for the “Ainge drops Rondo trade talk the way Leonardo DiCaprio incepts rich guys” point of view: If Danny wanted to trade Rajon now, he could, thanks to that insane triple-double — after an insane triple-double just maybe spurred by trade talks in the first place — do it with the young man’s resale value at a marked high. [Bwaaaaahng.]

All Dollars and No Sense in the NFL