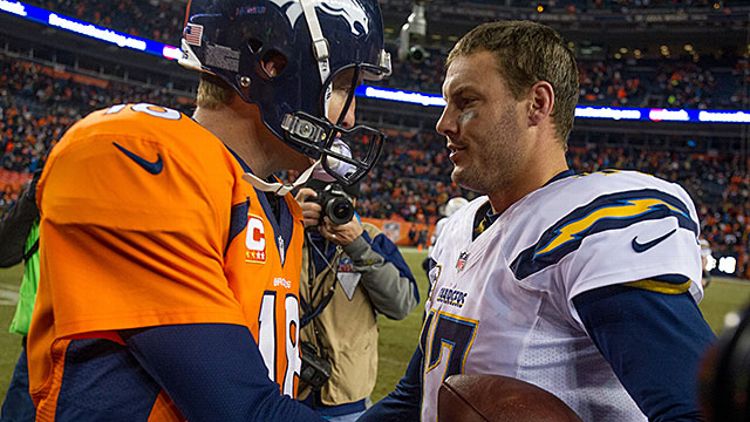 Three of this weekend’s divisional-round playoff games are matchups we’ve already seen at least once this season. We went back and watched the first installment of all three to see what lessons might be learned before getting to Round 2.

1. The Panthers and 49ers Can Play Some Defense

This isn’t really news, considering the first meeting was a 10-9 Carolina win, but the Panthers’ performance in that game was somehow more impressive than just giving up single-digit points.

The Niners kicked all three of its field goals in the first half, and although the first one came after a very nice early drive, they needed help from their defense and special teams for the other two. A recovery of a muffed punt and an interception gave San Francisco two short fields, and all it could muster was six points. Carolina allowed just 151 total yards on the day, for an average of 2.9 yards per play. That doesn’t even seem possible.

San Francisco couldn’t manage anything in the air, and Colin Kaepernick had his worst game to date as a pro. Vernon Davis leaving with a concussion halfway through the second quarter certainly didn’t help, and the Niners also missed Michael Crabtree (whom they will have this weekend). But even without both of them, it’s hard to discount the performance Carolina put on. This is one of the most talented and best-coached defenses in football, as evidenced by how ineffective any designed run was for Kaepernick. Choosing one standout play from Greg Hardy in this game wasn’t easy, but with 10:41 left in the third quarter, he managed to simultaneously play both the running back and quarterback on a read-option play that ended with him dragging down Kaepernick for a five-yard loss. Kaepernick made the right call and still got yanked down in the backfield. There’s not much anyone can do about that.

San Francisco had its own impressive defensive showing, but Carolina’s struggles were also somewhat self-inflicted. The Panthers dropped at least six passes in this game, and there were plenty of instances where Newton had receivers running open downfield. Steve Smith and Greg Olsen joined usual suspects Tedd Ginn and Brandon LaFell in putting balls on the turf, and Carolina struggled to keep drives moving as a result. Luckily for Ginn, he redeemed himself with a punt return that set up the game-winning field goal.

The play of the day for Carolina came on a beautifully designed run for DeAngelo Williams — the sort of schematic overture that was necessary to produce points in this one. It was one of those plays where all the window dressing means very little and everything at the same time. With Ginn motioning behind Newton into the pistol, it looked like the initial mesh with Williams was the start of a triple-option. But as two Carolina lineman pulled, it was clear that no one was being read. It was a power run from the start, and it was run to perfection. Still, it was one of the only big plays Carolina could manage all game, and right now, with Aldon Smith playing well and the 49ers annihilating opposing running games, it may be even tougher to spark something offensively.

3. Even the Seahawks’ Other Guys Are Better Than Yours

In a lot of ways, Seattle’s huge 34-7 win over New Orleans earlier this year was the perfect Seattle performance, and that starts with the role players it has on defense. Richard Sherman and Earl Thomas are headed to the Pro Bowl for as long as there’s a Pro Bowl, but what makes the Seattle defense so terrifying (first in both pass-defense DVOA and defensive DVOA, by a lot) is the talent it has all over it.

Brandon Mebane is one of the best interior defensive linemen in football, but his name is rarely mentioned alongside his standout teammates. He started this game by dropping Pierre Thomas four yards in the backfield. Cliff Avril followed that with a strip sack of Drew Brees that Michael Bennett — also having a Pro Bowl–caliber season — took back for a touchdown. Add all that to the game K.J. Wright had in coverage, and it’s easy to see why no one is moving the ball against this team. Their stars are better than yours, sure — but the players they have filling out their defense are better than your stars, too.

Seattle’s defense takes away space, turning perfect throws into negligible plays. The Monday-night clash against the Saints saw a beautiful Drew Brees throw to Jimmy Graham down the sideline in the first quarter end with Graham taking a shoulder pad to the ribs and coughing up an incompletion. And every time Darren Sproles or Pierre Thomas caught the ball in the open field, it seemed like Wright was there to drag him down immediately.

The Saints gained just 188 total yards that night, their fewest in more than a decade, according to ESPN Stats & Information. Brees was just 9-of-18 for 42 yards on passes outside the numbers — an area of the field that Seattle defended better than anyone this season. Richard Sherman can take a lot of the credit for that. He somehow led the league in interceptions while also being the league’s least-targeted cornerback. It’s unclear how that can happen.

It’s easy to remember the Saints-Seahawks game as a blowout from the start, but like any loss that gets away from a team, a few small plays made the difference for Seattle. At the end of the second half, trailing 20-7, Brees threw an incomplete pass to backup tight end Josh Hill on third down. It wasn’t an easy catch to make — a back-shoulder throw away from Hill’s body — but it was the sort of play a team needs against the best pass defense in football. The Saints ended up having to punt, and on the ensuing possession, Russell Wilson completed a similar third-down, back-shoulder throw to Jermaine Kearse to sustain a Seahawks drive. Behind a few smart keeps and scrambles by Wilson, Seattle drove down and punched in another touchdown just before the half.

Singling out Wilson’s best performance of the year isn’t easy, but the game against New Orleans deserves consideration. His numbers were great — 22-of-30 for 310 yards and three touchdowns — but it was the smaller plays that showed off just what Wilson adds to an offense. It’s difficult for a quarterback asked to run as much as Wilson is to be effective on a high percentage of those runs, but he manages. There seems to be a purpose to each, so that taking off never feels like a crutch. His ability to extend plays and drives with his legs while also having his best passing day of the season against one of the best pass defenses in football made this his best game of the year.

5. The Chargers Have a Plan

What was most impressive about San Diego’s win over the Bengals last week was that the Chargers knew exactly how they wanted to make it happen. Their game plan was evident in every stage, and it paid off. Their Week 15 win against the Broncos went the same way.

San Diego’s defense survived this year in part because it spent so little time on the field. The Chargers were a middling team in points allowed while finishing last in defensive DVOA because they faced fewer drives than any other team in the league. That was possible because no one did a better job of sustaining their own offensive drives than the Chargers. According to ESPN Stats & Information, San Diego ranked first in just about every ball-control category that exists: time of possession, third down percentage, lowest percentage of drives without a first down, plays per drive, and yards per drive.

Back in Week 15, San Diego extended that plan about as far as it would go. It held the ball for almost 39 minutes, compared to Denver’s 21:11. Philip Rivers attempted just 20 passes, which meant a very healthy diet of Ryan Mathews, who ran for 127 yards on his 29 carries. It was the first 100-yard rusher Denver had given up all year, in part because few teams have the option of running the ball all game against the Broncos’ offense. Mathews was on the sideline for most of the second half against Cincinnati, but the Chargers are going to need him this weekend.

Defensively, the Chargers’ plan against Cincinnati involved a lot of varied fronts and blitzes, and that figures to be the case against the Broncos as well. When Peyton Manning was given time, he had receivers running wide open down the field all game. Whatever success the Chargers did have defensively was the result of blitzes that came from many directions. They managed a sack, a hit, and an interception on Manning, and it would be a surprise if they weren’t sending everyone from inside linebackers to slot cornerbacks at him this weekend.

Chelsea Are Playing Like Chelsea Again, and the Premier League Should Be Very Afraid