Chelsea Are Playing Like Chelsea Again, and the Premier League Should Be Very Afraid 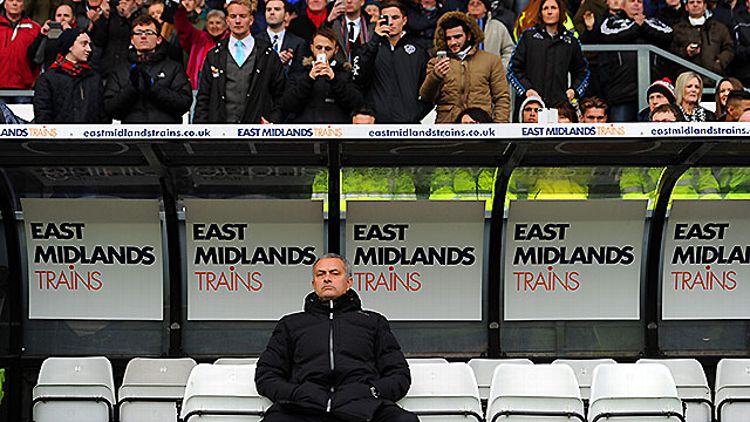 Jose Mourinho warned us. He told us this was coming. Ahead of Chelsea’s pre-Christmas clash with fellow title contenders Arsenal, Mourinho just came right out and said it.

If I want to win 1-0, I think I can. One of the easiest things in football is to win 1-0. It’s not so difficult. You structure your team from the back, you organise your team from the defensive idea, you don’t give freedom to your players to express themselves. The dynamic of the team is defensive and what you do is you recover the ball and try to punish the opponent on the counter-attack.

The quote was delivered after an atypical run of games for a Mourinho team during which Chelsea gave up leads in three consecutive matches, against Premier League strugglers Sunderland, Stoke, and Crystal Palace (of course, Mourinho being Mourinho and Chelsea being Chelsea, they still managed to win two of those three). It’s also not a coincidence that Mourinho started waxing philosophic about brute-force football before a particularly grueling stretch of four games in 10 days against what were at the time top-half-of-the-table teams, including title contenders Arsenal and (being slightly generous) Liverpool.

And while Mourinho did go on to say that he didn’t want to play that way, it certainly seems we’ve got ourselves a “he doth protest too much” situation on our hands, because everything about Chelsea over the past two weeks, including their stellar record of 10 points and only one goal conceded in four games, screams ruthlessly efficient, defensive-minded football.

Chelsea’s modus operandi during the so-called festive period seems to have been this: Merry effing Christmas, enjoy a kick to the shins from us. They were already a pretty rough team, fouling the sixth-most in the league at 11.5 times per game over the first 16 games of the season (all stats courtesy of ESPN Stats & Info), but over the last four games they’ve jacked that up to 13 per game, good for third. With an approach like that, it’s no wonder that Arsenal and Liverpool ended up feeling like Chelsea got away with football murder.

It wasn’t just a healthy enjoyment of kicking people that led to those fouls. Over the last two weeks, Chelsea saw much less of the ball than they normally do. Their four opponents — Arsenal, Swansea, Liverpool, and Southampton — are fourth, first, eighth, and second, respectively, in possession. Chelsea at 54.9 percent are ninth. Chelsea lost the possession battle in three out of their four matches, barely nipping it against Liverpool with 52 percent, which is still below their season average. (Possession stats are all according to whoscored.com.)

So, of course, Chelsea fouled more over the last four games. That’s what happens when you’re defending for a longer portion of the game than normal. They also had significantly fewer touches per game than they had previously averaged (574.8 vs. 690.9), fewer shots (13.5 vs. 17.1), and fewer passes attempted (449.3 vs. 571.5). Those are all effects of having the ball less, which, given their opponents, was a completely reasonable expectation.

By this point in the season, we all know the strengths and weaknesses of this particular Chelsea squad. They are extremely thin in central midfield, and they have strikers that can’t hit the broad side of a barn. Despite that, they’ve still scored 38 goals, behind only the mighty Manchester City, Liverpool, and Arsenal. Through 16 games, there was absolutely nothing about Chelsea that would lead anybody, including Mourinho, to believe they could out-pass, out-possess, and out-create teams like Arsenal and Liverpool. (Southampton and Swansea are both cases of teams with extremely unique stylistic quirks that result in lots of possession, but somewhat less dangerous attacks.) The general destruction Chelsea hath wrought on the rhythm and flow of the last four games aren’t so much a sea change in Mourinho’s approach; rather, it’s exactly what you’d expect when Chelsea, as currently constituted, faces off against sides that want to keep and pass the ball. It’s a trade-off, and one that was particularly clear against Arsenal and Liverpool. Go ahead, have the ball; good luck getting your shots off, though. Arsenal, who averages 14.8 shots with 5.5 on target, had seven and one; Liverpool, who averages 17.1 and 6.5, had eight and four.

This isn’t to be read as a slight against Mourinho and Chelsea. Chelsea are an extremely good defensive team despite their little hiccup right before the holiday stretch. No team has conceded fewer shots on target than Chelsea’s 60, and only Arsenal have allowed fewer goals, with 18 to Chelsea’s 19. They’ve done that all without starting a true natural defensive midfielder, having a back line anchored by 33-year-old John Terry, and with left back duties shared by 33-year-old Ashley Cole and natural right back Cesar Azpilicueta. Despite all that, Chelsea might be the most formidable defensive team in the Premier League.

The genius of Mourinho isn’t simply in building his defense, it’s in convincing the world that Chelsea are relying on it, not out of necessity, but out of choice. Chelsea didn’t foul more and possess the ball less because Mourinho decided to flip a switch. They did it to restrict the shooting chances of good teams by sacrificing possession. In effect, their opponents forced them to play defensively for low-scoring wins, which is exactly what the coach expected. But, by getting out in front of the narrative, Mourinho changed the focus of the story.

By making his decree, The Special One, as he always seems to do, made the story about him. Depending on your view, that’s either a wise move to shield his team from the potential pressures of a difficult four-game stretch, or it’s the compulsive spotlight grab of an egomaniacal manager, desperate to be the center of attention. Or both. Regardless, all he did was tell us that going forward, Chelsea would play like Chelsea.