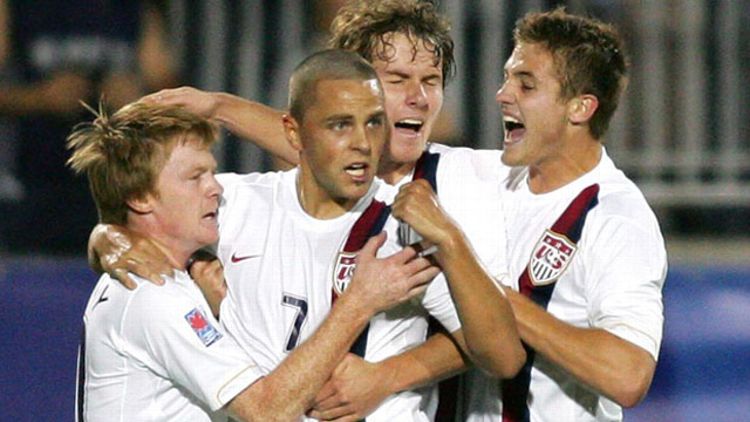 There was a poignant, historic photo on MLS’s website a few weeks ago. Pictured were four young U.S. U-20 internationals, celebrating after one of their number had scored. On the left of the picture is a young Dax McCarty. Behind him, virtually unrecognizable with a shock of hair, is Michael Bradley (who currently plays in midfield for AS Roma), still at that point very much in the shadow of his father, Bob, and yet to make doubters eat their words about nepotism. To the right is a grinning Robbie Rogers, also a long way shy of the story line that will define his career.

One might have thought MLS were running the photo to illustrate Rogers’s topical return to active soccer duty. But in fact the photo’s true subject is right at the center of it — the goal scorer, Danny Szetela, bearing an expression that suggests this is the most natural thing in the world for him. If you had to guess from the image which of these players would today be trying to find his way back from a soccer wilderness, he’d probably be the last one you’d name, so determined does he look — so certain of his future.

Yet, after nearly three years away from the game, and following painful and complicated surgeries that cost him his last pro contract at D.C. United, Szetela is trying to beat the odds to return to the professional game. His unlikely route back has seen him training with, and then playing for, family friend Greg Bajek’s amateur team, Icon FC, in Montville, New Jersey. Along the way Szetela has found himself on a U.S. Open Cup run with Icon.

“When you’re not able to play you just see how much you miss the game,” says Szetela. “My career could have been over because of this injury. I guess there were times when I was depressed; I could lose my entire life. But I stayed positive and just kept doing what I was born to do.”

It’s late May, and having beaten Brooklyn Italians in the first round, Icon have just negotiated a long car trip by convoy (they weren’t able to book a bus in time) to Richmond, Virginia, to play the USL Pro side Richmond Kickers. The Kickers represent formidable opposition. Coach Leigh Cowlishaw has taken them to the quarterfinals of the cup four times. In 2011 the Kickers beat five MLS sides en route to the semifinals. In 2011 Icon FC barely existed. Bajek set them up in 2010 as a means of showcasing talented players in North Jersey, to help them find professional contracts. “I started a little situation where I tried to help players go overseas because there’s nothing here,” says Bajek. “It’s very political.”

A group of individuals jostling to showcase themselves — it sounds like the antithesis of a team. But the garrulous Bajek works hard to ensure loyalty and continuity. “I have one player who played for me four years ago in an exhibition who’s coming back to me now from the Ecuador first division, because he’s getting his citizenship and wants to go overseas now. I’m not their friend, but I try to be their mentor. You get people coming back, like college alumni almost.” This year he benefited from this approach when a core group of players returned from a tour in Poland and stuck together to build a decent team. They topped their local Garden State Soccer League division, and went through the U.S. Open Cup qualifying process, which saw Icon FC face the Brooklyn Italians and easily beat them, 4-1, in the first round of the cup.

I ask Bajek about how Szetela became involved. “His father used to come to games I played in when Danny was a little boy. And I try to give back to Danny. We trained down the street from where he lives. So he got involved with us. It gives him the opportunity to be seen now as a coming-out party for him. It’s actually a rewarding situation when a kid hasn’t played in three years, and he’s inspiring these young kids around him — and he’s young himself, he’s not an old guy. His career started straight out of high school — this is his second wind.”

As I settle into the press box at City Stadium in Richmond, the only wind is a loud and only partly effective air conditioner at the other end of the room. The box windows are closed, and when I look down on the field the overall effect is curiously distancing, not least because of the huge bank of seats opposite are entirely empty. As Shelley Sowers, the Kickers’ general manager explains: “We never use that part. This is a city-owned stadium. There have been big games here in the past — national team games, but we don’t really need it.”

Certainly not tonight. The Kickers have a minimum ambition each season of bringing at least one MLS team to the stadium, but Icon FC are hardly a draw. A tidy-enough crowd is milling around in the seats immediately beneath us, though, with several replica jerseys on view and even a drummer or two — whom the rest of the fans cheerfully indulge even as they keep them at a suitable distance.

As the game kicks off, Richmond press early but are caught on a counter by Icon FC — striker Argjent Duka picking up where he left off with his hat trick in the previous round, as he pokes the ball beneath Richmond’s keeper. Icon look lively in the opening exchanges and are clearly trying to attack. Bajek described his coaching philosophy to me earlier. “I played midfield, a central midfielder, so I look for players who are creative in all positions, because if you’re a creator you can get out of anything.”

By the time Danny Szetela makes his first significant contribution of the game, spinning away from three defenders to spray a ball out wide into space, Richmond are already level, having passed through the Icon defense moments after the goal. Bajek is hunched, unmoving, on his bench.

Richmond are rarely in trouble after that. They take the lead on a penalty just as I wander down to field level to take some photos and listen to the crowd. An Icon player goes down injured and their players take the chance to grab some water, cueing a derisive chorus of “There’s no water breaks at this level!,” “Time out for Icon!,” “Hey, break out the orange slices!” Orange slices, it seems, being the scarlet letter of AYSO shame.

Bajek ignores the taunts and tries to rally his team. While Icon try to play in a pleasing technical fashion — showcasing the individual, perhaps — it is the fundamentals of fitness and pattern repetition that undoes them over the course of the game. Their part-time players are as dedicated as time allows — training three times a week regardless of the weather. (Bajek: “If it snows I tell them to bring a shovel.”) But they also have jobs, families, demands on their time beyond the game. As Yazo will later tell me, as he walks slowly off the field drenched in sweat, he has taken a job at a local soccer store that allows him to train.

The team’s different circumstances become telling. As the game goes on, the visible 30-yard difference between kicked clearances by D.C. United loanee Andrew Dykstra, in the Richmond goal, and Chris Duggan in the Icon goal, take on the metaphorical quality of respective energy bars in a two-player video game.

Szetela is working willingly in the middle of the park, and there are sporadic individual moments of inspiration around him, but team moves are breaking down. As Icon tire, Richmond add two more goals in the second half, and while the visitors aren’t disgraced, they are handily beaten. Somewhat symbolically the floodlights at their end of the field are switched off within minutes of the final whistle and the last stragglers of their team, including Szetela, drift off in darkness toward their locker room.

As they retreat I think again of that photo of young U.S. players with their futures ahead of them. That coming weekend I will be watching McCarty back in action at Red Bull Arena, and writing about Robbie Rogers’s historical appearance for the Galaxy. I’ll be discussing the forthcoming World Cup qualifiers, and the importance of Bradley, with colleagues at Yankee Stadium. Meanwhile, in North Jersey, Bajek will be working out which of his players he still has with him to play this summer’s European showcase games, and Szetela will be facing the future again, with a little less certainty but no less determination. (“Honestly, if we’d had the chance to train at the same level as the professionals — the difference in this game was fitness.”) In the coming days he’ll take his comeback campaign to the New York Cosmos preseason training camp. Don’t write him off. For Icon though, the cup run is over.