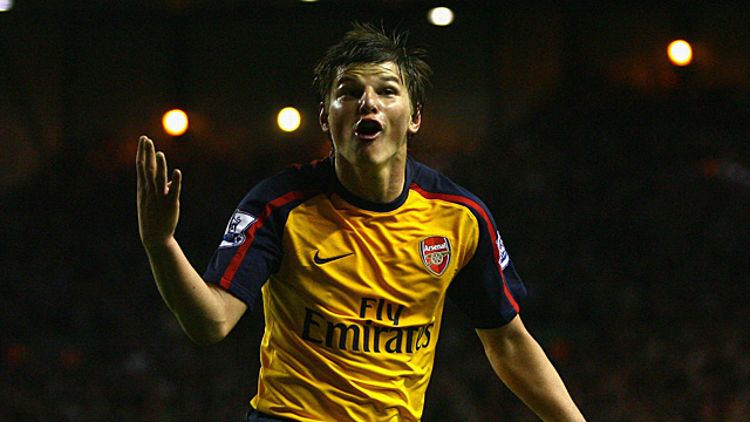 Seven appearances. Zero goals. Zero shots on target. As many yellow cards as assists (one each). All in eighty-six minutes played. That’s a joylessly appropriate number for a player who was a ghost of his former self, but 86 is not even an entire match worth of minutes.

For someone who came over as his club’s most expensive acquisition at the time, the league stat line for Andrey Arshavin’s final season at Arsenal reads like a gallimaufry of suck. Those kind of numbers don’t merit a glowing good-bye, they merit a, “Who? Oh yeah, that guy.” But the release of Arshavin by Arsenal when his contract expires at the end of the month is kind of a bummer.

He was everything an Arsene Wenger import hadn’t been for a while. He was (a) not cheap, and (b) a January signing. He was also Russian. Save for Ukrainian Oleg Luzhny around the turn of the aughts, Arsenal hadn’t had any players from the former Soviet states.

Moreover, he had these strange Q&As on his website where he would talk about everything from his stance on prenuptial agreements (against) to coffee (he doesn’t drink it at all). His terse answers revealed something of a deceptively sparse ontology. Maybe he was just bad at English, but they read as if he communicated mostly in koans.

From 666666: Hi Andrey! Please tell me, in your opinion, what is the most important thing for a footballer these days?

Arshavin: I think the most important thing is a head, not only for a footballer but for any person.

It’s ridiculous and painful to look at the team sheets now and remember that when Arshavin showed up, he was almost a luxury. This was a side with options of Robin Van Persie, Emmanuel Adebayor, Nicklas Bendtner, and Eduardo, playing in front of Cesc Fabregas (come back, please), Theo Walcott, and Samir Nasri. Then roughly two months into Arshavin’s tenure, Arsenal went to Liverpool and, dearest god, he authored what should have been Chapter 1 in The Legend of the Magic Pixie.

Instead, time will probably reduce the story to a single entry, maybe even just one image — that of him holding up four fingers in front of his O-face as he raced to celebrate with the visiting fans at Anfield. Everyone who’s not from Liverpool has probably forgotten that Arsenal were thoroughly outplayed that day and it was Liverpool who needed a stoppage time goal from Yossi Benayoun just to rescue a point.

Arsenal managed just four shots on target. All four were from Arshavin, and all four were goals. Even if three were the result of lower league defending, the second made you feel vindicated as a know-it-all fan. “See what happens when you spend money, you French tightwad?”

Arshavin’s career goal tally at Arsenal seems abysmally tiny; just 31 total in all competitions. He didn’t merit backhanded compliments like “mercurial,” he was just frustrating. He should have been better. And it’s sad that he wasn’t.

But he was fine in the cup games he played in. In fact, in Arsenal’s comeback from down 4-0 against Reading, Arshavin was maybe the best player on the pitch; certainly the best player not to score. He tallied three assists, including a beauty of a through ball to spring Walcott for the first Arsenal goal and the catalyst for the comeback. He also logged all 120 minutes. Not bad for a fat, lazy bastard (actually not possible for a fat, lazy bastard).

Work rate is the domain of the cult hero. It has overinflated value for you and me and people who knew they were never big, fast, or talented enough but still harbored some inexplicable belief that if we had just worked harder we could have been a professional athlete. It’s a myth — a lie we believe — but it’s why people love the Dirk Kuyts of the world.

Arshavin might not have been the most industrious player — I think there was some blame placed on him for once costing Arsenal a match against either United or maybe Barcelona because he didn’t track back (never mind that the left back was nowhere to be found) — but running more than your opponent isn’t a necessary condition for being really good at football.

As for being played out of position, that’s nothing I’ve ever read Arshavin himself complain about. Wenger has made a small habit of dabbling in players who thrive centrally, then moving them out to the wings. The same is true on the current squad for Podolski and Oxlade-Chamberlain. Maybe Wenger aspires to someday field a team in a 4-2-1-1-1-1. It would help explain the two most high-profile rumors attached to the club this transfer season (Rooney, Fellaini).

Playing in a central position for Russia, Arshavin almost single-handedly eliminated the Dutch at the Euro 2008. Maybe he should have played that position for Arsenal, but that’s not why his stint in North London dwindled to nothingness. That happened because he gave up. And given the circumstances, I kind of understand why he did.

This whole notion that Arsenal have no ambition beyond finishing fourth in the league is absolute crap. Wenger awoke the morning of February 27, 2011 — just a bit over two years ago — with a squad that had a shot at the quadruple. They were playing in the Carling Cup final that day, they were second in the league, they were about to move to the quarterfinals of the FA Cup, and they held a 2-1 lead over Barcelona after the first leg of their Champions League knockout tie.

Of course, a bizarre defensive gaffe cost them the Carling Cup, then they lost to both United in the FA Cup and Barça in the Champions League. They were out of three competitions inside of two weeks and have been treading water since.

Most casual observers finger the Szczesny-Koscielny Carling Cup mistake as the moment — OK, the most recent moment — when things went wrong for Arsenal (in fact, the lead comment on that YouTube link is “went downhill from here that season”), but that was just a weird one-off cosmic aberration. And Arsenal did it to themselves.

Where it really went wrong was the following weekend. At home, against Sunderland. With the match still scoreless in the 80th minute, Arshavin got played through by Samir Nasri. After getting past Titus Bramble, right as Arshavin was about to unload on goal, Bramble lunged forward and put both hands into Arshavin’s back.

It is the Platonic form of a penalty. On Day 1 of ref school, it could be the instructional video shown for the line in the syllabus that reads: “Stone-Cold Penalties That You Should Never Not Call.” There is half a second where it looks like Arshavin might actually start crying when he doesn’t get the call. It’s like watching video of the Krusty Anniversary Special with Bart. “You can actually pinpoint the second when his heart rips in half.” Only it’s not just the second (17); you can pinpoint the exact frame (14).

Minutes later, as the clock is winding toward the 90th, Arshavin is again played through. This time he scores, only for a late offside flag to go up. But he wasn’t off. Not even close. A penalty not given and a legit goal taken away. Both from Arshavin, both in the last 10 minutes of the match. Arsenal and Sunderland drew 0-0.

At that point, Arsenal had only pissed away the Carling Cup. They had a midweek FA Cup walkover against Leyton Orient. Getting a win against Sunderland would have put things firmly back on track. More importantly, they would have moved to just a point behind United, second in the league with a game still in hand. Instead they went on to lose to Barça (still an unbelievable call) and then United, and drew four of their next five league matches before losing to Bolton.

Inside of two weeks they were out of not three but all four competitions.

Arsenal hasn’t been the same after drawing with Sunderland. And after being denied a penalty and having a legit goal taken away, neither was Arshavin. That’s not to say he consciously quit, but watch the video of the Bramble shove above if you skipped it. That’s a man whose job breaks his spirit. “Give up” is poor locution. How can you fault someone who gets his soul crushed through no fault of his own?

Arshavin was never even marginally threatening on the pitch after that. He played in every one of the remaining 12 matches that season and only scored once. He had scored twice in the previous month, including the match winner against Barcelona in the first leg, as well as assisting on the lone Carling Cup goal. Not exactly on fire, but he went from scoring a respectable 15 in 55 league matches before Sunderland to 2 in the next 38. He went from in form, to getting screwed, to not scoring, to the bench, to a loan spell back in Russia, to often not making the team sheet, to possibly retiring.

He leaves London empty-handed; his nice parting gift is that he maybe picked up a model (wonder if he changed his stance on prenups).

In between all the strange existentialism of his Q&As, he was telling the story of his time in London. He saw how the pieces fit together. He was just cryptic in revealing what he knew.

From Kebes: Have you ever felt like hitting a referee?
Arshavin: Sometimes.

From vanilja: Good afternoon, A gypsum hippopotamus in Zenit uniform (almost in human size) has been installed in the playground near our house today. Can I tell my kid that its name is Andrey? In your honor?

Arshavin: Hippo? If it pleases your child, then feel free to do this, although I thought I was way slimmer then a hippo. :)))

From andyBafc: Andrey, are you frightened of bears?

When you filter out the noise, it’s easy to put it all together: Yes, we were robbed against Sunderland and I should have punched referee Anthony Taylor. No, I’m not fat and lazy. And I like bears, which is important because eventually I will be heading back to Russia.

Do svidaniya, Magic Pixie. Arsenal fans will carry a warm nostalgia for the player you never were. Well, save for that one game.