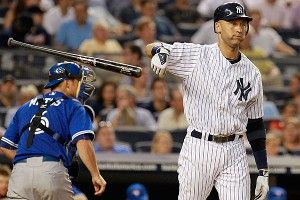 Now that the All-Star Game is in the rearview mirror, I guess it’s safe to tell the truth: Any player who’s already been to more than one of those things would rather have a couple extra days of vacation than have to show up for it. Except me, naturally — it’s always a huge honor to be selected and to play alongside the best in the league, especially now that we’re out there battling for home-field advantage. I’m not going to be one of those ingrates who complains about how he could be in St. Barts, or Bora Bora, or recharging his batteries at his 30,000-square-foot compound in Florida. Playing baseball for a living is a blessing, and it would be crazy not to appreciate every single bonus moment of competition you’re lucky enough to have the fans impose on you while most of your teammates were left home to nurse their sore hammies or strained obliques so that they can come out of the gate strong for the second half. You have to savor those extra innings you’re asked to play in the sweltering mid-July heat, for a manager you’re probably going to face for the pennant. It’s a great gift every time. Especially when you’re a veteran who doesn’t know how many more chances you might get to re-experience something you’ve done 13 or so times before.

Needless to say, I got out of Kansas City immediately after the final out. And on the plane ride home, while I was icing my knees, I did some reflecting on the season so far. Yes, we finished the first half in first place in the division, the best record in baseball, and a seven-game lead in the toughest division in baseball, but that’s not quite good enough. The papers are right: We’re old, we’re too reliant on homers for our runs, we haven’t done a great job hitting with runners in scoring position, and you’re always going to be a little nervous about our starting pitching with Phil Hughes and Ivan Nova in the rotation and CC and Pettitte hurt. Some mystery player named Jayson Nix keeps finding his way into the lineup. We did NOT finish with an 85-0 record at the break, which is always the target we set for the team in spring training. The media is right to point this out every day — it keeps us relentlessly focused on winning, though it would be hard to miss the giant “162 Wins and a World Series or We Kill Ourselves” banner I personally hang in the clubhouse every April. It’s important to have fundamentally unattainable goals so that if you fall short of them, you still wind up fulfilling some lesser-driven person’s twisted idea of success.

In the spirit of reflection, I decided it would be a useful exercise to spend parts of these off days to evaluate the team in various areas, which I’ll share with the guys when we’re back:

The Infield: Not good enough.

The Outfield: Not good enough.

The Starting Rotation: You get queasy spending any time thinking about it.

The Bullpen: Has let inherited base runners score at above a 0 percent rate; could be much, much better.

The Bench: If they were good enough, they’d be starting.

The Manager: Really has his work cut out for him.

The Captain: Doing his best with the tough hand he’s been dealt.

Some of this may seem a little negative when I read it aloud in front of the team before Friday’s game. But they’ll understand where I’m coming from, especially when I point to the banner, say, “Let’s at least get a championship and salvage a small part of this imperfect season,” and then go around the locker room placing a single drop of champagne from a turkey baster on each of their tongues, just so they know what winning it all will taste like.

It all begins again tomorrow. We’ll be ready.

The more superstitious guys on the team get worried about playing on Friday the 13th, no matter how many times I tell them nothing bad is going to happen. It’s not like they’re going to be murdered by a guy in a hockey mask. Yankee Stadium has been a no-machete zone since early in the Giuliani administration. “My only superstition is winning,” I tell them. When Swisher asks me what that means, I just walk away. Did Confucius spend all of his time explaining what was inside his fortune cookies? Of course he didn’t, he let people puzzle it out while they chewed. You can’t give them the answers, that’s not how a philosopher-captain is supposed to operate.

All in all, a nice comeback win tonight. Teixeira went deep twice. After the second homer, I tell him I really like Second-Half Tex. “What was wrong with First-Half Tex, Jetes?” I walk away. Just chew the cookie, man.

Weirdest thing before the game: I get to my locker and there’s a brand-new iPhone sitting in it. So I go to pick it up and it starts ringing.

Then he hangs up. The phone’s wallpaper is a photo of the two of us on the field in Kansas City. He looks pretty happy. He goes 3-for-5 against us, but we win anyway.

After the game, I’m back at my locker. There’s a text: “Thank you for teaching us about winning, Captain. — Mike.”

A-Rod popped up with the bases loaded in the ninth with two outs and the game on the line. You’ve all heard that story before.

New iPhone text waiting in my locker afterward: “Sorry about that. Wish u won. — Mike”

Right back: at least 35 of those emoticon things that look like happy faces.

I put the phone back in the locker. Across the clubhouse, a naked Alex holds his arms above his head while his cousin lightly mists him with Axe body spray. You don’t ever get used to that, even if you see it every day.

There’s not much in the game that’s more exciting than winning on a late-inning grand slam. Ibanez really saved us tonight. When he gets back to the dugout, I give him a double fist-bump and say, “Big hit, Raul,” but I pronounce it like “Paul.” “Ra-ool,” he says. Hey, I only see it written on a lineup card once every third day, I don’t know what it’s supposed to sound like. All you can do is take your chances saying things phonetically and hope it turns out OK. To his credit, he did seem appreciative that I made the effort after he went out of his way to correct me.

This was a really bad day for injuries around the league. Votto on the Reds needs knee surgery. Joey Bats blew up his wrist. Brett Gardner’s had another setback with the weird mystery forearm problem that’s kept him out all year — he might miss the whole season now. And David Ortiz hurt his heel jogging around the bases on Adrian Gonzalez’s homer. I saw video of that one: Papi is rounding second and suddenly he’s limping. I’m sure it was very painful, but as a player who prides himself on never revealing an injury until it’s a crippling situation you can’t hide anymore, you’d rather fake your own death than come up gimpy on a home run. Fall down and pretend you were shot by a sniper in the scoreboard, something. You can’t help but be embarrassed for a guy when he’s taken out by a trotting-related complication.

CC is back. He was sharp, and the Big Man got the job done. It makes you feel a little bit better about the rotation, even if for one night. Me and a couple of the guys had the clubbies fill up his Escalade with Cap’n Crunch. After he digs himself a tunnel to the driver’s seat, he’s going to have a good time with that on the ride home.

You’d think the big news tonight would be our big win against a team in our division, but all anyone wants to talk about is Jeremy Lin leaving the Knicks for Houston. As someone who’s played his entire career for a family-run organization for which money is no object when they’re trying to put the best possible team together, I just don’t get it. I’ve met Mr. Dolan a few times. He can afford to match the offer the Rockets made. He has a $14.5 million golf cart at his place in the Hamptons just to go from the main house to the pool house. One time I saw him throw a sack full of gold bars into the ocean on a dare from Isiah Thomas, and he didn’t think twice. You hate to comment on how another team in your city is run, but you have to assume he doesn’t care about winning, because if there’s one unbreakable rule in New York sports, it’s “pay your most popular player whatever he wants.” If you had asked Mr. Steinbrenner what his proudest moment was, he probably would’ve told you it was giving me that $189 million contract. You’ve never seen a guy look as happy as he did that day. He was all about winning, even when he completely lost his mind in the ’80s and tried to have Dave Winfield assassinated.

Oh, wait. Do you think Mr. Dolan is going to have Isiah kill J-Lin? I better text him right now and tell him to get out of town as quickly as possible. Then I’ll call Jay-Z — he’s probably so excited that every basketball fan in the city is switching to the Nets he’ll let Jeremy use his G6 to escape. Keep your head down until you get to Houston, kid. You’ll be safe there on the NBA’s Witness Protection team.