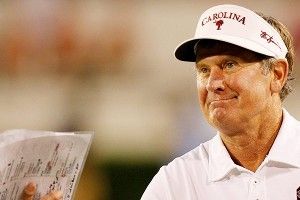 It’s nearing the end of July, and in the college football world, that can only mean one thing — MEDIA DAYS! The new-look SEC began its three-day run of podium sessions, awkward stand-up interviews, and catered turkey subs yesterday in Hoover, Alabama, and the first man up was none other than South Carolina head coach Steve Spurrier. The Ol’ Ball Coach brought his typical brand of down-home Southern charm, and because the SEC is the only conference that matters, we here at The Triangle figured we’d bring you yesterday’s five Spurriest moments as a way to dive back into college football.

“Our sports information guy, he said, ‘Coach, this is the first year since you’ve been at South Carolina you brought a quarterback to this media day.’ I said, ‘That’s right, isn’t it?’ Then somebody asked me how I selected my players to come. I said, ‘Well, we select them on, first of all, guys we think represent our university and our football program in a first-class manner, know how to talk to the media, what to say, so forth.’”

The Ball Coach on the growing interest in Gamecocks football

You know what, that is neat. It’s easy to forget sometimes just how big of a turnaround Spurrier has put together in Columbia. The Gamecocks aren’t only relevant, they’re fighting for the best players from all over the Eastern Seaboard, and they’ve dominated South Carolina as of late. Speaking of …

The Ball Coach on Shaq

“We’ve signed Mr. Football in the state of South Carolina last four years — Shaq Roland, a wide receiver this past year, is with us.”

I’m glad we’ve gotten to a place where college-age kids are named Shaq. I’m looking forward to 2025, when some quarterback named LeBron announces his college decision on national TV.

The Ball Coach on clapping

“In ’06, we lost a close one to Auburn. They sort of clapped as the guys left the field. So yeah, I said, ‘Please don’t do that again. Please don’t clap when you lose a game.’ There’s no moral victories in any sport.”

The Ball Coach on retirement

“Healthwise, I feel a lot better than I did last year. I have me a new knee. Had a knee replacement, four surgeries on my right knee. It was just worn out.

“Every time some sportswriter asks me how much longer I’m going to coach, I think I need to ask him, ‘How much longer are you going to write?’ What’s the difference?”