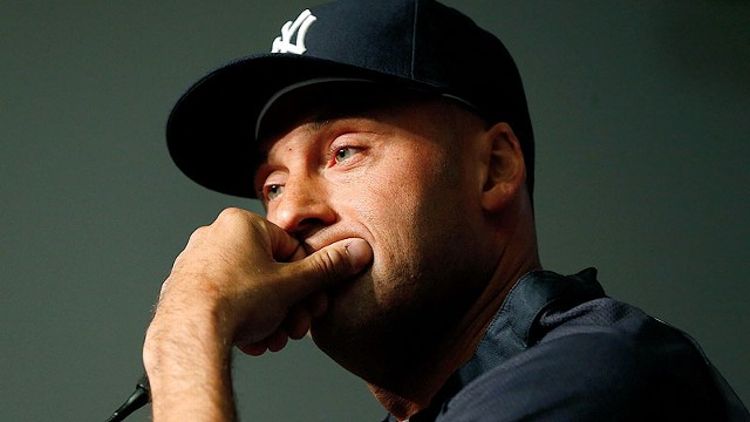 I don’t want to dwell on the game. It is what it is. Or was what it was. It didn’t go our way. I wasn’t there. That’s not an excuse — I still take full responsibility. It’s the Captain’s job to be there for his team, and even when he can’t be there physically, it’s his job to provide leadership and inspiration remotely. All you can do is individually text every guy on the roster with words of encouragement, or words of mysterious depth, or words of subtle intimidation. You have to know what motivates each player and press his particular buttons. There’s an art to it you learn over time. Not everybody’s a positive reinforcement guy. Some guys like the fist bump, the friendly tap on the top of the helmet. But some guys you’ve got to reach other ways, like showing them a photo of an empty locker in the Scranton clubhouse with their name on it, or by refusing to talk to them for an entire month because they missed a cutoff man. One time somebody woke up bound and gagged inside an equipment bag on the Grand Concourse sidewalk. No idea how that happened. As Captain you can’t officially endorse that kind of thing. But you also can’t help but notice he ran out his routine grounders for the rest of the season and never made much eye contact with you after that incident you definitely had nothing to do with.

I’ll finally be back with the team up in New York tomorrow. There’s a big press conference for me so I can update everyone on my status. You never want to come off too rehearsed at those things, but that doesn’t mean you shouldn’t spend an hour or so taking dry swings in your media cage, just to make sure you’re ready for anything they throw at you. You’d hate to accidentally say something you hadn’t already practiced in the simulation enough times to get it to that perfect sweet spot of respectful yet mildly dismissive. You’ve got to put the work in, just like with anything else.

Can’t wait to sit in the dugout with the guys, even if I’m not playing. It’s been way too long.

The press showed up. A part of you always hopes they’ll forget and you can just go straight to the game, but they never do. They’re pretty organized; you have to tip your cap to how well they do the showing-up aspect of their jobs.

So I told them I’ll be back on the field soon.

I told them that even though I’m laughing and smiling now that I’m up here with the guys, I’m still frustrated because I can’t play. I did not disclose how therapeutic ceramic work was helping me deal with that frustration, because it’s none of their business, quite frankly.

I told them that I have no doubt I’ll come back as the same player I’ve always been, even though I’ll probably be 39 when I get back. You can’t have any doubt about yourself. That’s when you’re in trouble. If you can lead the league in hits at 38 years old, you can do it at 39. Age is just a distracting number that makes your future unbelievable accomplishments look even more impressive.

I told them that I can’t make my ankle magically heal any more quickly than it’s already taking, even though I’ve looked into a variety of nontraditional and occult medical solutions. I’ll be back when it’s ready, and not a minute earlier. Trust me, if I could shave a week off my recovery time by eating a flaming eagle’s heart every day, I’d do it. It’s not on the league’s banned substances list. But the studies on that course of treatment are iffy at best and it’s not worth the risk of another setback that might come with contracting some kind of rare eagle cardiac flu.

I also told them I don’t have the MLB television package at home in Tampa. They were amazed. I mean, I don’t have the consumer package available to any fan. When you’ve spent seven figures constructing a state-of-the-art holographic replay stadium in your compound, you’re not ordering up Extra Innings on cable. Let them report what they want. It’s a competitive advantage if everyone thinks I’m not watching every game in three high-definition dimensions. You give me that edge and I’m going to take it.

You never want to make a big deal out of games in late April, but it’s nice to take the first two of a four-game series against the rival everyone says you’ll be battling for the division in September. It’s a nice tone-setter, especially considering we also took two out of three in Toronto last week. But it’s still important to remember it’s a very long season, and anything can happen. A Blue Jays team that added a Cy Young winner to their rotation and took huge advantage of a Miami fire sale can be in last place because of their owner’s terrible karma. The greatest franchise in the history of sports can be considered a huge underdog because a rash of freak injuries has forced them to start non-All-Star-level players at multiple positions. The Boston Red Sox can have the best record in baseball in the first month because of pure randomness. It’s a crazy game. It’s strange to think about how you’re sitting in the dugout, watching it all happen, but in October, you’ll be out there on the field in the World Series, making it happen. It’s humbling.

They moved me to the 60-day DL today. It was only an administrative thing to clear room on the roster after Francisco Cervelli and Ivan Nova went down yesterday, but it still stings because it reminds you just how far away you are from getting back out in the field, even though you seem so close because you’re here in the dugout. Sixty is a big number. When it’s only 15, it’s a lot easier to imagine slipping Nunez 50 bucks to distract Joe Girardi long enough to grab your glove and run out there to short before he can do anything about it. Sorry, skip, too late. I’m playing. It’s weird how a routine roster move can crush a fun dream like that.

The more I watch this Blue Jays team, the less impressed I am. You never want to underestimate a rival, but when you’re just an observer, you tend to notice things you might not if you were actually playing. Like that between innings, Colby Rasmus crawls into a dirty cardboard box full of damp towels and takes a nap. John Gibbons, the manager, runs a pop-up shop near the water cooler selling elaborate hunting knives to his players, and he’s doing pretty brisk business. R.A. Dickey is working on a novel. There seems to be a real leadership deficit there. They could really use a Captain. Who’s that going to be? You want to say Jose Bautista, but he played for the Pirates. That really kills the part of a man that gives him the fire to lead.

A series sweep is always a statement. And today that statement was, “Everyone is picking you to win the division, and we just took four in a row from you with Jayson Nix, Lyle Overbay, a backup catcher who couldn’t beat out Frankie Cervelli for a job, and Vernon Wells playing significant innings.” You don’t literally issue a statement saying that — it would provide bulletin board material to a potentially dangerous rival — but trust me, they got the message. You don’t strike out nine times against Phil Hughes and not do some soul-searching about your team.

I feel a little bit guilty about throwing Vernon Wells’s name in there. He doesn’t get a fair shake because he’s never really lived up to his massive salary. And after spending some time with him, I realize what a great guy he is, and how embarrassing it is for him to live with that giant number hanging above his head. He feels genuine guilt about it and works hard to stay humble. He sleeps in the chair in front of his locker most nights on homestands. On the road, he insists on bunking with the middle relievers. I’ve seen him strike out with a man in scoring position, then go right into the locker room and set up a college fund for a clubbie’s kid. You get why he was so popular on all the teams he crippled financially. Just a solid human being with the misfortune of having the worst contract in baseball history. It’s not his fault his agent is a genius.

No idea how I missed this, but Houston’s in the American League now. That kind of thing usually doesn’t get past me, but I suppose I’ve been a little bit preoccupied with my rehab. I don’t know how the realignment process works, but apparently it involved purging the team of every recognizable player and replacing them with Triple-A prospects. You hate to see a team stripped of its identity like that. And you hope the frozen orange juice people don’t pull their name off the stadium because they don’t want to be associated with a substandard product. There are only so many indignities a franchise can handle.

Youk’s bad back finally landed him on the DL. You hate to speculate about a guy’s health, because you always have to take him at his word about how he’s feeling on a particular day. And you also hate to continue to be suspicious of a new teammate’s motives, but if you were to plan out how to miss the maximum number of days with routine back soreness because you were still on the secret payroll of a certain rival, you’d probably sit out for about a week, come back for one game so that your DL stint couldn’t be backdated, and then tell the trainers things were still not right. Maybe I’m overthinking it. Maybe some guys just don’t have the kind of inhuman pain tolerance and relentless will to play, even at the risk of grave personal injury, as some other guys.

All you can do is focus on your own rehab and not obsess about the potential sleeper cell players sharing a dugout with you. That kind of thing could become a distraction.