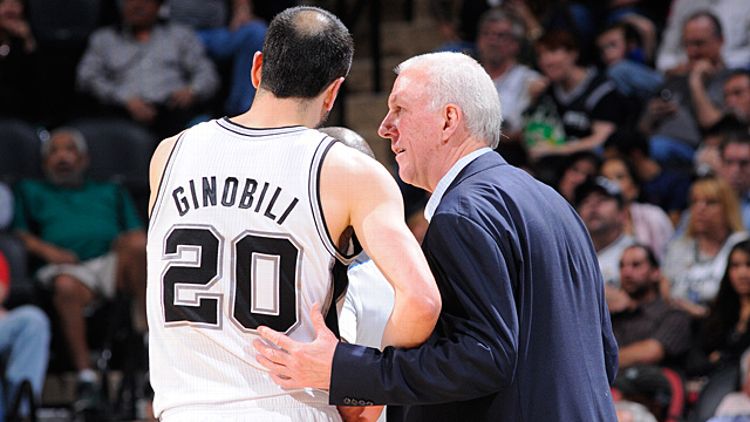 This year, like every year, I found myself thinking about the NCAA tournament during the first round of the NBA playoffs. It’s no secret that I love March Madness so much that I use the event as a bookmark for other memories in my life.

(For example: If you were to ask me how old I was when I broke my leg, my thought process would be: “Well, it happened the year Rick Pitino won the national championship at Kentucky, which was 1996, so I guess I must’ve been 8 or 9.”)

What might be a secret, however, is that I think the NCAA tournament is far from perfect, and there are aspects of the NBA playoffs that I wish were more common in the tourney. With that in mind, throughout the rest of the playoffs, I will be conducting an intense debate with myself — March Madness or the NBA postseason.

Today, I start with one reason why the NBA playoffs are better than the NCAA tournament.

Reason no. 1 why the NBA playoffs are better than the NCAA tournament: Bald is cool

As someone who currently has a thick head of hair and the same hairline I had when I was 14, I don’t have much of a reason to care whether bald is cool. But before you pat me on the back for being so considerate about the struggles of bald athletes, I should mention that there’s a history of baldness in my family. I know that my days of identifying with Willow Smith’s music are numbered, which is why even though I currently don’t need baldness to be cool, I want to help lay the foundation so I won’t have anything to worry about when I do go bald someday.

That said, one of my favorite things about the NBA playoffs that the NCAA tournament lacks is an abundance of bald heads, bald spots, receding hairlines, and whatever the hell it is that Andre Miller’s trying to pass off as hair. For millions of men (and even women) across the world, hair loss is a devastating and uncontrollable phenomenon that destroys self-esteem, confidence, and the ability to experience orgasms while using Herbal Essences shampoo. Don’t believe me? According to a statistic I just made up, Americans spend more than $2 billion every year on hair-loss prevention and hair-regeneration products. So, yeah, tons of people out there could use some reassurance that the rest of us aren’t pointing and laughing at them behind their backs.

Because basketball is one of the few regularly televised sports whose participants can’t cover their heads (and by few, I mean soccer is the only other one), it’s easy to notice which NBA players are a little light up top. Thankfully for bald people, it’s not the Brian Scalabrines and Mark Madsens of the league who struggle with their salads. In fact, there are so many top-notch players with anywhere from a receding hairline to a completely hairless dome that if you put them on the same team, they’d probably be favorites to win the NBA title. Look at this squad I came up with using only players whose teams qualified for this year’s playoffs.

[Note: I included guys who bust out the shaving cream and razor instead of going with a standard buzz cut only for the following reasons: camaraderie (like showing support for a friend going through chemotherapy or what the 1998 Pacers did for the playoffs), they lost a bet, or they no longer want to delay the inevitable.]

That list doesn’t even include other guys in the playoffs like Jason Kidd, Jason Terry, Kosta Koufos, Reggie Evans, Jerryd Bayless, and probably a few more who’ve slipped my mind. The point is this: Whether it’s something scientific like NBA guys having more testosterone or just something as simple as NBA guys being older, baldness affects many more pros than college players. But it’s not just that it affects a bunch of NBA players — it’s that it affects a bunch of really good NBA players who have the power to influence the public and determine trends. As long as they carry the torch that Michael Jordan, Clyde Drexler, Charles Barkley, and Shaquille O’Neal passed to them, there’s no reason why when I turn bald I won’t be able to puff out my chest and say, “I’m bald. I’m beautiful. And I’m really glad I don’t look like a penis like some bald guys do.”