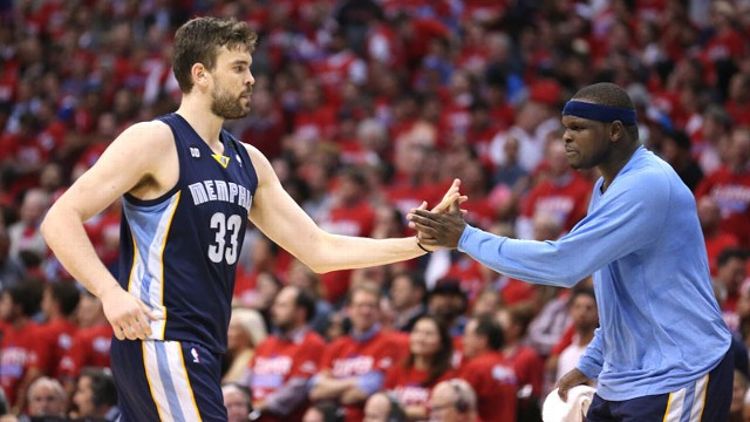 Together, they’re the best frontcourt in basketball, but in last night’s 103-93 Game 5 win, Marc Gasol and Zach Randolph did it one at a time. It started with Gasol, just after the second half began. Memphis had a six-point lead by the end of two quarters, but it was in the third that the Grizzlies took control, on the shoulders of their Spanish big man. Starting at about the 10-minute mark, Gasol touched the ball on the low block on seemingly every possession. He either scored or assisted the next four Grizzlies baskets, and in three minutes, Memphis built a 10-point lead it would never relinquish.

From the start, it was clear each team knew this game was probably it. For the Clippers, a loss meant having to travel back to the Grindhouse and a frothing Friday-night crowd looking to seal the series. And for Memphis, it would mean that, at best, it would be heading back to Los Angeles for a Game 7, in a building where it couldn’t seem to win. The result was an edge from the opening tip. Chris Paul, normally content to wade his way into a game by creating offense for others, took the ball to the rim from the start, and the amount of contact in the paint never seemed to subside. By game’s end, Gasol’s shoulders were a collection of scratch marks, and it was in part because of that style of play (and in part because of a terrible call) that he left the game after picking up his fifth foul with more than 10 minutes remaining in the fourth.

Without his frontcourt mate, Randolph took up the Grizzlies’ offensive burden. Blake Griffin had left the game for good in the third quarter. He’d suffered a high ankle sprain in practice, and after limping up and down the floor for much of the first half, he finally bowed out. His absence had an impact on the offensive end (and if he can’t play on Friday, will likely have an impact on whether the Clips have any chance in Memphis), but it also left Randolph free to wreak scoring havoc.

His first victim was DeAndre Jordan, who couldn’t stop a sweeping left-handed hook that Randolph used to push the Grizzlies’ lead back to 77-71. Then, it was Ronny Turiaf, who gave up two more Z-Bo lay-ins. Finally, it was Lamar Odom, who was in for about 30 seconds before Randolph hit a step-back jumper to put Memphis back up nine. The Clippers never went away in the fourth, but greeting seemingly every run was a calm Randolph bucket that stymied any attempt at a comeback. Ten of his 25 points came in the final 12 minutes.

Of course, after the game there was little talk from the Memphis players about how they scored. “We won this game on defense,” Gasol said, firmly sticking with the company line. Without Griffin, much of the Clippers’ offensive burden was left up to Paul, and in the fourth, there wasn’t much offense to be had. Memphis stuck the 6-foot-6 Quincy Pondexter on the point, and eventually, Paul stopped even making a move toward the rim.

Memphis is known for its defense, and so are many of its individuals. Tony Allen is among the league’s best perimeter defenders, and Gasol was the best defensive player in the NBA this year. What makes them great, though, Gasol says, is that the effort is collective. “Everybody that comes in knows they have to be engaged defensively, because if he’s not, he knows he cannot play on this team,” Gasol said. The answer was given so matter-of-factly that it seemed like Gasol believed it to be self-evident. Whether it’s Pondexter or Ed Davis, or whoever, you will play defense in Memphis, and that is that.

If a playoff series doesn’t start until a home team loses, then this one took a while to get going. But now that it has, the shifting map of the Western Conference may be coming into view. A Russell Westbrook–less Oklahoma City will probably soon dispatch with pesky Houston, but now it seems more than likely they’ll meet a charged-up Grizzlies team in the next round. If they were to get past the Thunder, a trip to San Antonio likely would be in the works, and that’s a series the Grizzlies know they can win.

For all that to happen it will require pieces of what happened Tuesday night. Memphis’s defense and its frontcourt haven’t changed since Gasol rounded into form a couple seasons ago, but if the Grizzlies are a team made for the Western Conference finals, it’ll be because Mike Conley plays like the player he was last night and has been for much of this season and a player will step up and hit shots like Tayshaun Prince managed to do in the fourth quarter. Either way, after pulling off three straight wins against a locked-in Chris Paul, the Grizzlies are a brawl-ready club that no one is looking forward to. As the clock ticked down last night, the PA announcer told everyone not to forget that after Friday’s Game 6 in Memphis, Game 7 would be right back here at Staples Center. With the stands emptying, it seemed like not too many were ready to believe him.