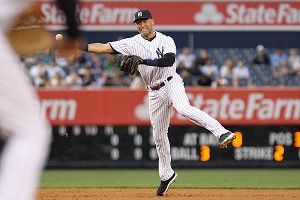 Wednesday, May 16: at Toronto

Girardi gave me the night off. This is how that conversation always goes when I see I’m not on the lineup card:

DJ2: Hey, Skip, I think you forgot to pencil me in for tonight.
Joe: Let’s give you the night off, Captain. Rest those knees.
DJ2: I’ve got a pencil right here, I can just erase this Jayson Nix name and put mine on there. Is there even a Jayson Nix on the team? There’s definitely a Derek Jeter on the team.
Joe: Take a breather. We’ll get you out there tomorrow. We’re playing 16 in a row, gotta keep you fresh, Jetes.
DJ2: I think The Binder says I should be playing. Take another look.
Joe: [Opens The Binder and finds $50,000 inside. Hands me back the money and just walks away.]

You never want the night off; you always want to play and help the team win, which is much easier to do if you’re actually in the game and not waiting around on the bench hoping to pinch hit in the seventh, having to make small talk with pitchers all game. Trust me, they don’t have much to say. Tonight I sat next to Kuroda, who started, and he barely said anything to me, just kind of nodded at my jokes. I get that his English isn’t great, but don’t patronize me like that. I know my jokes are funny — if I needed the empty approval, I’d talk to A-Rod. Maybe if Hiroki laughed a little more and loosened up he wouldn’t have gotten tagged for seven earnies. That’s just a theoretical; I’ll leave it to the stats nerds to figure out if there’s a measurable correlation between having no sense of humor and terrible starts.

So I didn’t play, and we didn’t W. Are those two facts connected? Would it have been a wiser strategic decision to take the 50 grand and the win? You hate to second-guess your manager, but picking up a game in the standings and a really nice Rolex seems like a no-brainer. I’m going to bed. Maybe I’ll give that money to Boonie to sing me to sleep. He’s up for anything if the price is right. I hope he doesn’t try to gently stroke my hair. That’s not as comforting as it sounds — he’s got some pretty bad calluses.

Thursday, May 17: at Toronto

There’s nothing worse than going all the way up to Toronto for two games and not getting at least a split. Your whole system gets put out of whack by the international travel, your body has no idea what time it is because of the latitude change, and you get super exhausted dealing with all the weird politeness. Tonight the fans got it together for a halfway decent “Yankees suck” chant, but if you look out into the stands, you can tell their hearts aren’t totally in it. It’s not a hockey game, it’s only baseball — nationally it’s not their thing. One time a fan handed me a battery. “If I threw this at you, you might get hurt. Just take it. You suck, have a good one.” Nice jerk.

Oh, wow, I saw the strangest thing on MLB Network. They had to stop the game in Colorado because thousands of bees were attacking the Rockies’ dugout. Some people might say that swarm was sent by God to kill Troy Tulowitzki for wearing my number, but I don’t necessarily believe that. I don’t even know if he’s allergic. If the Lord wanted to mete out divine justice to another shortstop for wearing my number, he’d probably do something that’s more of a surefire deal, like sending down a heart attack from Heaven during BP or maybe running an Illuminati assassin out on the field while he’s distracted with tying his cleats. I should point out that I have no beef with Troy — he just might want to think about a position change if he insists on making Him angry by keeping no. 2. We all make choices and have to live with the consequences.

Friday, May 18: vs. Cincinnati

No one saw this one coming: Andy Pettitte, eight innings, four hits, nine Ks, a huge W we really needed. I’m so proud of that guy. He’s out of baseball for a year to spend time with his family, he gets bored because it’s unnatural for a healthy 39-year-old man to be retired, he comes back to his team when they need him most. It’s a great story. If I ever start a family, it’s exactly the one I’ll tell them to explain why I’m trying to make a comeback at 47. They’ll understand.

Usually, you’ve just got to let things like this go, but in the bottom of the sixth the ump blew a call at the plate. I was obviously safe, you could see it clear as day on the 400-foot JumboTron each of the 30 times they showed it. I never like to show up the umps, so I didn’t make a big deal out of it at the time, but it’s my responsibility as baseball’s global ambassador to address a critical issue like this in my private journal. If we’ve got the technology to get these calls right, we’ve got to use it, especially when a blown call goes against the most popular player on the most popular team in the world. Mark my words: The age of the acoustic umpire is over. If you’ve got to put a cyborg ump behind the plate, so be it, even if the robo-umpire’s union is a lot weaker than the human one. This isn’t politics, it’s baseball. It’s important. You hate to put it so bluntly, but sometimes you need strong words to effect meaningful change. It’s time to end the tyranny of human incompetence. Bring on the age of total instant replay. I said it. I stand behind my words. It’s not like Bud Selig can suspend me for writing in my diary — he doesn’t even have the combination to the lock.

Saturday, May 19: vs. Cincinnati

Sometimes these kids just don’t get it. Nova gave up five runs, but he somehow also struck out 12 guys, so I said, “Hey, nice A.J. Burnett game!” to him after he came out in the sixth. Then, after our ninth-inning comeback fell a little short, he runs out on to the field and hits himself in the face with a pie. Yeah, it was a little awkward explaining to him that (a) the other guys have to hit you with the pie and (b) you only get pied if you win. It seems so simple, but you be surprised how many young guys don’t pick it up on their own. A good leader takes the time to teach the rules of the pie-game within the game.

Sunday, May 20: vs. Cincinnati

Sometimes things get a little dark when you send the Big Man out there, your unquestioned ace, and he can’t bring it home for you, especially when you’re in a bit of a rough patch, winning-wise. The tabloids start asking questions: Are these guys actually not very good? Is the offense flawed, too dependent on the home run? Why can’t they hit with runners in scoring position, like, ever? But you have to block out the negativity and proceed with total, unshakable confidence, despite what some so-called “people who are paying very close attention” want to say about your team. You’ve got to take refuge in the positives. All you can do is put good swings on the ball, hope the hits start to come with guys on base, and pray that you’re playing a team that doesn’t have access to that evil book Joe Maddon has that perfectly predicts where the baseball is going to land. You almost want to ask for a peek at that book to see if there are any spells that might create runs or give Troy Tulowitzki severe migraines, but it’s best to just go out there and play as hard as you can without getting caught up in the black magic aspects of the game. No one’s ever won the World Series with voodoo shortcuts except for the 2004 Red Sox.

Before I forget, I got a text from Chuck Knoblauch tonight. “hey jeetz met 2 chix on subway come meet me hurry they like yankeez.” Had no idea who it was from until he answered my “who dis” with “no rly hurry but pretend im giambi when u get here jason not jeremy” but it’s always nice to reconnect with old pals like that. Sounds like he’s doing great.

You’re usually happy when KC comes to town because (1) you can expect to win nine out of 10 these games, and (2) everyone on their team is called “the next George Brett,” so you don’t have to learn any new names. But not this time. That kid Felipe Paulino shut us down for the second time this season, so you have to like his chances to eventually make the Hall of Fame. You don’t want to coronate a guy with a 5.02 career ERA, but it’s hard not to conclude that you just went up against the greatest hurler in baseball history when there are six runs up on the scoreboard at the end of a game against the Royals and none of them were yours. That’s just bad luck, running into the “next George Brett of formerly erratic, now inexplicably unhittable pitchers” like that. All you can do is tip your hat to the guy without noting that your total inability to score is just a function of bad luck, that Mark Teixeira is still battling a nasty case of consumption he picked up while visiting 1859 in the offseason, and that Alex Rodriguez’s recovery from his German horse surgery is taking a lot longer to kick in than Kobe Bryant promised him. And you definitely can’t ask for his autograph, no matter how much it might be worth one day. You have to not-win with dignity.

Found out Freddy Garcia’s still on the team. This game will always surprise you.

Tuesday, May 22 vs. Kansas City

Look, I know I glossed over it last night, but I do realize yesterday’s ugly game dropped us to .500 and put us in a tie with Boston for sub-sub-sub first place in the East. I wasn’t ready to confront that fact quite yet, but a Captain always eventually faces the hard truths so that he can inspire his team to greatness. That’s the whole reason they make you go through the secret Captaining ritual where all the living Yankee Captains gather inside the late Mr. Steinbrenner’s Champions Vault, trace an invisible “C” over your chest one by one (no patches — they don’t want to hockey up the uniform like they do in Boston), and then make you eat a thimbleful of Lou Gehrig’s cremains. Traditions matter. So after I spent yet another sleepless night contemplating a course of action, the answer came to me:

Hey, it worked last time. And so I threw out the “.500 Is Fantastic … in Toronto” version and started over, knowing I’d need an even more powerful slogan to shake off this latest malaise. And so:

FRONT: “This is getting kind of stupid, guys.”

BACK: “We’re better than this.”

No anti-Toronto negativity, no snark, no unsightly, mediocre winning percentages. Just a simple recognition of how stupid this is getting. We’re the New York Yankees. We play today, we win today. (RIP Mariano Duncan, you are missed, and I’m not going to bite your T-shirt catchphrase, that was so great.)

Every winning streak begins with a single W.