Derek Jeter’s Diary: On Privacy and the Inspirational Value of Cold Cuts 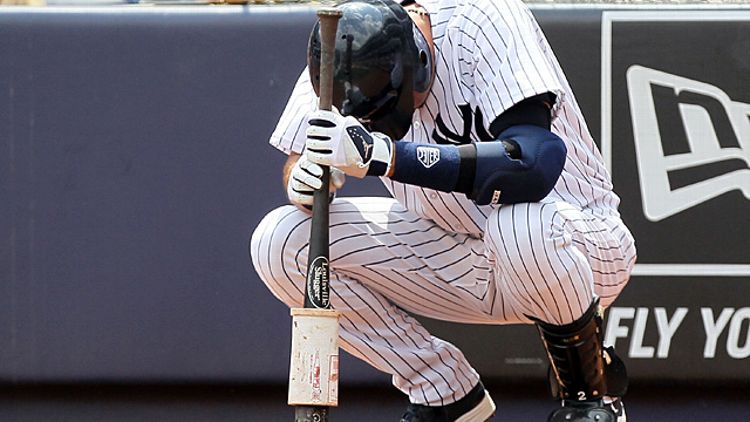 After winning, the thing I care most about in life is protecting my privacy. Yes, it’s a distant second to winning, and the third thing I care most about is also winning, so you can see just how important keeping my off-the-field activities private really is. Imagine, then, how it feels when I wake up in the morning, sit down to a delicious breakfast of healthy, wholesome foods my personal chef has prepared for me, and open the paper to discover that Page Six has written yet another story about who they think I’m dating. You hate to let a gossip column get to you, but it can ruin your entire day. You don’t even want to finish your wheatgrass smoothie and turkey bacon, it’s so upsetting.

I’m not going to confirm or deny whatever they wrote, or even repeat the name of the stunning young model they claim I’m dating. You can look that up on your own if you’re interested in violating my privacy. Why don’t you just go through the garbage in the master bathroom, trying to acquire some DNA you could use to clone my hand and defeat my apartment’s biometric security system, then just hang out in my closet for a few days, hoping to catch a glimpse of my next overnight guest? Reading about my romantic life is pretty much the same kind of creepy violation. And don’t even think about smelling my shoes while you’re in there. Boone Logan and I have reached an understanding about that kind of behavior, and as he’ll tell you, I don’t allow it.

My privacy aside, put yourself in the young lady’s position for a minute: I’ve had many very, very beautiful, and often very, very famous girlfriends. The guys on the team call my dating résumé “Murderers’ Row” — after the legendary Yankees lineup of the late 1920s, not because any of them have attempted to kill me after the end of our relationship, not even Mariah Carey. (That situation turned out to be an unfortunate misunderstanding. It can be easy to misinterpret death-threat tone over text message. Live and learn — restraining orders are very simple to reverse.) No matter how hard I try to make any new woman in my life feel special, and I’m not saying there is a new woman in my life, they’re always going to feel some pressure to live up to the weight of my staggering romantic history. It’s insane who I’ve dated, to be totally honest. So I really don’t appreciate the tabloids adding to that pressure with their intrusive speculation about whether or not we’re in a relationship.

Get out of my business, shoe sniffers, is what I’m saying. Let me live my life. Again, not you, Boonie. We’re good.

Oh, even with all this nonsense going on, I went 3-for-4. We won. I told you winning was the most important thing.

Someone hacked the Yankees’ Facebook page. “We regret to inform our fans that Derek Jeter will miss the rest of the season with sexual reassignment surgery. He promises to come back stronger than ever in 2013 as Minnie Mantlez.” Real funny. Couple things:

(1) Obviously not true. You hate to even address something this silly, but sometimes you have to set the record straight so that you’re not getting worried phone calls from your parents that lead to some very weird and uncomfortable conversations.
(2) If I were to undergo sexual reassignment surgery, I would never do it during the season and leave my team in the lurch like that. I mean, come on. It should be obvious I’d delay resolving any kind of personal identity struggle, no matter how painful, until the end of the playoffs.
(3) I’d never take the name “Minnie Mantlez.” Doesn’t Denise Jeter seem like a much more logical one? I might even go with Winnie Winfield, since Big Dave was my favorite player growing up and there was a real elegance to everything he did. Whoever was responsible for this hacking didn’t put a lot of effort into researching which legend I might want to celebrate if I were to ever switch genders. Nothing against The Mick, who was a truly great Yankee, that’s just not a very good name choice for me.
(4) “Dereka” has a nice ring to it, though, now that I think about it. Kind of exotic.

You have to wonder if Page Six was involved somehow. Privacy, man.

Putting on the pinstripes changes a guy. You don’t want to call them “magic,” a baseball uniform is basically just very fancy pajamas, but you can’t deny there’s something different about a player from the minute he’s in our home whites. You should have seen Ichiro during pregame warm-ups. He’s been with us for less than two weeks and it was like he didn’t even recognize any of his old teammates. On the other hand, it’s entirely possible he didn’t bother to learn any of their names this season. They’re all rookies and it’s 50-50 he’s done with baseball after November. That’s a lot of useless information to commit to memory when you’re a few months away from retiring to a private hover-island floating above Osaka. He’s shown me pictures, it’s pretty cool. I may get one of them as a New York crash pad when I eventually retire to Tampa. Let’s see the New York Post try to follow my girlfriends up there. I’m going to bet a dying newspaper’s budget doesn’t leave a lot of room for flying jet-cycles.

There are days where you just run into a buzz saw. There are no adjustments you can make, no way to wait a guy out and sit on a mistake, because one’s never coming. King Felix ate our lunch. It’s that simple. You gotta tip your hat to him. In the ninth inning, I flew out, jogged by the mound on my way back to the dugout, gave him a playful shove. What the cameras didn’t pick up was what I told him when I crossed the mound. “I’m sending Joba Chamberlain to your hotel tonight to beat the shit out of you. He’s fucking crazy.” Then I laughed to break the tension. But I promise you this: Felix is going to sit bolt-upright in his bed all night, terrified that the chubby-faced room-service guy who keeps knocking on the door is going to bludgeon him with that silver catering dome thing. I bet he doesn’t even get up to go to the bathroom.

Congratulations to Freddy Garcia on his 150th career victory tonight! Only took him 31 years in the majors. That kind of incredible longevity is quite an achievement in and of itself.

There are days where you just run into a buzz saw. There are no adjustments you can make, no way to wait a guy out and sit on a mistake, because one’s never coming. It’s that simple. You gotta tip your hat to Justin Verlander.

You know what? No, you don’t. Screw that. I’m sick of buzz saws at this point. When Nova got pulled with one out in the sixth after a total shelling, I intercepted him before he could hit the showers and made him sit on the bench next to me to watch Verlander carve us up. A Captain always makes the effort to turn a disaster into a teachable moment.

“You see that?”
“See what, Jetes?”
“See what, Captain.”
“Sorry, Cap. See what?”
“Just look real close.”
“OK.”
“See the way he isn’t a total embarrassment to the art of pitching, who might need to spend the rest of August in Triple-A proving he won’t totally fall apart after he gives up yet another two-run double on a hanging slider?”
“See who again?”
“Forget it.”

You can’t get through to some guys. All you can do is walk them back into the clubhouse, sit them in front of a video of every A.J. Burnett start from 2011, and hope that eventually a little light bulb goes on. And also tell them, “A.J. Burnett was so awful for us last year that we traded him to Pittsburgh for a tray of cold cuts, and we are going to do the same thing to you if you don’t take any lessons from this video of his bad pitching I’m now forcing you to watch.”

And then just walk away when they say, “Got it, Cap. Won’t eat the cold cuts.”

There’s a very wise saying smart baseball people have been passing down since the dawn of organized baseball: “Don’t let their best guy beat you.”

Phil Hughes got the A.J. Burnett speech in the fifth inning.

After the game, I found him in the shower, crying, shoving fistfuls of ham and salami into his mouth.

I’m starting to feel like maybe the cold cuts thing isn’t quite connecting.