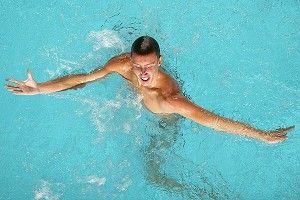 It was a joke: Martin Short and Harry Shearer were two male synchronized swimmers who had given up everything in their quest for Olympic gold.

It was made all the more ridiculous by the fact that (a) Martin Short couldn’t swim and (b) there was no men’s event even in the Olympics. And the premise for this Saturday Night Live sketch was so well executed that, almost 30 years later, few people have even bothered to revisit the subject.

But 30 years later men’s synchronized swimming is also no longer a joke, which is to say there are men who do it, and they take it seriously. Honest. And, in a bizarre instance of art imitating future life, they want to go to the Olympics.

In June of this year, Paris Aquatique, the London-based club Out to Swim, and the Federation of Gay Games sent a jointly signed letter to ICO President Jacques Rogge and FINA President Julio Maglione appealing for inclusion of men in synchronized swimming at the Olympics. And they are completely not kidding.

From the letter: “[It’s] a sport with a long history of men’s participation, and which is growing in number and quality of participants. Despite the goals announced by British Olympic authorities to make the 2012 Summer Olympics a place for true equality, men will remain excluded from this discipline in London.”

“Growing” is a relative term, and, admittedly, the talent pool isn’t that deep. Stephen Adshead, who manages the men’s synchro team at OTS, says there are “about 20” men in the U.K. practicing at the club, with “more in France.” Moreover, it might seem a little disingenuous for OTS to argue on history, as the club has only been doing synchro since 2010, but when it comes to competing they aren’t kidding around. They’ve got a former Soviet-bloc synchronized swimmer for their coach and have picked up gold medals at the last two EuroGames as well as gold at the last Gay Games.

And the sport’s male reach is reasonably international, with competing teams in Italy, the Netherlands, the Czech Republic, Germany, and Sweden. There is actually a pretty great documentary called Men Who Swim about that very cadre of men in Stockholm who have taken up synchro (highlighted by a scene in which their female coach calls them “pussies” for opting to perform in wetsuits).

That breadth has helped give rise to a biannual event on the continent called the Men’s Cup, which, if you have a firm grasp on the obvious, you can probably divine is for men. Last year’s competition in Amsterdam was the fourth installment, so it is establishing a bit of a legacy on which to build (you can see pictures of the guys featured in Men Who Swim at Men’s Cup IV here).

Even the U.S. has a bit of a male synchro history: Back in 2006, American Kenyon Smith went so far as to compete at the U.S. trials for the Beijing Olympics. He made it through to the second-to-last round before being informed that he was disqualified on the basis of having a y-chromosome.

But, even though some federations — and U.S. Synchro is one of them — now allow men to compete alongside women in sanctioned competitions, FINA and the IOC still exclude men from both the World Championships and the Olympics.

And that FINA might be slow to take men’s synchro seriously is a bit of a curiosity. According to the most recent report on Olympic core sports (PDF; 2009), of the 25 people on the FINA Bureau, 24 of them are men (and that’s actually an improvement, as in 2005 it was all men — 24 of 24 positions). So, on the one hand, it’s a bunch of guys. On the other, they don’t seem to be the most progressive folks when it comes to gender equity.

Or maybe FINA will never get past Men’s Synchro being Martin Short. It was pretty funny.

Derek Jeter's Diary: On Privacy and the Inspirational Value of Cold Cuts