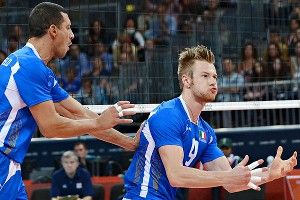 I don’t remember how it came up — probably because I thought it’d come up before — but at some point yesterday in the office, I started in about my love of indoor volleyball. My co-workers were surprised, and in turn, so was I. There are people who don’t love indoor volleyball?

I started watching in high school. My friend made the varsity team as a freshman, and because we all thought that was pretty cool, a few of us started hitting every home game. By our junior year, we had one of the best men’s (and women’s, actually) high school teams in the state, and groups of us started traveling for games. Our volleyball crowds were bigger than the ones most schools fielded for basketball.

The interest hung around through college. My friend went on to one of the nation’s best volleyball programs, and I caught enough games — including their national championship win — to remember why I loved watching in the first place. So when I was asked yesterday to catch some Olympic indoor volleyball and make my case for why it’s so great, I happily accepted. Conveniently, the U.S. was set to play Italy this morning in the start of the men’s quarterfinals.

Volleyball rules are fairly simple. One team serves (either a jump serve or a sort of floater — not the underhand-bump stuff from gym class), and then a rally begins. A point is scored by landing a ball inbounds on the other team’s side. Games end at 25 points by one team — win by two — and the first team to win three games takes the match.

This sounds like it’s not worth mentioning, but this version of volleyball scoring has actually only been around for about a dozen years. Previously, only the serving team could score. “Rally scoring” was adopted internationally around the turn of the millennium, and it completely changed the sport. The game became more spectator friendly in every single way. Each point now mattered, and the added tension made live viewing more exciting.

During the team introductions this morning, one advantage became clear for the Italians — hair. Mostly in that they had some. Italy has Ivan Zaytsev. We have Jason Kidd playing libero. I see that my volleyball-playing friend is online and ask him whether a receding hairline is a requirement for entrance onto the U.S. team. He says no, technically speaking, but that most of the American Olympic volleyball team is actually in their 30s.

This seems counterintuitive. Volleyball appears in many ways to be a simple game predicated on almost nothing but height and jumping ability, one that requires the same athletic skills as basketball but none of the refinement. Young, bouncy athletes would figure to be the best candidates. The reality is much to the contrary. Before the last Olympics, Matt Anderson was a 21-year-old outside hitter for Penn State and the best college volleyball player in the country. He was a 6-foot-10 monster who dominated the college game, not unlike Anthony Davis did for Kentucky this spring. Yet when the 2008 Olympic roster was assembled, Anderson was left off, the talk about him focusing on how good he would be in the future. For much of these Olympics, at only age 25, he’s been a driving force for the U.S., but against Italy, inexperience showed. Anderson struggled throughout, the majority of his spike attempts handled without incident.

Blocking those hits in indoor volleyball usually includes two or three players, (the middle blocker(s) and either the opposite or outside hitters), and if we’re going back to the basketball comparisons, it’s a bit like blocking a shot — ya know, except the basket is 30 feet wide and if the block doesn’t land inbounds, the other team scores. At one point, an Anderson hit is blocked solo by 36-year-old Luigi Mastrangelo, which is the volleyball version of this. Later, Zaytsev and American Donald Suxho go up for a ball directly above the net, and Zaytsev simply shoves it back onto the U.S.’s side. And that is the volleyball version of this.

The U.S. jumps out to an early lead, but by the middle of Game 2, it’s clear the Italians have the advantage. The team is full of killer servers, including Sacha Baron Cohen, and their serving dominance combined with the U.S.’s lackluster finishing are enough to give the Italians the first two games.

Zaytsev is a force throughout — blocking, serving, and taking the majority of the Italian sets and doing work with them. By the second game, it’s clear that he’s the reason I enjoy volleyball. The importance of each point and the short break following the score and before the serve involve about 50 chances a game for no-reservations emotional reactions. It’s the type of fist pumping and full-body screaming normally reserved for a three-goal soccer match. The result is an intensity that never stops. When the match ends, the Italians have taken three straight and are set to face world no. 1 Brazil on Friday. Tune in. I honestly don’t think you’ll be disappointed.