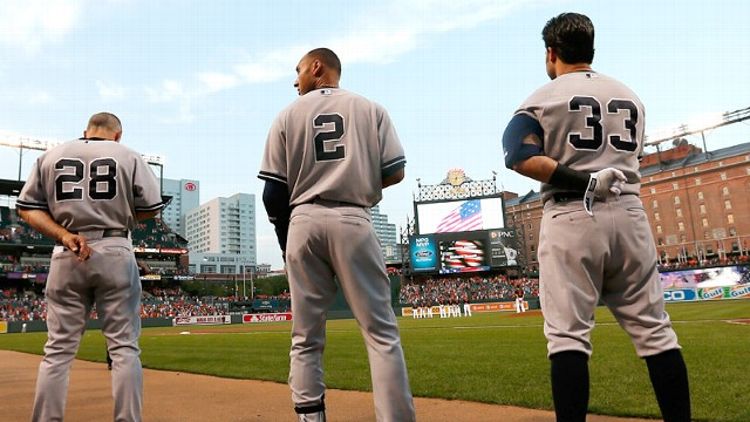 Writing a diary virtually every day during a 162-game season can be a really difficult undertaking, even when you’ve got Hall of Fame–caliber self-discipline. On a fundamental level, it shouldn’t be that different than getting your pre- and postgame hacks in the cage, or taking infield practice, or running through your three daily hours of Total Excellence Visualization Exercises. But in practice it is a different thing, drawing from a skill set that isn’t as automatic to call upon as your patented inside-out swing or jump-throw from the hole. And so there are many times — more than you’d like to admit — where you sit down before the blank page and just stare at it for a while, frustrated, wondering if you should just get up, flip on the TV, and see if you can finally clear some of those Gallery Girls episodes off the DVR. These are the nights when having a journaling coach on retainer really pays off. And so when I found it harder than usual to get going on tonight’s entry, even after a much-needed pick-me-up in Tampa, I called him in New York, where he used to teach a Learning Annex class called “Unleashing the Diary Power Within” before I locked him down privately.

First, he directs me through a “free-writing” exercise. “Just write anything at all for the next 30 seconds. It doesn’t matter what it is, but don’t stop until I tell you to,” he says. “Go.”

I look down at the page. Full of W’s. 162 of them. All the same size, perfectly spaced, consistent in execution. I tell him.

“Very good. Now let’s try a word-association game. I say a word, you write down the first thing that comes to mind. Ready?” I tell him I’m ready.

After 156 more prompts and 156 more scribbled “wins,” he tells me I’m unblocked. And I am. I feel ready to write. In fact, I have written, over and over again, about the only thing that matters. I tell him we can skip the diary trust falls, where I pick up the book and drop it to the floor over and over again until I realize that gravity’s the most trustworthy force of all, then call it a night and catch up with Angela and the Gallery Girls.

Every single cent of the $20,000 per month I pay that coach is worth it. He’s really damn good.

People will try to tell you that this four-game series in Baltimore is make-or-break since we came in here only one game up in the East. I know I’ve harped on this before, but I can’t stress it enough: There’s almost an entire month left in the regular season. And at the end of that month the better team will be standing alone atop the division, getting itself ready for the playoffs. You hate to say who you think the better team is, especially when that team has not necessarily played its best baseball lately, and the other team has this super-annoying habit of not totally collapsing now that it’s September and the games feel like they count a little more (they don’t; they count exactly the same), but you have to maintain the unshakable conviction that your team will be the one to prevail. If you don’t have that faith, you should just pack your bags and get started on your winter vacation early. I hear St. Thomas is very nice. I won’t see you there. I’m on the team that’s about to surge into the postseason and silence all the doubters; I’m a little busy at the moment.

Did tonight’s game bother me? No more than any other game that didn’t go our way, even though we have to share first place until tomorrow. Quite frankly, I’m a lot more bothered by this story about Minka getting back together with Chris Evans. She can do a lot better than that guy. She has done a lot better. You never want to talk about your personal life too much in your diary, but maybe if a certain ex late-night-texted you a photo of a red-white-and-blue shield with a big star in the middle of it, you answered right back, “Baby, you were with the REAL Captain America for three years,” then turned off your phone and went to bed smiling, because that was a pretty great response. It feels almost as good to win in life as it does on the field. Almost.

Hughesy makes it interesting sometimes, even with a big lead, but the important thing is he got the job done. You know how some guys “paint the corners”? Phil likes to take his pitch-roller and just go at the middle of the plate. Maybe that approach is a little risky sometimes, but in his defense, it’s much easier than doing the delicate trim work.

But just like that, we’re back in first, all alone. No, a one-game lead isn’t ideal, but we play baseball in the real world, not on some fantasy planet where that 10-game cushion didn’t shrink a little bit more than you’d like because of a variety of factors you won’t name because you’re not paid to list excuses, no matter how seemingly valid; you’re paid to be in first place. Which we are. Not that I looked at the standings, I just have a kind of psychic feel for first, having spent the vast majority of my career there. We call it Jete-SP. Russell Martin will come up to me and say, “Hey, Cap, use your Jete-SP and tell me if we’re in first.”

I’ll put my fingers up to my temples for a second and close my eyes. “Yup, first place.”

And then Grandy will check the scores and confirm it.

There are two ways you can handle a situation like tonight, where an ump makes an obviously terrible call that cost you the game. You can complain about it, or you can try to take away a lesson and move on. You hate for that lesson to be, “Maybe it’s time we replace error-prone umpires with robots and cameras so that a team in the heat of a pennant race — even if there’s still plenty of time left in it — never has to sacrifice a win just to maintain the quaint illusion of the ‘human element,'” but you can’t dictate the lesson, you just have to learn it. I’m the learning type. I’m just saying: If we have the technology to read the back of a baseball card from a satellite in outer space, why not apply it to determine whether or not an actual baseball was still three feet away from a first baseman when a sliding runner is already elbow-deep in the bag? Seems sensible. I’m going to suggest that directly to Bud Selig and cc Jerry Meals on the e-mail. I bet Jerry even agrees with me — he probably feels awful that he let the world down like that, and that Tex re-injured himself on the play to boot. I hope he’s OK; that’s a lot of guilt to deal with. Maybe I’ll also send him a DJ2 gift basket so that he knows there’s no hard feelings for potentially ruining a season. It’s not going to be easy to be a pariah in New York for the rest of his life because of one very big mistake.

It feels good to play in the occasional laugher. It loosens everyone up for a minute, which is important, because Girardi’s been a little tight lately, and it was nice to see him take a deep breath and undo his top jersey button in the locker room before disappearing into his office to three-hole-punch 200 pages of postgame spreadsheets for The Binder. He really earned that unbuttoning.

But that’s as far as the celebration goes. We haven’t won anything yet. As Yankees, we celebrate only three times per season:

Second Celebration: After winning the division, gathering around a single bottle of chilled champagne with a note on it that says, “You have accomplished nothing,” and then reaffirming our team commitment to winning the World Series or declaring the entire season a humiliating failure.

Third Celebration: Parade down the Canyon of Heroes.

The White House visit is optional. A lot of us have been there a bunch of times already. Oh, and Swish is no longer welcome because of what we now refer to as “The Lincoln Bedroom Upper Decker Incident.” He still thinks the body cavity search by the Secret Service was totally worth it.

Caught Major League on cable. That movie kind of drives me crazy. How can the Indians compete with a two-man pitching staff, especially where one guy’s a 60-year-old junkballer and the other is a rookie with control problems they keep bouncing from the rotation to the bullpen? Just ask Joba Chamberlain or Daniel Bard — that kind of strategy never works out. Also, I never buy into that whole thing where the owner keeps denying the team basic training equipment. One simple grievance filed by the Players Association and that’s immediately cleared up; that’s why we have collective bargaining. And the Yankees as “bad guys”: Right. I get it, it’s supposed to be a comedy, but you need to do some basic research and ground things in reality before you can expect people to laugh.

It’s like the Red Sox don’t even care about what this day means to New Yorkers.

Is This Real? The Incredible Mr. Sanchez