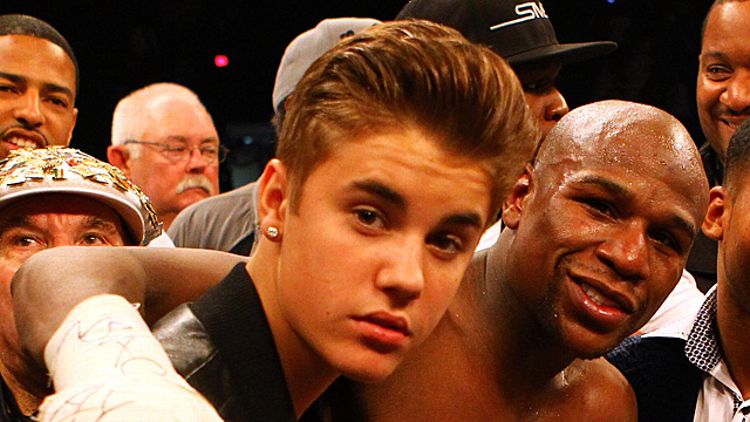 If you’re incautious enough to spend any period of time looking at online gambling forums, two things will probably occur. Firstly, your faith in humanity will quickly disappear, and secondly, you’ll be amazed by how gullible people can be. Any online claim of extraordinary betting prowess will immediately be met with the challenge “pics or it didn’t happen,” but if you add a photo of a betting slip, the natural skepticism of the Internet’s gamblers will disappear immediately. Have these people never heard of Photoshop? However, there’s one gambler who never needs to be prompted to post a photo of his winning bets, and his bankroll is so huge that there’s no reason to suspect foul play: I refer, of course, to boxing’s undefeated quintuple world champion, Floyd “Money” Mayweather Jr.

Mayweather is famous for his enormous bets, largely because he’s been tirelessly promoting himself on Twitter as boxing’s answer to Nick the Greek. By my count, between August 2010 (when he began tweeting his slips) and February 2012, Mayweather tweeted photographs of 46 betting slips, totaling $3,890,833 worth of bets, and every single one of them was a winner, netting the fighter a cool $3,938,722 (and 87 cents) in winnings on those bets. Losing betting slips have been conspicuous by their absence. When asked about his losing slips, Floyd responded, “Why would I ever show a losing ticket when I’m 41-0.”

The full amount of Floyd’s bets — and particularly of his losses — has long been the subject of Internet speculation, and that speculation only increased when Mayweather stopped tweeting pictures of his winners in March this year. The absence of hard information only led to rumors of enormous Mayweather wagers being placed around Vegas. In April, he was widely alleged to have placed $1.8 million worth of bets on the Clippers beating a six-point spread against the Grizzlies, which would have been a winner. Then last month, a rumor circulated that he’d placed $3 million in bets on Michigan staying within 14 points of Alabama, which would have been a very costly mistake. Throughout Floyd’s quiet period, the tales of million-dollar wagers only ceased during his nine-week spell in jail, during which time he was probably gambling to try to win himself a better diet.

Well, the quiet period is now over. Happily for fans of photos of betting slips adorned with very large numbers, Mayweather’s back in the game, and he seems to have been irked by the suggestion that he spewed several million dollars on the Wolverines, a charge that he denies. That’s understandable, as it would either be a gross insult to his betting skills if false, or highly embarrassing if true. Either way, Floyd’s been making up for lost time, posting $950,000 worth of betting slips to Twitter in the last week, including — and I can hardly believe I’m writing this — a till slip showing a losing bet. Floyd put $100,000 on the Lions -6 in the first half against the Rams on Saturday. The champ is defeated! Floyd Mayweather is 52-1!

Now, this obviously isn’t Mayweather’s first loss. At the very start of his gamble-tweeting career, he claimed to average $100,000 of bets a week, and since then, his bet-sizing seems to have increased, if anything, so it seems reasonable to take him at his word with regard to his betting volume. This means we can make some assumptions about his losses. His first tweeted slip dates back to November 21, 2009, so by Mayweather’s reckoning, he would have placed $13.8 million worth of bets since that first tweeted slip (taking time off for reprehensible behavior into account — I assume he wasn’t betting from jail). He’s tweeted photos of $4.74 million worth of betting slips, which have generated $4.7 million in winnings. That would leave him just over $4.35 million in the red, assuming he maintained his weekly average of bets and posted every winning slip, and there’s no reason to assume otherwise. Floyd seems to have been meticulous about tweeting wins that would cause most of us to explode with joy but will have barely registered on his enormous bankroll, such as this $8,000 winner on the Mavs last April.

There are other reasons to doubt that Mayweather’s sitting on a stack of winning slips that he never bothered to tell anyone about. For one thing, he hasn’t been shy about coming forward with winning bets that most gamblers would be embarrassed to cash in on, never mind tweet about. For instance, the time when he proudly declared himself to be “the only man in America to bet $50,000 on the Cleveland Cavaliers” to cover a +12.5-point second-half spread versus Miami. I suspect the same could be said if you reduced the wagered amount to $500. When the bet was placed, the Cavs were 11 points clear of the Heat, with the entire lead built during a second quarter in which LeBron James played less than eight minutes and scored precisely zero points. Mayweather clearly spotted value in this situation, and tossed a $50,000 brick in the direction of the M Resort’s cashiers, who must have struggled to maintain a straight face. If Mayweather’s gleefully boasting about bets like that, under what circumstances does he keep quiet?

But maybe Floyd sees things that lesser gamblers don’t, and these calls can be highly subjective. One man’s improbable lead caused by a briefly misfiring James is another’s surefire, solid-gold, $50,000-on-the-Cavs banker. No, for incontrovertible evidence that Mayweather tweets all of his winning bets, we have to go back to Valentine’s Day 2011, when Floyd tweeted to his fiancée, Shantel Jackson: “Happy V-Day baby. I’m a very busy person, but never too busy to pick up a few gifts for you.” Aww! This came with a link to a receipt for $50,520 of love bling. Now, we can debate the merits of sending a Valentine’s message through a public medium such as Twitter, and whether 140 characters is really sufficient space to fully express your devotion to your betrothed. We could question the wisdom of using 27 of those characters to link to a receipt, and whether it’s possibly more romantic to give gifts in person, and without previously announcing their total worth to the Internet. But one thing’s for certain: You definitely want to avoid bookending your tweeted token of affection with two other tweets detailing $60,000 in winning bets. (Tweet no. 1, tweet no. 2.) Apart from anything else, it undermines your claims to be a very busy person, unless your definition of being very busy stretches to spending your time hanging around Vegas casinos and betting on the NBA.

Bearing the above in mind, it’s almost impossible to conceive of a situation in which Mayweather wouldn’t post a winning betting slip, so we can be fairly sure that we’ve seen them all. The question now is, What has motivated Floyd to start tweeting losing slips? Could it be a cunning ruse to try to lure Manny Pacquiao into the ring? Perhaps Floyd thinks that his public displays of invincible betting prowess have scared off his nemesis, and that he can bring a confrontation closer by exposing his weaknesses. He may be 43-0 in the ring, but in other areas of Vegas, he’s vulnerable! Or perhaps Floyd’s decided to finally set himself up as a tipster? In one of his latest tweets, he claims that he’ll be posting his betting picks on his MemoMeMore page. We may be about to see Mayweather’s emergence as the world’s foremost gambling expert!

With that in mind, I’m offering 6/5 on Floyd posting a winning record over his first 10 picks. Also, I’m selling magic beans, fresh in today, guaranteed to turn into a fine, strong beanstalk. You want pictures? I have pictures. Special offer! Great price!