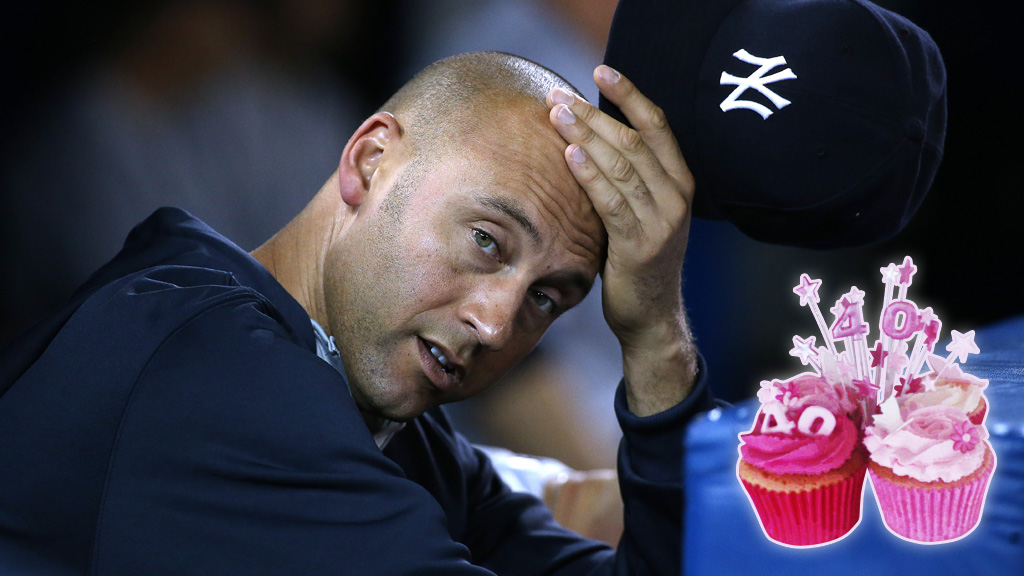 Thursday, June 26: Off Day
I turned 40 today. People will try to make a big deal about it. But it’s not a big deal to me. I’m not going to dwell on it. I’m not going to be depressed about it. I’m not going to mope around my apartment, staring blankly out various windows at the nighttime skyline, wondering if I’m suddenly closer to death, because I am. You just have to accept that’s the way that time works and go out there and take the rest of your life, however long it’s going to be, one more day at a time. And 40 is just another number. You can’t go around being afraid of numbers. Baseball’s full of them. Like the 2 I wear on my uniform, or the 5 rings I have before we win another one in my final season, or the 27 Yankee world championships. You learn to appreciate numbers like that. You learn to make peace with them.

Some friends threw me a small, private party tonight out in Manhattan. I didn’t want to make a big deal out of my birthday, but sometimes people have different plans, and you just go with it. You have a good time. You say hello to your friends and settle into your table and let people come to you. Diddy shows up. LL Cool J shows up. Your old teammates who are still around town show up. President Clinton, whom I’ve always been tight with, stops by. Oprah and Gayle. Lil Jon and Josh Groban. Warren Buffett and Mr. Trump, who’s technically my landlord. Bono. Jay. LeBron. The entire Shark Tank, including Barbara, even though she’s your least favorite, she just tagged along.

You’re not going to run through the entire guest list; this isn’t the society column, it’s your diary. But a number of my ex-girlfriends were also there, all of whom I’m still on speaking terms with, because that’s the only way adults should handle old relationships. Otherwise you start to get into tabloid situations with every woman you ever may or may not have gone on a date with and suddenly People is reporting what you had for dessert, which is always the same thing — you believe in the power of routine. Anyway, Minka gave me a basket full of 40 signed baseballs. She always had a pretty good sense of humor, even about how my retirement announcement said I’m finally ready to start a family once this season’s over. It’s nice you can laugh about that stuff with someone who thought they might be spending the rest of their life with you at one point. Maybe I’ll have someone read the baseballs first before I take a look at them, just to be safe.

There was a cake in the shape of a movie reel, wheeled out by Marty Scorsese, which depicted various highlights from my career. Then they wheeled out 10 more cakes, because they didn’t want to miss any of the big moments. It was maybe a bit strange because it was like watching your entire life flash before your eyes, but in cake form, and then everyone eats all of your cherished memories. There was a small argument between my mom and Mariah over the piece with my 3,000th-hit homer. Mariah let her have it in the end. She settled for The Dive because it had one of those icing flowers on it where the cuts on my face should have been as I climbed out of the stands with the ball. You hate to see anyone fight, because there’s plenty of highlight cake to go around. I’ll be eating highlight leftovers for weeks.

Late in the party, I got to talking with Stephen Hawking, who’s always been a personal hero. He asked if I felt old. I told him no. He said that was good, because in the grand scheme of the universe, I wasn’t even a baby yet. I wasn’t even a fertilized egg. I wasn’t even the glimmer in my father’s eye the night I was conceived, or the glimmer in his father’s eye, or in all of his ancestors’ eyes. All I could do was nod. I’m sure the math on that checks out; he’s a genius of some kind, even if I suspect he was a little overserved. But it really put turning 40 into perspective.

I’m not even a baby yet.

A lot more numbers to collect.

And a lot more highlights to put on my next cake.

Friday, June 27: vs. Boston Red Sox
You never want to wake up hungover on a game day, even if it’s the morning after your 40th birthday and first pitch isn’t until 7 p.m.

You especially never want to wake up with a pouting centaur standing at the foot of your bed with his arms crossed and tears welling in his eyes.

“Did you enjoy your party last night, Jetes?”

“Would you like a Gatorade? To replenish your electrolytes?”

He extends a Gatorade bottle toward me. Then turns it over and pours it onto the bed. He drops the bottle on the floor and crushes it beneath a hoof.

“I waited up for you in the wardrobe. All night.”

“I was pretty beat when I got in.”

“You could have knocked and summoned me.”

“It would have been nice.”

“I wish you could have come.”

“You know I can’t do that, Jetes. They can’t see me in my perfect form. They’re not ready for it.”

“I just wanted to give you your present on your actual birthday. That’s all I wanted.”

“You didn’t have to get me anything.”

He opens the wardrobe doors. A terrible stench fills the bedroom.

I sit up and try to look inside. All I see is a mass of white feathers.

“Forty doves, Jetes. Forty doves for 40 years of you.”

“Are they all dead?”

“They weren’t last night, when I was waiting for you to knock on the wardrobe and let them all out into the room.”

I cover my nose with a pillow.

“It was going to be so special.”

I get out of bed and shut the wardrobe myself. I notice that the doves are all wearing tiny Yankee caps.

“I made those hats myself.”

Saturday, June 28: vs. Boston Red Sox
You hate to watch someone throw an incredible game and then ruin it with one bad decision. You wonder what was going through Tanaka’s head when he got to two strikes on Mike Napoli in the top of the ninth with the score tied at 1, and then threw him a fastball instead of the splitter. Did he misread a sign? Was he bored of striking guys out with the untouchable pitch? Was it all feeling too easy, so he wanted to try something with a higher degree of difficulty? It’s impossible to know the mind of a pitcher. It could be any of those things, it could be none of those things, it could be all of those things. All you know is that he went fastball, Napoli knocked it into the first row in the right-field seats, barely, and then we’re all sitting in stunned silence in the dugout.

You could hear Napoli yelling “What an idiot!” to his teammates across the diamond, totally shocked he was denied the chance to wave at yet another pitch diving into the dirt. Yes, that’s disrespectful, but you can’t really fault players for the classless things they say in the heat of the moment, especially when it’s an unfortunate organizational philosophy they’re taught from the moment they pull on their first pair of red socks and starter beards. All you can do is go out there and throw him the unhittable pitch next time, because in just about every situation that pitch is better than the one that can be hit over a wall. Pitching is a pretty simple discipline when you don’t overthink it. I’m not a coach, but as Captain it’s my responsibility to take Tanaka’s translator aside and tell him that from now on, every English sentence he hears on the mound becomes “Throw the splitter.”

Sunday, June 29: vs. Boston Red Sox
You look across the field at this Red Sox team and you wonder if that’s an organization that’s going in the right direction. They’re playing rookies everywhere. That’s not something you do in the AL East. You need to have a veteran out there at every position, current and former All-Stars, to stay competitive in this division. Sure, you keep some kids around to keep the established guys honest and to give the older guys an occasional rest, but you can’t run four or five of them out there at a time before they’re ready. They need to sit and learn before they’re prepared to contribute on an everyday basis. Nobody handed me the starting shortstop job when I first came up. Mo set up John Wetteland. Jorgie was a backup to Girardi. Andy earned a rotation spot. That’s the way you build a winner.

You can’t force a dynasty. You just have to be patient and hope your group of once-in-a-generation talent all matures at the same time and starts winning you championships.

Good luck to that new Mookie kid they just brought up, though. You suppose they didn’t have anyone in the system named Boone or Fucking Bucky, but maybe they’ll get those in next year’s draft.

Monday, June 30: vs. Tampa Bay Rays
The offense continues to be a concern. We score three runs and it feels like 10, and still it’s not enough, not even in extra innings. You have to believe the hitting will come around, though. Our hitters have very long track records of success. Guys don’t age overnight. That’s a process that takes many years. Beltran’s about to get hot again. Soriano didn’t suddenly wake up in May and forget how to crush the fastball he’s blindly guessed correctly. McCann’s not a .200 hitter with an $85 million paycheck; he’ll get his .250 and another 10 homers before all is said and done, making that contract look exactly as reasonable as it is in our prospering game. Brian Roberts, well. Brian Roberts hit a homer in the bottom of the ninth to send us to extras, so he’s probably set for a month.

Tuesday, July 1: vs. Tampa Bay Rays
What a crushing loss for America in the World Cup. You feel for the guys on the U.S. team who made such a heroic run and made us all so proud. They’re warriors out there doing their best against countries that actually care about soccer all the time.

But this is why you love baseball, the greatest sport in the history of the world: We play games every single night from April through October, not just once every four years.

And they all count.

Gerald McCoy Is Really Pumped to Play for Lovie Smith, and Quarterbacks Should Be Terrified